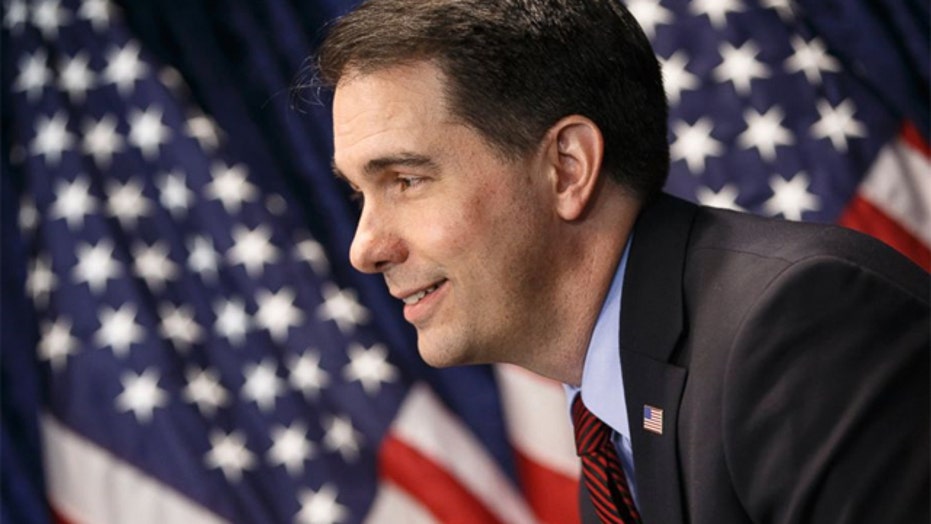 Scott Walker to unveil plan to repeal and replace ObamaCare

Wisconsin Gov. Scott Walker rolled out his first big policy proposal Tuesday in Minnesota as he unveiled his plan to repeal and replace ObamaCare.

Walker said ObamaCare's backwards approach has driven up health care costs and reduced access to medical care for too many people.

The GOP contender's "Day One Patient Freedom Plan" consists of five steps: repealing ObamaCare in its entirety, ensuring affordable and accessible health insurance for everyone, making health care more efficient, effective and accountable by empowering the states, increasing quality and choice through innovation, and providing financial stability for families and taxpayers.

"Simple as this - it starts out with premise on my first day as president, I will send legislation to once and for all repeal ObamaCare entirely," Walker said at a speech in at Minnesota warehouse.

In order for Walker to repeal ObamaCare, he would need at least 60 votes in the Senate, which currently has only 54 Republicans. Even that number could decrease after next November's election.

Walker's plan includes providing refundable tax credits to individuals who do not have employer-based coverage to make health insurance more affordable, allowing Americans to shop for insurance across state lines, and continuing to protect all Americans with pre-existing conditions.

The plan would also return regulatory authority over health care coverage to the states. "The past five years have clearly demonstrated that giving Washington top-down control over regulating health care coverage does not work." This would include giving states the ability to run Medicaid and "reorganize it into smaller, focused parts."

Walker would also allow consumers to pool together and purchase insurance as a group.

On his first day in office as Wisconsin governor in 2011, Walker joined Florida's lawsuit against the Affordable Care Act. The second-term governor did not expand Medicaid in Wisconsin under the ACA, while also refusing to set up a state exchange.

As for how his plan would be paid for, Walker said it would not be funded through new taxes and mandates despite his plan to repeal all of the ACA's $1 trillion in new taxes. "To offset these improvements," the plan said,"we would simplify and reform how the federal government helps people access health insurance."

Walker also didn't hold back against Democratic front-runner Hillary Clinton, warning that if she is elected, "Americans could expect proposals [similar] to Europe's single-payer system," and that Obamacare's "many pillars ... can be traced to 'HillaryCare,' Hillary Clinton's 1993 health care plan."

Clinton has called ObamaCare "imperfect" in the past, but has come to its defense in recent months, saying that Republicans should "move on" from their repeated attempts to repeal it.

The Walker campaign says it chose Minnesota for the rollout because it is an early presidential nominating state and has a large medical industry presence.