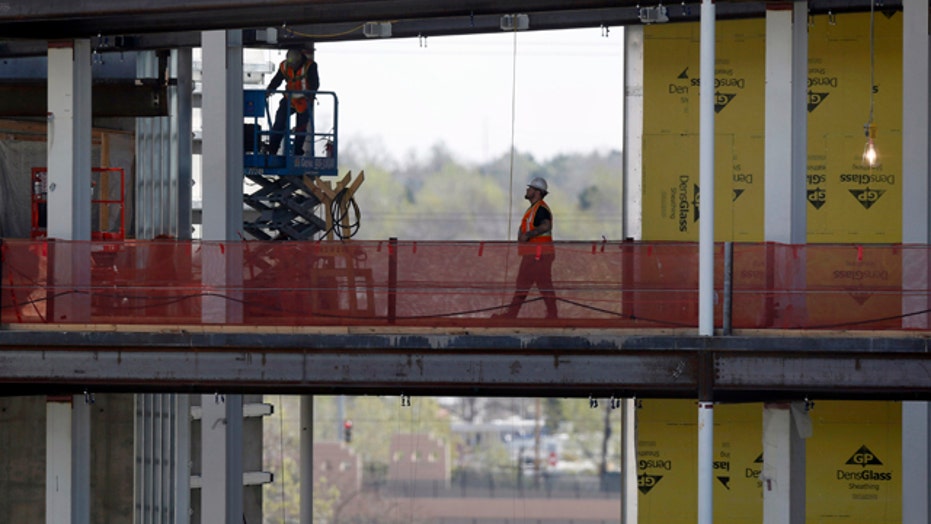 Veterans Affairs officials and Congress battle over funding for hospital in Aurora, Colo.

Nearly one year after a new VA secretary vowed to clean up a broken health care system for America's veterans, a vital new hospital hangs in the balance as lawmakers and the agency fight over how to pay for it.

The dispute came to a head this week as construction on the medical center in Aurora, Colo., was poised to grind to a halt Sunday without congressional approval for more spending beyond the current $800 million.

Just in time, lawmakers found a stopgap solution. After what one aide called grueling discussions between lawmakers and the VA, the House on Thursday was able to pass a temporary fix that would keep things moving -- for three more weeks. The Senate followed suit late Friday afternoon.

But for a project whose estimated costs have ballooned to $1.73 billion, the funding Band-Aid does not solve the long-term issue.

"This is by no means a solution to the problems in Denver, which VA leaders created and are refusing to take responsibility for," said Rep. Jeff Miller, R-Fla., chairman of the House Veterans Affairs Committee. "Rather it is a last-chance effort to convince VA and Obama administration leaders to take the department's problems seriously."

The latest agreement would raise the authorization cap to $900 million, though the estimated price tag for the hospital is expected to hit $1.7 billion. According to a spokesman for Rep. Mike Coffman, R-Colo., who was against stopping construction for any reason, the deal would hand the VA another $20 million for now, as the project had already reached $880 million in costs since it began.

"The VA ignored my warnings for two years that the Aurora hospital was out-of-control and their refusal to heed my warnings has made a bad situation much worse," Coffman said in a statement on Thursday.

The hospital is meant to replace the city's aging, overcrowded facility, and could help relieve a system whose long wait times were at the center of last year's scandal over veterans' care. But the stand-off over construction was just the latest problem for the over-budget, behind-schedule project beset by allegations of waste and mismanagement.

Original designs for the hospital, which is supposed to include a series of nearly a dozen outbuildings for specialty care, estimated a total cost of $328 million. Further changes led Congress to authorize $568 million for the project, and last year, the VA was still saying the facility would cost $630 million, and be complete in 2015. When it was clear the campus could not be finished for under $1 billion, the general contractor, Kiewit-Turner, walked off the job and sued the VA. A panel of judges sided with the contractor in December 2014. The project is now under the auspices of the Army Corps of Engineers.

As the project was turned over to the Army, VA Deputy Secretary Sloan Gibson apologized for the mess. "I apologize to veterans and to American taxpayers for the delays and the added costs," he said at an April 2 news conference, blaming a lack of communication with planners and incomplete designs at the outset, among other things.

Both sides in the VA-Congress dispute have been pointing the finger.

"Right now, VA is essentially asking taxpayers to bail it out of a massive problem of the department's own creation," Miller said in a lengthy letter to VA Secretary Bob McDonald on May 20.

Miller and others had been willing to turn off the spigot and let work stop this weekend on the project, which has been in the works since 2004. He's going along with the stopgap plan, but he and other lawmakers say they are still waiting for the VA to offer a plan for how it would pay for the rest of the construction.

Rep. Tim Huelskamp, R-Kan., who sits on the same committee, told FoxNews.com that the three-week extension is a Band-Aid, and he is firmly against continued funding if the VA does not show willingness "to pay for their mistakes and their screw ups."

"They need to go back to the drawing board," he said. "And I just don't see a bail-out coming from the House."

But McDonald, who officially replaced former Secretary Eric Shinseki in July 2014 after it was revealed workers were falsifying records to cover up long wait times, rejected the idea that the VA has not offered detailed options on how to pay for the project.

"I have provided multiple proposals ... the options were rejected and the result has been inaction. Our veterans deserve better than that," he said in a statement Wednesday. "I have presented a plan. Congress has not proposed a counter plan."

McDonald said the VA wants to repurpose and reallocate fiscal 2015 funds. Lawmakers want to make sure the VA won't take money away from other projects or services for veterans to do that. There was talk earlier about dipping into the $5 billion fund that offers private care to veterans who need it, but that was opposed by lawmakers who told the VA it would have to concentrate on cost-cutting measures and other solutions. Lawmakers like Huelskamp and Coffman have suggested the money come out of top employee bonuses.

Glenn Haggstrom, the VA construction chief, who earned $64,000 in bonuses as he was overseeing the project, was pushed into retirement in March. Critics said Haggstrom, though, should have been available for an ongoing investigation and instead was going home with a fat pension.

"To date, not a single person has been fired for this blatant waste of taxpayer money," Miller said in his letter to the secretary. A Government Accountability Office (GAO) report in 2013 on the VA's largest medical center projects, including the Denver facility, showed that combined, all four were responsible for $1.5 billion in cost overruns and were an average of three years behind schedule each.

House Speaker John Boehner expressed frustration Wednesday with what he said was the VA's inability to correct itself over the last year -- not just in the area of construction, but in its long wait times and backlogs for veterans seeking benefits and care.

"At this point, the VA can't even build a hospital," he said on the House floor.