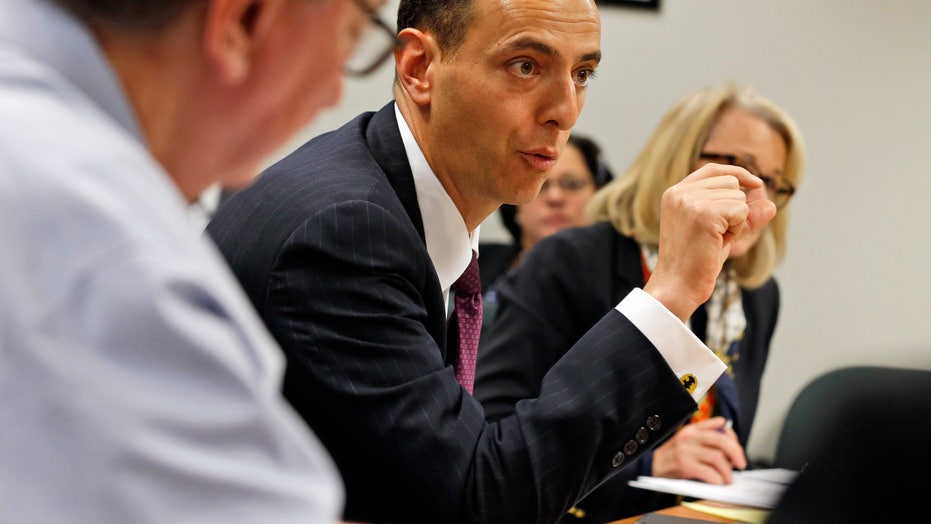 A white Virginia state trooper yells an expletive-laden threat at a Black motorist who refuses to get out of his car during a traffic stop. Smiling for the driver's cellphone camera, the trooper remarks, “Watch the show, folks,” then yanks the man out of his car by his neck.

The video sparked outrage in Virginia, but under current state law, the trooper's conduct — unless he's later convicted of a crime — is not grounds for disqualifying him from working in law enforcement.

State lawmakers are now pushing for changes to make it easier to decertify problem police officers and more difficult for them to hop from department to department. Their actions echo those of state lawmakers across the country who are tackling police reform amid nationwide protests sparked by several recent killings of Black people by police.

FILE - In this Feb. 4, 2016, file photo, Del. Marcus Simon D-Fairfax, speaks during a meeting of the Privileges and Elections subcommittee at the Capitol in Richmond, Va. A bill making its way through the House would require police chiefs to notify the Criminal Justice Services Board or a civilian review panel if an officer has received three complaints of excessive force in the previous five years. Simon, the bill's chief sponsor, said three complaints would not automatically trigger a decertification hearing, but would act as an "early warning system" to detect a pattern that requires further investigation and could lead to decertification. (AP Photo/Steve Helber, File)

"The legislation has received pretty overwhelming bipartisan support in some states and it's moved at a pace that is unprecedented,” said Amber Widgery, a policy analyst at the National Conference of State Legislatures.

Critics of current decertification laws say part of the problem is there is no official national database that lists all officers who have had their licenses revoked.

The nonprofit International Association of Directors of Law Enforcement Standards and Training maintains a national registry of certificate and license revocations, but submitting names to the index is voluntary. The National Decertification Index currently provides access to police agencies to decertification records from 44 states. Georgia does not contribute the names of decertified officers to the index, while five states — California, Hawaii, Massachusetts, New Jersey and Rhode Island — currently have no decertification process.

As it stands now, police officers in Virginia can’t lose their licenses unless they’re convicted of a crime, test positive for drugs or fail to complete mandatory training. Like many other states, Virginia doesn’t decertify officers for misconduct that doesn’t rise to a criminal level.

Virginia police chiefs worked with Democratic senators on a bill that adds the use of excessive force and lying as grounds for decertification. The proposal is included in an omnibus police reform bill approved by the Senate on Thursday.

“We think those two things cover the vast majority of concerns from the public when it comes to reforming the professional conduct of police officers,” said Dana Schrad, executive director of the Virginia Association of Police Chiefs.

The bill allows for decertification if an officer is fired or resigns for compromising police credibility, integrity or honesty based on statewide professional standards of conduct. Currently, if an officer resigns in the middle of a decertification proceeding, the process ends without an official finding, a loophole that critics say allows an officer to find a job with another law enforcement agency.

FILE - In this Sunday, May 31, 2020, file photo, police in riot gear advance on protesters as they attempt to clear the streets in Richmond, Va. Virginia lawmakers are pushing for changes to make it easier to decertify problem police officers and more difficult for them to hop from department to department. (AP Photo/Steve Helber, File)

“This is a fast-track mechanism to really prevent bad officers — bad actors — in our profession from going from place to place to place and continuing to have poor performance,” said Ashland Police Chief Doug Goodman.

A separate bill recently passed by the House of Delegates would require police chiefs to notify the state board responsible for decertifying police or a civilian review panel if an officer has received three complaints of excessive force in five years. The bill's chief sponsor, Del. Marcus Simon, said three complaints would not automatically trigger a decertification hearing, but would act as an “early warning system” to detect a pattern that requires further investigation and could lead to decertification.

“There are too many loopholes. It is too easy to step off the train and go someplace else,” Simon said, referring to the ease with which officers cited for questionable conduct are currently able to join a different police department.

FILE - In this Wednesday, Aug. 19, 2020, file photo, Sen. Mamie Locke, D-Hampton, speaks during a Senate session in the temporary chambers at the Science Museum of Virginia in Richmond, Va. Virginia police chiefs worked with Democratic senators on a bill that adds the use of excessive force and lying as grounds for decertification. The proposal is included in an omnibus police reform bill sponsored by Locke. (AP Photo/Steve Helber, Pool, File)

Under Simon's bill, police chiefs and sheriffs are required to notify the criminal justice board within two days after an officer has been fired for misconduct. The board is then required to begin decertification proceedings.

The police benevolent association wants to ensure that citizen complaints against officers are investigated to make sure they are legitimate and not just based on anger over an arrest.

“We don’t have an issue with decertification proceedings, as long as there is due process involved for the officers,” said Sean McGowan, executive director of the Virginia Division of the Southern States Police Benevolent Association.

“If a complaint is unfounded and not sustained, that should certainly be considered,” he said.

The changes being proposed in Virginia are part of a package of criminal justice reforms proposed around the country after the death of George Floyd, a Black man who died under the knee of a white Minneapolis police officer in May.

In the meantime, Virginia state police are also investigating a traffic stop involving Trooper Charles Hewitt. In a video captured on driver Derrick Thompson's cellphone, Hewitt can be heard yelling, “You’re going to get your ass whooped in front of (expletive) Lord and all creation.”

The traffic stop took place in April 2019, but the details did not become public until July, when Thompson's lawyer shared the video on Twitter.

Police said Thompson had an expired inspection sticker, and that he refused to get out of his car after being stopped. They also said he was driving on a suspended license.

Hewitt has been placed on administrative leave pending a state police investigation. He did not respond to an email and text message seeking comment.