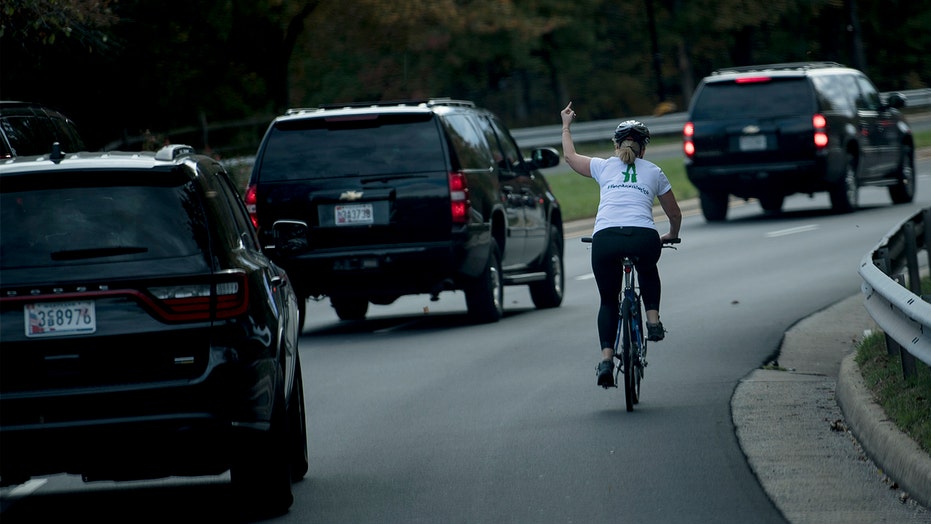 The female cyclist who flipped off President Trump’s motorcade last year unseated the Republican incumbent in a local election in Northern Virginia on Tuesday.

Juli Briskman, 51, ran against Suzanne M. Volpe, a Republican who represents the Algonkian District on the Loudoun County Board of Supervisors.

FEMALE CYCLIST WHO FLIPPED OFF TRUMP'S MOTORCADE IS RUNNING FOR OFFICE

Republicans have dominated the board in an otherwise blue county that has largely voted for Democratic candidates in state and federal elections. In 2016, Hillary Clinton won the county by 17 percentage points.

"We worked hard to flip his seat and unseat an eight-year incumbent," Briskman said in a statement. "I’m looking forward to working with the new board to make better decisions on schools, intelligent development and gun-sense issues."

Briskman launched her campaign for office after she was fired from a government contracting firm for violating the “code-of-conduct policy." She'd revealed to her bosses at Virginia-based Akima LLC that she was the woman in a viral photo on social media who was flipping off President Trump's motorcade.

Juli Briskman gestures with her middle finger as a motorcade with President Trump passes by in Virginia in 2017. (Getty Images)

An individual on behalf of Briskman launched a crowdfunding campaign for her, which raised nearly $140,000 in donations, and Briskman unsuccessfully sued the company for violating her First Amendment rights. “We have a right to peacefully protest and criticize and express dissent toward our government,” she told The Washington Post at the time.

"I think the Constitution grants me that privilege,” she said.

After her case was dismissed, she announced that she would run for local office “because I feel I can more successfully effect change by serving in local government than by fighting an uphill battle in unfriendly courts,” she wrote in a post on her crowdfunding page.