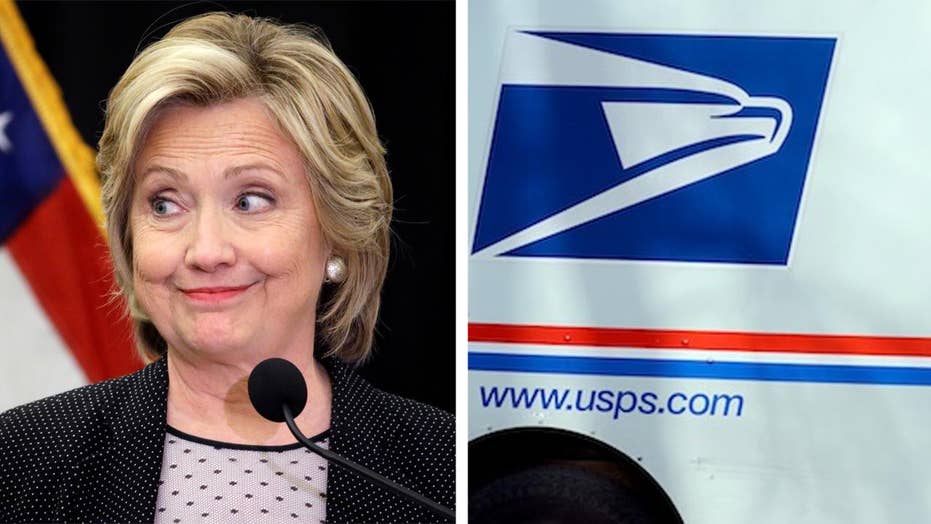 The United States Postal Service violated federal law by letting employees do union-funded work for Hillary Clinton's campaign and other Democratic candidates while on leave from the agency, according to an Office of Special Counsel report obtained by Fox News.

The OSC determined the USPS "engaged in systemic violations" of the Hatch Act, a federal law that limits certain political activities of federal employees. While employees are allowed to do some political work on leave, the report said the Postal Service showed a "bias" favoring the union's 2016 campaign operation.

The investigation was launched months ago after Senate Committee on Homeland Security and Governmental Affairs Chairman Ron Johnson, R-Wis., brought constituent complaints to the OSC in October. The constituent, identified as a USPS employee, was concerned the Postal Service “incurred unnecessary overtime costs” and “improperly coordinated” with the National Association of Letter Carriers (NALC) when it released members for several weeks of “union official” leave without pay to participate in campaign work.

“The Labor 2016 program sought to ‘elect Hillary Clinton and pro-worker candidates across the country,’” the report said, citing campaign work like door-to-door canvassing, phone banks and other get-out-the-vote efforts.

HILLARY CLINTON SIDED WITH RUSSIA AS BILL MADE $$ IN MOSCOW

According to the report, roughly 97 NALC members requested the leave without pay to participate. The NALC, which endorsed Clinton last June, compensated those USPS workers using the Letter Carrier Political Fund, the union’s PAC.

According to the report, 82 percent of the work took place in 2016 battleground states: Florida, Nevada, North Carolina, Ohio, Pennsylvania and Wisconsin.

According to OSC Acting Special Counsel Adam Miles, the NALC provided lists of letter carriers to participate in campaign activity to a senior headquarters USPS labor relations official, who then emailed the lists to other USPS officials across the country. According to Miles, the local officials “interpreted the communications as directives” from USPS headquarters to release the carriers on union official leave without pay.

According to the report, local supervisors raised concerns about the impact this would have on postal operations and initially objected to releasing them, but USPS managers instructed local supervisors to let the workers participate.

“We concluded that the USPS practice of facilitating and directing carrier releases for the union’s political activity resulted in an institutional bias in favor of NALC’s endorsed political candidates, which the Hatch Act prohibits,” Miles said in prepared testimony before the Senate Homeland Security Committee, which is set to hold a hearing Wednesday on the matter.

But USPS Postmaster General Megan Brennan said that “senior postal leadership did not in any way guide union leadership in selecting the candidates for whom NALC employees could campaign” and that USPS “did not approve or choose candidates for the unions to support” or “ask the union to advocate for political candidates on behalf of the Postal Service.”

“I also note that our postal unions do not speak for the Postal Service, and the Postal Service does not speak for our unions,” Brennan wrote in her prepared testimony, insisting USPS did not seek to assist the NALC’s “favored candidates.” “This especially applies in a political context, but it is inherent in any collective bargaining relationship.”

Brennan said that the practice to grant leave without pay for NALC political activity has been in place for approximately 20 years, but that all violations of the Hatch Act were “unintentional.”

“We will change our practice in consultation with the OSC and based upon OSC’s guidance. This will ensure that we do not put our people in harm's way and they do not unintentionally run afoul of the Hatch Act,” Brennan said. “As we have previously communicated to both this committee and to the OSC, and as the OSC has acknowledged, the Postal Service has always been ready, willing and able to end or modify our practice as appropriate, consistent with OSC’s recommendation.”

HATCH ACT EXPLAINED: WHAT IS THE FEDERAL LAW?

Miles, in his prepared remarks, said the OSC investigation revealed the NALC-USPS practice is “long-standing, going back many election cycles, and perhaps started in the 1990s.”

“As a federal entity, the USPS must remain politically neutral,” Miles' testimony said. “In many localities, the Postal Service is a citizen’s primary point of contact with the federal government, reinforcing the need for strict adherence to the letter and the spirit of the Hatch Act.”

OSC recommended in the report that, going forward, USPS management should not require, direct or suggest local supervisors release union members to engage in political activity.

Miles added: “OSC has communicated these recommendations to USPS, and agency representatives appear ready to take the steps necessary to comply with the Hatch Act.”