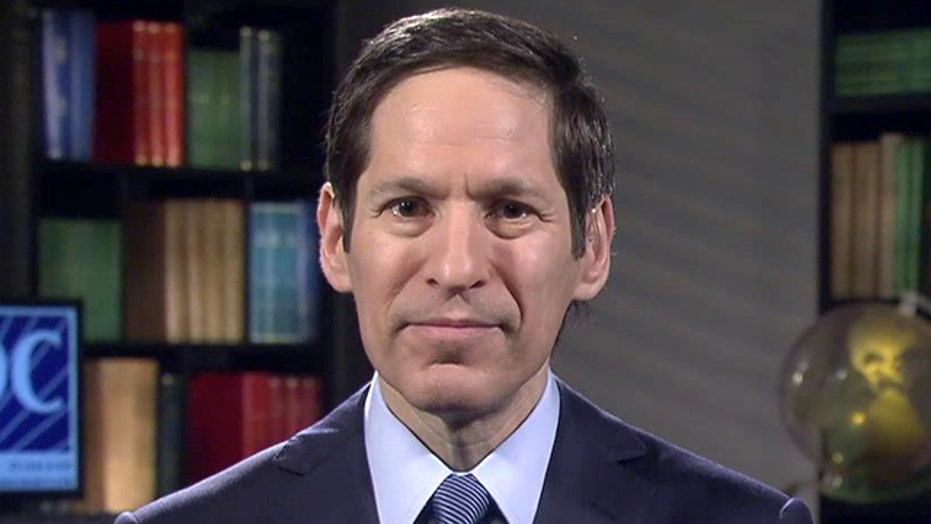 CDC director to meet with Obama over Ebola prevention plan

Dr. Tom Frieden to discuss next steps with president

President Obama announced Monday, after meeting with top health and security officials about the Ebola outbreak in Africa, that the U.S. government is preparing additional measures to screen passengers in the U.S. and overseas as part of the expanding effort to contain the virus.

"We're ... going to be working on protocols to do additional passenger screening both at the source and here in the United States," the president said.

Obama did not specify what exactly those measures would be. But two top U.S. health officials told Fox News earlier Monday that they were looking specifically at the issue of "entry screening" -- or screening for passengers arriving from Ebola-stricken African nations.

Dr. Anthony Fauci, director of the National Institute of Allergy and Infectious Diseases, explained that the first line of defense right now is for travelers to be screened when they attempt to leave the affected African nations. Officials have said dozens of travelers have been stopped from boarding this way after they exhibited symptoms at these departure points.

Fauci said the president and his team are now looking at imposing an extra layer of screening -- by instituting new measures at U.S. airports.

Dr. Tom Frieden, of the Centers for Disease Control and Prevention, also confirmed that officials are "looking at those possibilities and others as well."

He confirmed the extra screening might include asking travelers who they had contact with and checking to see if they have a fever.

After his meeting, Obama tried to assure Americans that the chance of an outbreak in the U.S. is "extremely low." He said procedures are in place to "rapidly evaluate" those with symptoms.

Amid widespread public concern, the Obama administration has said that it won't shut down flights from affected countries, particularly those in West Africa, arguing this would be counterproductive by restricting aid flights.

Fauci reiterated that point Monday, and Frieden also alluded to it on Fox News.

"Nothing's off the table in terms of keeping Americans safe, except doing things that might actually backfire," Freiden said.

But some lawmakers have called for the Obama administration to at least consider the possibility of a travel ban, considering the first diagnosed case of Ebola in the United States was confirmed last week in spite of existing measures.

"I am deeply concerned that Administration officials are not engaging in a discussion of travel restrictions from the Ebola 'hot zones' such as Guinea, Liberia and Sierra Leone," Rep. Tim Murphy, R-Pa., who has called a hearing for Oct. 16, said in a statement on Friday. "Travelers self-reporting at the airport has been a demonstrated failure and it is nearly impossible to retrace steps to try and track down everyone who has been in contact with a carrier taking multiple international flights across the globe."

House Homeland Security Committee Chairman Michael McCaul, R-Texas, meanwhile, has called a hearing for this Friday in Dallas on Ebola.

The Ebola outbreak is believed to have killed more than 3,400 people in West Africa and has taken the biggest toll in Liberia. There aren't enough beds in isolation units to keep up with the hundreds who get sick each week.

The U.S. military is beginning work in the Liberian capital Monrovia on the main structure of the 25-bed clinic that will treat health care workers infected with Ebola. The U.S. has also promised to build 17 other Ebola treatment centers, which would have space for 100 patients each.