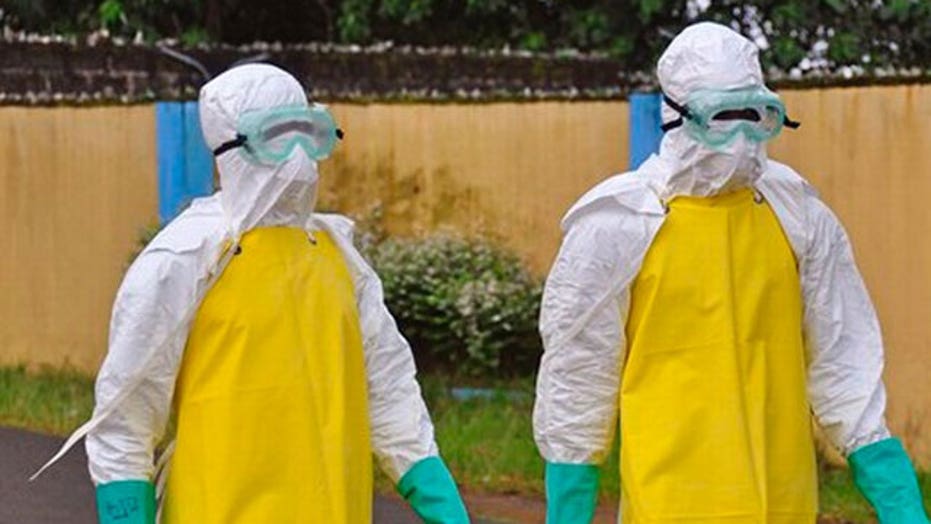 President Obama is expected to announce Tuesday that he's sending up to 3,000 military personnel to combat the Ebola virus in West Africa.

Obama will announce the stepped-up offensive against the outbreak, which has killed more than 2,200 people in five West African countries, in an appearance at the Centers for Disease Control and Prevention in Atlanta.

Administration officials said that the U.S. would help to provide medical and logistical support to overwhelmed local health care systems and to boost the number of beds needed to isolate and treat victims of the epidemic. The Defense Department has asked Congress for nearly $500 million in existing funds to be put toward the effort. The money would otherwise be used to support overseas contingency operations, such as the drawdown of troops in Afghanistan.

The new initiatives include training as many as 500 health care workers a week; erecting 17 heath care facilities with approximately 100 beds each; setting up a joint command headquartered in Monrovia, Liberia, to coordinate between U.S. and international relief efforts; providing home health care kits to hundreds of thousands of households, including 50,000 that the U.S. Agency for International Development (USAID) will deliver to Liberia this week; and carrying out a home- and community-based campaign to train local populations on how to handle exposed patients.

The fight against Ebola is considered, in part, a national security issue because the disease threatens fragile governments in Africa and could lead to more safe havens for terrorists. The request falls under the jurisdiction of the Pentagon because the military has the capacity to set up quarantine camps.

Sources told Fox News on Monday that the request is expected to be discussed Tuesday at the Senate Armed Services Committee hearing with Defense Secretary Chuck Hagel and Joint Chiefs of Staff Chairman Gen. Martin Dempsey. But the sources said they believe the requested amount is a lot to reprogram.

Officials told the Associated Press that it would take about two weeks for U.S. forces to get on the ground. The U.S. effort will include medics and corpsmen for treatment and training, engineers to help erect the treatment facilities and specialists in logistics to assist in patient transportation.

The Obama administration’s decision to enlist the Defense Department in responding to the Ebola outbreak in West Africa has raised concerns that the task is pulling the already-stretched military away from other missions, including vital counter-terrorism operations.

According to a senior military official, Dempsey said at a recent meeting: "The Department of Defense's number one priority is combating Ebola."

However, a Defense Department source told Fox News last week that alarms had been raised about the decision.

“We don’t need to be taking planners away from the CT [counterterrorism] mission, and that is what is going on,” the Defense Department source said.

USAID and the Centers for Disease Control and Prevention are already involved.

The death toll in the Ebola outbreak is expected to reach 10,000 before six months from now, and some estimates believe it will reach 500,000 before it’s over. Hardest hit by the outbreak are Liberia, Sierra Leone and Guinea. The virus also has reached Nigeria and Senegal. Ebola is spread through direct contact with the bodily fluids of sick patients, making doctors and nurses especially vulnerable to contracting the virus that has no vaccine or approved treatment.

Four Americans, including three doctors, have been or are being treated for the virus in the U.S.

Sen. Lamar Alexander, R-Tenn., the senior Republican on the Senate's health committee, said Monday that the U.S. must take the Ebola threat as seriously as it does the Islamic State terrorist group. He added that he would support the Obama administration's request for $30 million for the CDC and $58 million for the Biomedical Advanced Research and Development Authority in an upcoming bill.

“This is an instance where we should be running toward the burning flames with our fireproof suits on," Alexander said in a statement. "This is an emergency. We need to recognize it, and we need to find and work with other countries in the world that recognize it.”

On Monday, U.S. Ambassador to the United Nations Samantha Power called for an emergency meeting of the U.N. Security Council on Thursday, warning that the potential risk of the virus could "set the countries of West Africa back a generation."

Power said the meeting Thursday would mark a rare occasion when the Security Council, which is responsible for threats to international peace and security, addresses a public health crisis.

U.N. Secretary-General Ban Ki-moon was expected to brief the council along with World Health Organization chief Dr. Margaret Chan and Dr. David Nabarro, the recently named U.N. coordinator to tackle the disease, as well as representatives from the affected countries.