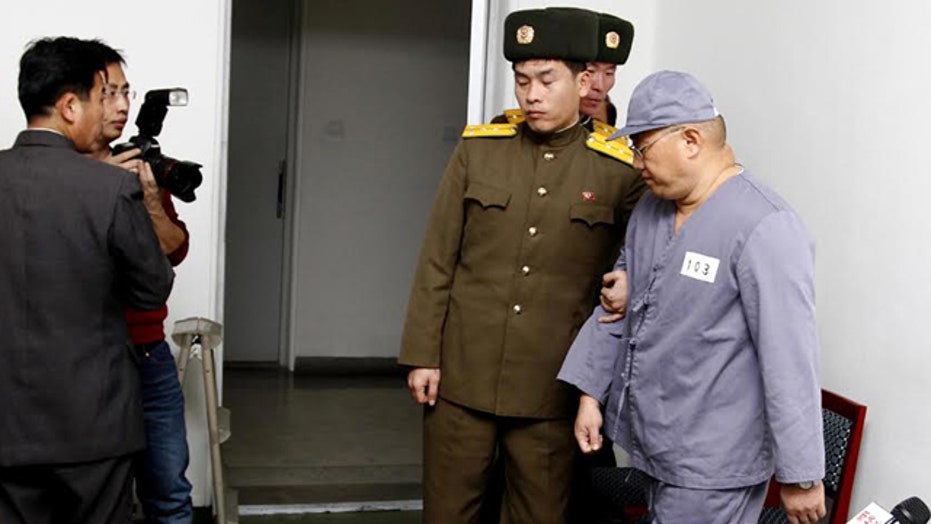 The Obama administration has offered to send an envoy to North Korea to secure the release of American missionary Kenneth Bae after he appeared in front of reporters urging action from Washington, The Wall Street Journal reported Monday.

"We hope this decision by DPRK authorities to allow Kenneth Bae to meet with reporters signals their willingness to release him," an administration official told the newspaper.

Robert King, the U.S. special envoy for North Korea, had planned to visit North Korea in late August to discuss Bae's release, but Pyongyang withdrew its invitation at the last minute, accusing the United States of hostility.

"We have offered to send Ambassador King to Pyongyang to secure Mr. Bae's release. We have asked the North Koreans this, and await their early response," the official said Monday.

Bae's sister echoed her brother's apology to the nation for crimes he committed and his plea to the U.S. government to ramp up efforts to secure his release.

In a statement released Monday after Bae's brief news conference, Terri Chung of Edmonds, Wash., said, "We understand that Kenneth has been convicted of crimes under DPRK laws. Our family sincerely apologizes on Kenneth's behalf."

She said to North Korea's leaders: "We humbly ask for your mercy to release my brother." The family is concerned about Bae's health, and Chung said she could "see that he was distressed."

Earlier this month, Chung said Bae did nothing wrong. At the press conference that Bae said was held at his request, Bae pointed to a comment by U.S. Vice President Joe Biden last month as having made his situation more difficult.

"The vice president of the United States said that I was detained here without any reason," Bae said. "And even my younger sister recently told the press that I had not committed any crime and I know that the media reported it.

"I think these comments infuriated the people here enormously. And for this reason, I am in a difficult situation now. As a result, although I was in medical treatment in the hospital for five months until now, it seems I should return to prison. And moreover there is greater difficulty in discussions about my amnesty."

Bae was arrested in November 2012 while leading a tour group and accused of crimes against the state before being sentenced to 15 years of hard labor. He was moved to a hospital last summer in poor health.

At the press conference Monday, Bae apologized and said he committed anti-government acts. He wore a gray cap and inmate's uniform with the No. 103 on his chest and was under guard during the appearance. It is not unusual for prisoners in North Korea to say after their release that they spoke in similar situations under duress.

Bae spoke in Korean during the brief appearance, which was attended by The Associated Press and several other members of the foreign media in Pyongyang.

Bae, the longest-serving American detainee in North Korea in recent years, expressed hope that the U.S. government will do its best to win his release. He said he had not been treated badly in confinement.

"I believe that my problem can be solved by close cooperation and agreement between the American government and the government of this country," he said.

In her statement, Chung thanked U.S. leaders for their efforts so far, but called for an increased push to secure her brother's release.

In Washington, State Department spokeswoman Jen Psaki said the U.S. government was continuing to work with the Swedish Embassy on getting Bae freed.

"As we have said before, we remain very concerned about Kenneth Bae's health," Psaki said. "We continue to urge the DPRK authorities to grant Bae amnesty and immediate release."

Bae's appearance came weeks after North Korea freed an elderly American veteran of the Korean War who had been held for weeks for alleged crimes during the 1950-53 conflict.

State media said 85-year-old Merrill Newman was released because he apologized for his wrongdoing and that authorities also considered his age and medical condition. Newman said after his release that a videotaped confession was made under duress.

North Korea has detained at least seven Americans since 2009. They were eventually deported or released without serving out their terms, some after prominent Americans such as former presidents Bill Clinton and Jimmy Carter traveled to Pyongyang.

A senior U.S. envoy had planned to visit North Korea in late August to discuss Bae's release, but Pyongyang withdrew its invitation at the last minute, accusing the United States of hostility. Analysts said North Korea was apparently trying to gain leverage in a long-running international standoff over its nuclear weapons program.

"We shouldn't take Kenneth Bae's comments merely as his own," said Kim Jin Moo, a North Korea expert at the South Korean state-run Korea Institute for Defense Analyses in Seoul. "The reason why North Korea had Kenneth Bae make this statement ... is that they want Washington to reach out to them."

Other foreign analysts say North Korea wants better ties with Seoul and Washington as a way to win foreign aid and investment to boost its economy.

Bae's detention was in the news earlier this month after former basketball star Dennis Rodman traveled to Pyongyang with other retired NBA players for an exhibition game marking the birthday of North Korean leader Kim Jong Un. In an interview with CNN while in Pyongyang, Rodman made comments implying Bae was at fault.

Rodman, who has been criticized for not using his ties with Kim to help secure Bae's freedom, later apologized.

Bae was born in South Korea and immigrated to the United States in 1985 with his parents and sister. He was allowed to call home on Dec. 29 because of the holidays, according to his sister. That was the first time his three children from an earlier marriage had spoken to him, she said. He has two children in Arizona and another in Hawaii, ages 17, 22 and 23, Chung said.

Chung said Monday that it was difficult seeing him in his prison uniform, number 103.

"My brother is not a number to me, or to the rest of his family," she said. "He is a kind and loving husband, father, son and brother -- and needs to be home immediately."