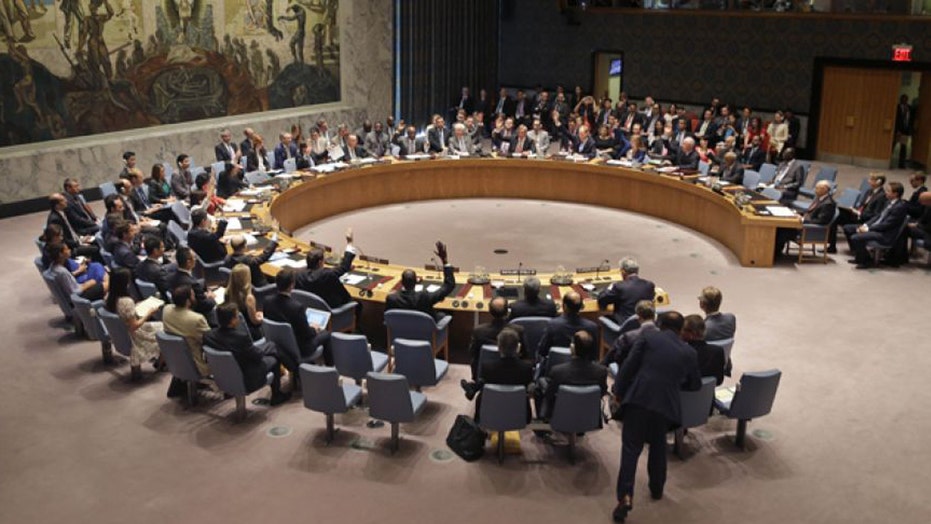 Report: US may abstain from UN vote condemning Cuba embargo

WASHINGTON – For the first time, the United States may be willing to accept a United Nations condemnation of the U.S. trade embargo against Cuba without a fight, The Associated Press has learned.

U.S. officials tell the AP that the Obama administration is weighing abstaining from the annual U.N. General Assembly vote on a Cuban-backed resolution demanding that the embargo be lifted. The vote could come next month.

No decision has yet been made, said four administration officials who weren't authorized to speak publicly on sensitive internal deliberations and demanded anonymity. But merely considering an abstention is unprecedented. Following through on the idea would send shock waves through both the United Nations and Congress.

It is unheard of for a U.N. member state not to oppose resolutions critical of its own laws.

And by not actively opposing the resolution, the administration would be effectively siding with the world body against Congress, which has refused to repeal the embargo despite calls from President Barack Obama to do so.

Obama has been urging Congress to scrap the 54-year-old embargo since December, when he announced that Washington and Havana would normalize diplomatic relations. The two countries re-opened embassies last month, and Obama has chipped away at U.S. restrictions on trade and travel to Cuba, using executive authorities. But the embargo stands.

The latest U.S. easing of sanctions occurred Friday and was followed by a rare phone call between Obama and Cuban President Raul Castro. Pope Francis, who played a key role in the rapprochement between Havana and Washington, arrived in Havana a day later. He travels to the U.S. this week.

The White House said Obama and Castro discussed "steps that the United States and Cuba can take, together and individually, to advance bilateral cooperation." The Cuban government said Castro "emphasized the need to expand their scope and abrogate, once and for all, the blockade policy for the benefit of both peoples."

Neither statement mentioned the U.N. vote. Yet, as it has for the last 23 years, Cuba will introduce a resolution at the upcoming General Assembly criticizing the embargo and demanding its end.

The United States has lost each vote by increasing margins. Last year's tally was 188-2 in favor of Cuba with only Israel siding with the U.S. This year's vote will be the first since the U.S. shift in policy toward Cuba.

General Assembly resolutions are unenforceable. But the annual exercise has given Cuba a stage to demonstrate America's isolation on the embargo.

The administration has not yet decided how to vote, according to the U.S. officials. They said that at the moment the U.S. is still more likely to vote against the resolution than abstain.

However, the officials said the U.S. will consider abstaining if the wording of the resolution is significantly different than in previous years. The administration is open to discussing revisions with the Cubans and others, they added, something American diplomats have never done before.

"Our vote will ultimately depend on what's in the resolution," one of the officials said. "This resolution is no different than others in the sense that we won't prejudge it before it's final."

An abstention would have political ramifications in the United States, not least among several Republican presidential candidates who want the embargo maintained.

And in Congress, where top GOP lawmakers have refused to entertain legislation that would end the embargo, any administration action perceived as endorsing U.N. criticism of the United States could provoke anger -- even among supporters of the administration's position.

As White House spokesman Josh Earnest noted last week, the embargo remains the law of the land. "We still want Congress to take action to remove the embargo," he said.

The U.S. officials, however, said the administration believes an abstention could send a powerful signal to Congress and the world of Obama's commitment to ending the embargo. Obama says the policy failed over more than five decades to spur democratic change and left the U.S. isolated among its Latin American neighbors.

It's unclear what changes would be necessary to prompt a U.S. abstention.

Last year's resolution cited the "necessity of ending the economic, commercial and financial embargo" and took aim at the Helms-Burton Act. That 1996 law made foreign firms subject to the same restrictions U.S. companies face for investing in Cuba, and authorizes penalties for non-U.S. companies operating and dealing with property once owned by U.S. citizens but confiscated after Fidel Castro's revolution.

A report issued by Cuba last week in support of this year's resolution doesn't suggest Havana is toning down its approach.

It calls American efforts to ease the embargo "a step in the right direction but are limited and insufficient in the face of the magnitude and scope of the blockade laws for Cuba and the rest of the world."

But the 37-page document also claims the embargo has cost the Cuban people $833.7 billion -- a number the U.S. would never accept. Washington says the communist government has used the embargo as an excuse for its own litany of economic failures.