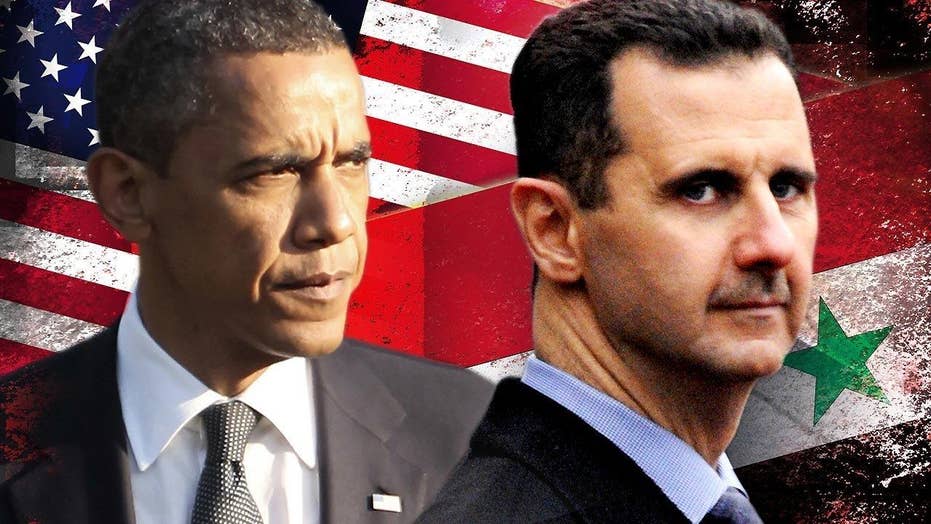 U.S. and Arab officials say the White House secretly communicated for years with members of the Syrian regime in an effort to end the country's ongoing civil war and get President Bashar al-Assad to step down, according to a published report.

The Wall Street Journal reported Wednesday the Obama administration’s effort to communicate with Damascus was extremely limited. Sometimes, senior U.S. and Syrian officials would speak directly to each other; other times, they would speak through intermediaries such as Russia and Iran.

Assad also tried to reach out to the U.S. to entice them to join what he described as Syria’s fight against terrorism, according to the paper.

As anti-Assad demonstrations mushroomed into civil war in 2011, U.S. intelligence began to identify possible replacements for Assad, according to former U.S. and European officials.

“The White House’s policy in 2011 was to get to the point of a transition in Syria by finding cracks in the regime and offering incentives for people to abandon Assad,” a former senior U.S. official told the Journal.

The Obama administration's effort to apply political and military pressure on Assad's regime often hit a wall, according to a former U.S. ambassador to Syria.

“This is a regime that is very supple politically. They’re very smart,” said Robert Ford, former U.S. ambassador to Damascus. “They’re always testing for weaknesses and pushing the envelope.”

As the fighting intensified, the White House issued warnings through Assad’s allies – Russia and Iran – to not use chemical weapons on a large scale, according to U.S. officials. Despite the warnings and the now-infamous red line drawn by President Barack Obama, chemical attacks in August 2013 killed nearly 1,500 people, according to the Journal.

Despite the regime's defiance, the lines of communication between Washington and Damascus reportedly have remained open. The Journal reported that Assistant Secretary of State Anne Patterson has talked with Syrian deputy foreign minister Faisal Mekdad at least twice about the fate of five Americans who are missing or detained in Syria.

Washington's point man to talk with Assad is often Khaled Ahmad, an Assad confidante. Then-Ambassador Ford and Ahmad planned to meet in Geneva, Switzerland ahead of planned peace talks there in 2013. At the time, Ford told Ahmad the U.S. was still seeking a political transition that would allow Assad to step down.

Ahmad, in turn, told Ford the U.S. should help Syria fight extremism. And as ISIS rose to power in Syria and Iraq, Assad found himself with more leverage in negotiations with the West.

The Journal reported as the U.S. expanded airstrikes against ISIS in Syria in 2014, U.S. officials told Syrian forces to stay away from U.S. warplanes.

The White House insists the heads-ups to Syria doesn’t mean the sides are collaborating together. However, not everyone views them that way

“The regime was re-legitimized,” Ibrahim Hamidi, a Syrian journalist who until 2013 ran the Damascus bureau for pan-Arab newspaper Al Hayat told the Wall Street Journal. “Any communication with the U.S.—even the perception of it—gives them the upper hand.”

Earlier this year, former White House official Steve Simon met with Assad and Ahmad in Damascus. Officials familiar with the meetings insisted the meeting wasn’t scheduled on behalf of the U.S., according to the paper. Simon himself also said he planned the meeting without any help from the administration.

The Journal reports Simon outlined plans for Assad to step down and to start making Syria look better in the eyes of the global community.

Assad is reportedly more open to local cease-fires, but insists the focus of the war turn to fighting ISIS.