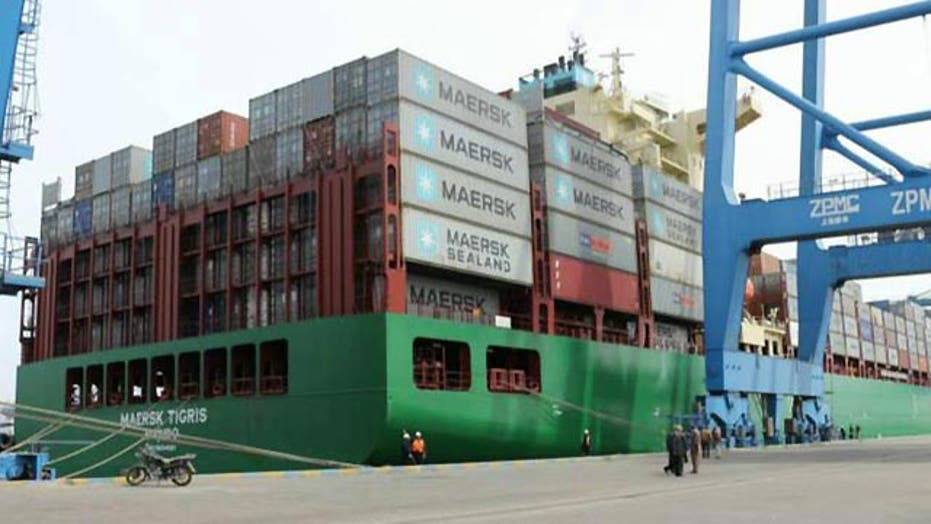 Official: Navy to escort US ships through Strait of Hormuz

U.S. Navy ships will begin to accompany U.S.- and British-flagged commercial ships as they travel the Strait of Hormuz, defense officials confirmed to Fox News, on the heels of Iran seizing a cargo ship.

The Obama administration is closely monitoring Iran's takeover of the ship, as it involved a Marshall Islands-flagged vessel. The Marshall Islands and the U.S. have a longstanding security agreement, and officials said Thursday the two nations are in contact.

But, in a clear response to that incident, a defense official said the U.S. Navy will now accompany all U.S.-flagged ships going through the area, from the Persian Gulf toward the Arabian Sea. Officials said the Navy will also accompany British-flagged vessels. The move is the latest development in a high-stakes chess match in the region, with the Iran nuclear talks continuing to play out in the background.

Cmdr. Kevin Stephens, a spokesman for the U.S. Navy's 5th Fleet based in Bahrain, told Fox News that 20-25 U.S. flagged vessels transit the Strait of Hormuz each month.

He stressed that the U.S. Navy would not be escorting the merchant vessels, but would be "accompanying" them and added, "this is not an everyday thing."

He said each transit of the Strait of Hormuz can last several hours. Land-based Navy P-3 Orion reconnaissance planes and other air assets will also assist in the mission, he said.

When asked how long the U.S. Navy planned to accompany U.S. flagged ships through the strait, Stephens said "we don't have an end date in mind."

He said Secretary of Defense Ash Carter signed off on the order, which came at the recommendation of U.S. Central Command, responsible for the Persian Gulf and surrounding area. The Navy had discussed the idea of with shipping companies and "they all wanted the support," said Stephens.

The Navy already has dispatched a guided-missile destroyer, the USS Farragut, to the region. Pentagon spokesman Col. Steve Warren said Wednesday the destroyer is "keeping an eye on things," and in close enough proximity to the seized ship that they "will be able to respond if a response is required."

When pressed on what kind of incident aboard the ship would elicit a U.S. Navy response, he was vague, saying: "These [U.S. military] assets give commanders options." He said he didn't know "what the possibilities are," and the U.S. government is "in discussions with the Marshall Islands on the way ahead."

Maersk Line, the Danish shipper that chartered the cargo vessel, acknowledged in a written statement that the reason for stopping the ship could be related to a 2005 cargo case.

Maersk Line spokesman Michael Storgaard said the company learned Thursday that an Iranian appeals court had ruled Maersk must pay $3.6 million for a 10-container cargo delivered a decade ago on behalf of an Iranian company in Dubai, United Arab Emirates. However, the cargo never was collected, according to Storgaard, adding it eventually was disposed of by local authorities.

"As we do not have the details of the ruling, we are not able to comment hereon, nor at this point speculate on our options," Maersk Line said of the latest ruling.

"Our paramount concern remains the safety of the crew and the safe release of the vessel. We will continue to do everything we can to resolve this matter with the relevant Iranian authorities."

Storgaard told The Associated Press that the ship and crew aren't theirs. MV Maersk Tigris, operated by Rickmers Ship Management in Singapore, was boarded on Tuesday.

Cors Radings, a spokesman for Rickmers, told Fox News that as of Thursday, there has been no change in the status of the ship and her crew, and that the company has not spoken with the crew in the past 24 hours.