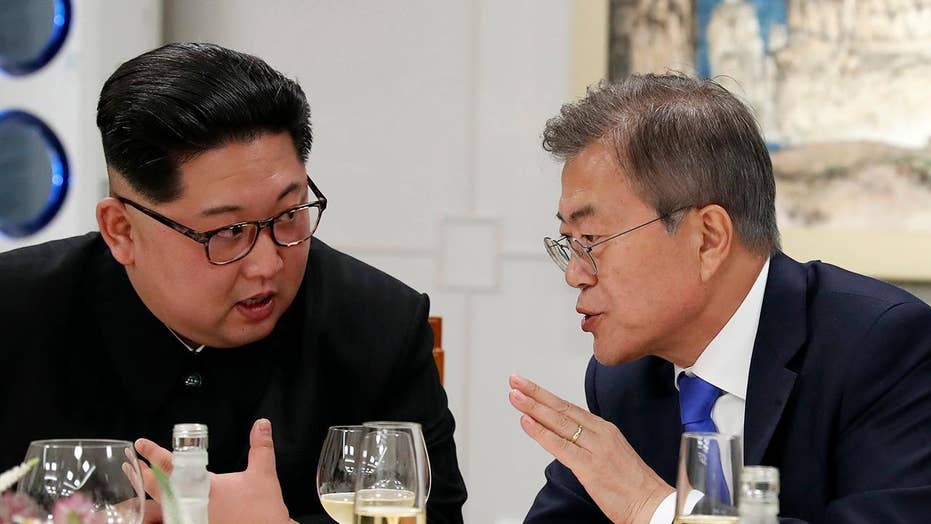 US officials in North Korea to prepare for potential summit

As President Trump has teased a summit between him and North Korean leader Kim Jong Un could still take place, the U.S. on Monday halted new sanctions against the rogue nation, according to The Wall Street Journal.

Citing an unnamed U.S. official, The Journal reported the White House was poised to announce additional sanctions on North Korea as early as Tuesday but decided to hold off on doing so. Trump said Sunday that a U.S. delegation was in North Korea to plan for a potential meeting with Kim.

Trump called off the summit earlier this month following increasingly harsh rhetoric from North Korea. The Treasury Department had come up with new sanctions to levy on almost three dozen targets, including Chinese and Russian entities, according to The Wall Street Journal.

“The goal here is to achieve maximum pressure,” a senior administration official told the newspaper last week. “We’re still short of that.”

Both the State Department and South Korea’s Foreign Ministry said American and North Korean officials have been engaged in talks. Trump said in a Sunday tweet that a U.S. team had “arrived in North Korea to make arrangements for the Summit between Kim Jong Un and myself.”

“I truly believe North Korea has brilliant potential and will be a great economic and financial Nation one day,” Trump said. “Kim Jong Un agrees with me on this. It will happen!”

Trump has said the June 12 summit could still happen in Singapore, even though he called it off on May 24. Kim could see a meeting with Trump as necessary to easing pressure from crushing sanctions and to winning security assurances in a region surrounded by enemies.

WHAT TRUMP, KIM JONG UN WERE EXPECTED TO DISCUSS AT HISTORIC SUMMIT IN SINGAPORE

The new sanctions topped an already mounting list levied against the hermit kingdom.

South Korean President Moon Jae-in had a surprise meeting over the weekend with Kim and said his North Korean counterpart had committed to sitting down with Trump and to “complete denuclearization of the Korean Peninsula.”

Kim, in a dispatch issued by the North’s state-run news service, “expressed his fixed will” on a North Korea-U.S. summit.