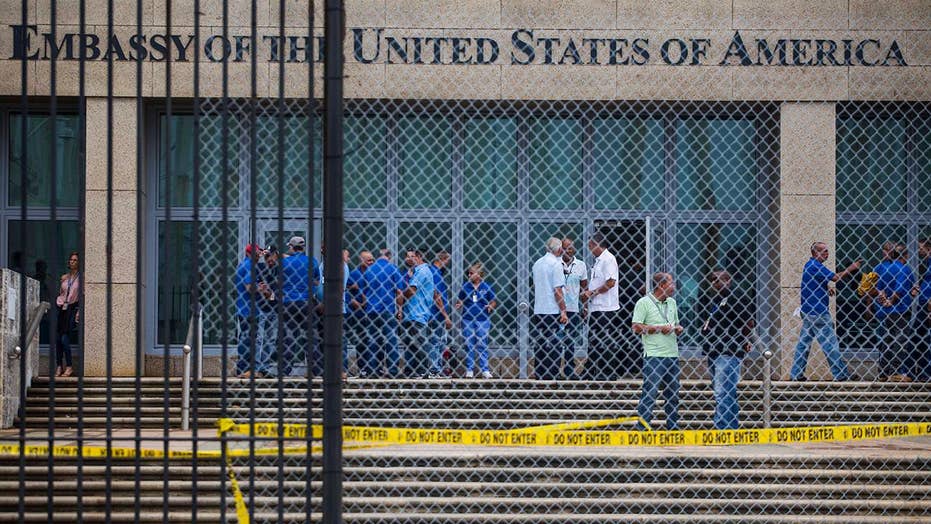 State Department expels 15 Cuban diplomats from the US

Secretary of State Tillerson says the order is in response to Cuba's inability to protect American diplomats in Havana; Rich Edson reports on 'Special Report.'

The U.S. has ordered the expulsion of 15 Cuban diplomats from their embassy in Washington following mysterious attacks on American officials in Havana.

U.S. officials said the diplomats must leave the country within seven days. While the move is described as an "expulsion," the U.S. isn't declaring them "persona non grata" -- a designation that would prevent them from ever returning, according to a State Department official.

Secretary of State Rex Tillerson said Tuesday the decision was made because Cuba failed to protect diplomats on its soil -- without directly blaming Cuba for the attacks on Americans in Havana.

"The decision was made due to Cuba's failure to take appropriate steps to protect our diplomats in accordance with its obligations under the Vienna Convention," Tillerson said in a statement.

The U.S. is also withdrawing 60 percent of U.S. diplomats from the embassy in Havana as a result of the unexplained attacks that have harmed at least 22 American government workers and their family members.

"Until the government of Cuba can ensure the safety of our diplomats in Cuba, our embassy will be reduced to emergency personnel to minimize the number of diplomats at risk of exposure to harm," Tillerson said. "We continue to maintain diplomatic relations with Cuba, and will continue to cooperate with Cuba as we pursue the investigation into these attacks."

The Cuban government called the move "hasty" and "irresponsible," according to the Associated Press.

"The Ministry of Foreign Affairs strongly protests and condemns this unfounded and unacceptable decision as well as the pretext to justify it," Rodriguez said.

At least 22 U.S. Embassy employees on the communist-run island have reported injuries from attacks "of an unknown nature," according to the State Department. Symptoms have included ear issues, hearing loss, dizziness, headache, fatigue, cognitive issues and difficulty sleeping.

The State Department said last week that investigators have been unable to determine who is responsible or what is causing these attacks.

On Friday, the Trump administration ordered the departure of non-emergency personnel assigned to the U.S. Embassy in Havana, as well as all family members. The U.S. also issued a travel warning advising American citizens to avoid travel to Cuba.

"We have no reports that private U.S. citizens have been affected, but the attacks are known to have occurred in U.S. diplomatic residences and hotels frequented by U.S. citizens," Tillerson said.

The Associated Press, citing unnamed U.S. officials, reported that American intelligence operatives in Cuba were among the first and most severely affected victims.

In some of these cases, U.S. operatives have suffered brain injury and hearing loss that has not healed, according to the AP. The American spies affected also reported hearing an unsettling sound inside and sometimes outside their Havana homes, described as similar to loud crickets. Then they fell ill with a range of physical symptoms.