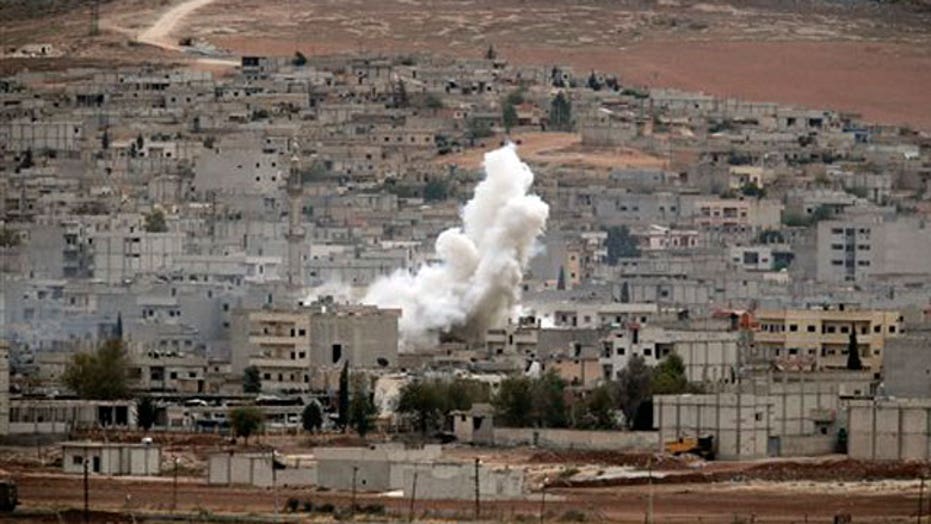 US airdrops weapons and supplies to Kurds in Kobani

The U.S. military said late Sunday that it had dropped weapons, ammunition, and medical supplies to Kurdish forces battling to hold the Syrian border town of Kobani against Islamic State militants.

The airdrops were the first of their kind and followed weeks of U.S. and coalition airstrikes in and near Kobani. Earlier Sunday, U.S. Central Command (CentCom) said that it had launched 11 airstrikes overnight in the area.

CentCom said U.S. C-130 cargo planes made multiple drops of arms and supplies provided by Kurdish authorities in Iraq. It said they were intended to enable continued resistance to Islamic State efforts to take full control of Kobani.

Fox News is told by Kurdish officials in the area that they have received the supplies, dropped in open land held by Kurdish fighters.

In a conference call with reporters after CentCom announced the airdrops, senior administration officials said three C-130 planes dropped 27 bundles of small arms, ammunition and medical supplies. The officials spoke on condition of anonymity under ground rules set by the White House.

One official said that while the results of the mission are still being assessed, it appeared that "the vast majority" of the supplies reached the intended Kurdish fighters.

The official also said the C-130s encountered no resistance from the ground in Syria during their flights in and out of Syrian airspace.

The airdrops are almost certain to anger the Turkish government, which has said it would oppose any U.S. arms transfers to the Kurdish rebels in Syria. Turkey views the main Kurdish group in Syria as an extension of the Turkish Kurd group known as the PKK, which has waged a 30-year insurgency in Turkey and is designated a terror group by the U.S. and by NATO.

President Obama called Turkish President Recep Tayyip Erdogan on Saturday to discuss the situation in Syria and notify him of the plan to make airdrops Sunday, one administration official told reporters. He would not describe Erdogan's reaction, but said U.S. officials are clear about Turkey's opposition to any moves that help Kurdish forces that Turkey views as an enemy.

One of the administration officials said the airdrops should be seen as a humanitarian move. He said U.S. officials believe that if Kobani were to fall, the Islamic State militants would massacre Kurds in the town.

In a written statement, CentCom said its forces have conducted more than 135 airstrikes against Islamic State forces in Kobani.

Using an acronym for the Islamic State group, Central Command said, "Combined with continued resistance to ISIL on the ground, indications are that these strikes have slowed ISIL advances into the city, killed hundreds of their fighters and destroyed or damaged scores of pieces of ISIL combat equipment and fighting positions."

The airdrops came amid reports of some of the fiercest fighting yet in the month-long battle for Kobani, with Reuters reporting that Islamic state fighters had attacked Kurdish fighters with mortars and car bombs. The Britain-based Syria Observatory for Human Rights claimed that 70 Islamic State fighters had been killed over two days, though those reports could not be immediately confirmed.