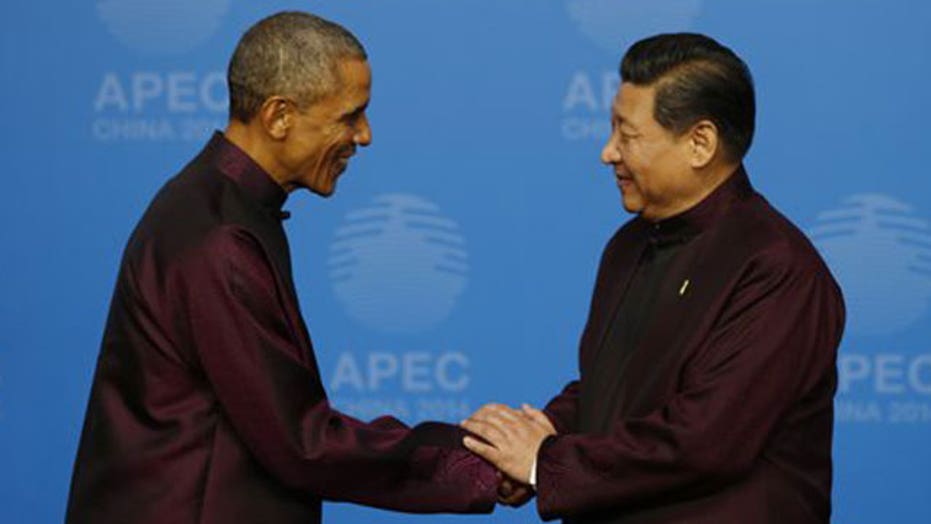 Obama arrives in China for start of three-country tour

BEIJING – Putting a bright face on the future of U.S. ties to China, President Barack Obama announced Monday that the two countries would start granting visas to each other's citizens valid for up to a decade. Yet thorny issues like human rights and trade lurked just under the surface, reflecting the tough road ahead for the two economic powers as Obama began a weeklong trip to the region.

Obama, addressing Asian business leaders at a high-level summit, sought to dispel the notion that America's interest in Asia should be a cause for concern for China's leaders. Beijing has viewed Obama's engagement here with trepidation, suspecting the U.S. wants to limit China's rise, but Obama insisted that "one country's prosperity doesn't have to come at the expense of the other."

"We want China to do well," Obama said. "We compete for business, but we also seek to cooperate on a broad range of challenges and shared opportunities."

The visa announcement came just after Obama's arrival in Beijing -- a down-payment on closer ties that allowed the president to portray the U.S. and China as partnering in good faith. Obama vowed that if the U.S. and China can work together, the entire world stands to benefit.

"America's a Pacific power, and we are leading to promote shared security and shared economic growth in this century just as we did in the last," Obama said.

Rosy predictions aside, there were abundant reminders on Obama's first day in China of the stark differences that have left the world's two largest economies eying each other warily from opposite sides of the Pacific Ocean.

At the U.S. Embassy, Obama hosted heads of state from the 11 other countries -- excluding China -- that are pursuing a long-delayed trade pact. Key obstacles to completing the deal remain, including Japan's objection to opening its markets to foreign competition, and U.S. officials said after the meeting that a final agreement was still a ways off.

"We're going to keep on working to get it done," Obama said, calling the pact "the model for trade in the 21st century."

White House officials have been more optimistic about the deal since last week's U.S. elections. Republicans, who tend to favor trade deals, won control of both chambers of Congress, making it more likely Obama can secure up-or-down approval for a final vote on the deal. That prospect was a rare silver lining for Obama in an election was disastrous for Obama's party and diminished his stature as he headed to Asia.

The Trans-Pacific Partnership has been a cornerstone of Obama's much-touted effort to expand U.S. influence in Asia, but yet another irritant in his relations which China, which isn't a party to the talks and has responded by pushing its own regional trade deal.

And in his remarks to Asian CEOs, Obama rattled off a litany of issues where the U.S. views China as not playing by the rules, including cyber-theft, currency manipulation, human rights and environmental standards. White House aides have said Obama plans to bring up such concerns during his meetings with President Xi Jinping, but the president appeared to be carefully calibrating his words to avoid letting those disputes interfere with the broader relationship.

Sitting down earlier with Australian Prime Minister Tony Abbott, Obama was guarded in his comments about pro-democracy protests that have seized Hong Kong, urging China's government to prevent violence there while calling the situation "historically complicated."

"We're not going to stop speaking out on behalf of the things that we care about," Obama said, adding that those interests must be balanced with America's significant business interests with China.

Under the visa agreement, business and short-term tourist visas will be valid for 10 years, while student and cultural exchange visas will last for five. Currently, such visas expire after just one year.

Yet the actual benefits may be modest. The visa arrangement doesn't increase how long an American can remain in China or vice-versa, but rather how long the visa can be used to enter the country. And the same restrictions remain on who is eligible for a U.S. visa, including an in-person interview requirement that is arduous for those who don't live near a U.S. consulate.

The White House said it hoped the deal would lure more Chinese travelers to the U.S. -- and with it, billions of dollars into the U.S. economy. U.S. officials said it could drive up demand that would create hundreds of thousands of jobs in the U.S., without sacrificing national security. About 100 million Chinese traveled last year, but less than 2 percent of those came to the U.S.

The U.S. plans to start issuing the new visas Wednesday. Officials said the agreement had been in the works for months ahead of Obama's visit.