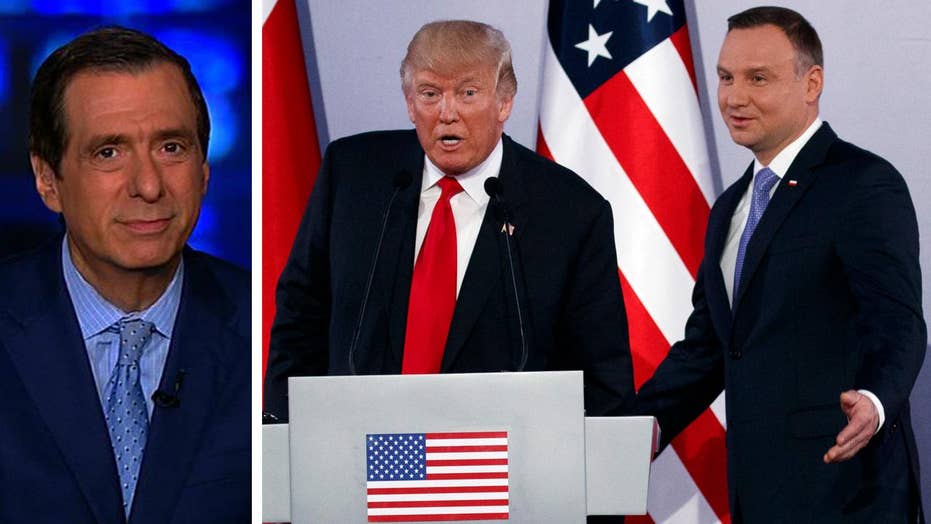 I was watching live yesterday as President Trump gave a lengthy speech in Poland that was full of historical sweep, a defense of NATO and a call to action against radical Islamic terrorism.

It was a well-crafted address, and even his detractors would have to admit that Trump sounded exactly like a president is supposed to sound. He praised the Poles for “the courage and will to defend our civilization,” at a site commemorating the 1944 Warsaw uprising against the Nazis, and urged a similar commitment today.

But the press is naturally talking about his swipes at CNN and NBC.

Asked at an earlier presser about his wrestling video—and CNN threatening to reveal the identity of the Reddit user who first posted it—Trump could have deflected the question. He chose not to.

“I think what CNN did was unfortunate for them,” Trump said. “As you know, now they have some pretty serious problems. They have been fake news for a long time. They’ve been covering me in a very, very dishonest way.”

He went on to say that CNN was taking the parody video “too seriously.”

With that answer, the president made sure that the media, which are rather self-absorbed, had something to focus on other than the speech. For a president who argues, with some justification, that the press doesn’t devote enough attention to his substantive agenda, he created just the sort of distraction that the media love to feast upon.

Trump also threw in NBC, in a way that shows the personal nature of his criticism.

“NBC is equally as bad,” he said, “despite the fact that I made them a fortune with ‘The Apprentice,’ but they forgot that.” Not that Trump’s success with the entertainment division at NBC (when the network was run by Jeff Zucker) would affect the news coverage today, right?

None of this was especially harsh by Trump standards. But to do it on foreign soil, standing next to a foreign leader who has attempted a crackdown on the press, was startling—and helped step on his own message.

CNN, though, sometimes slips into an oppositional role. White House correspondent Jim Acosta, who has been constantly feuding with Sean Spicer, said this:

“For the president to then go off on CNN as fake news, to me just made this entire spectacle seem like a fake news conference. This was not an attempt by the president to seek out a question from someone who was going to challenge him on the issues.”

So a news conference isn’t real if Acosta doesn’t approve of the questioners? Is Donald Trump the first president to call on a friendly journalist? Didn't Barack Obama take questions from sympathetic liberal reporters?

The question about CNN was asked by David Martosko, U.S. political editor of the Daily Mail, who said recently he had been in discussions about possibly becoming White House press secretary.

So he was hardly a hostile questioner.

(But Trump also called on NBC’s Hallie Jackson, who asked about Russian hacking, with the president responding that “I think it was Russia and I think it could have been other people and other countries.”)

Meanwhile, Jeff Zucker, now CNN’s president, told the New York Times in the wake of the wrestling video flap: “He’s trying to bully us, and we’re not going to let him intimidate us. You can’t lose your confidence and let that change the way you conduct yourselves.”

It’s now clear that Trump will continue to attack the media, no matter what country he’s in, no matter what other business he’s conducting at the time. His supporters love those attacks and his critics detest them, but they’re not going to fade any time soon.