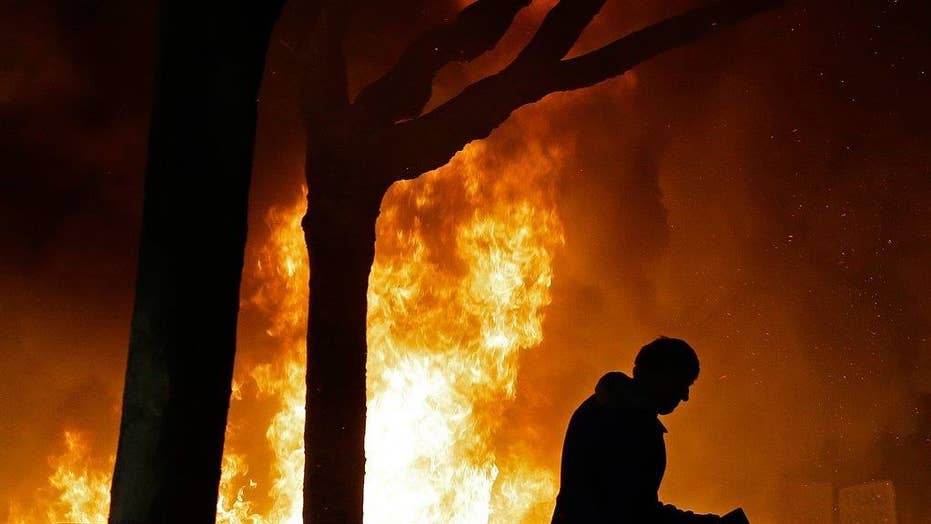 Is the Berkeley mayor tied to protests going on?

The University of California, Berkeley is likely to once again be the site of brutal protests on Thursday as questions arise about whether the city’s mayor has ties to an extremist group sparking violence.

Ann Coulter has vowed to move ahead with a planned appearance at the university, despite Berkeley trying to reschedule her speech over security concerns. Law enforcement sources told Fox News that regardless of whether the conservative firebrand shows up, there is a “99 percent” chance that the college will erupt in violence.

The sources are helping the Berkeley Police Department prepare for what is now seen as an inevitable showdown over First Amendment rights to free speech.

Charles “Sid” Heal, a retired commander from the Los Angeles Sheriff’s Department who met with Berkeley police on Monday, said that authorities are preparing for the worst because extremist groups from across the spectrum are heading to Berkeley, and because the past three protests that devolved into violence were met by a “lackluster” response from local police.

“We’ve been told they’re going to come no matter whether Ann Coulter comes or not, and the next riot is not a standalone in isolation but a natural consequence of the lackluster approach of the past,” Heal said, adding that because protesters felt police didn’t protect them at the last riot many are pledging to defend themselves. “People are becoming vigilantes.”

Heal and others said there is deep discord between the Berkeley Police Department and the city government, led by Jesse Arreguin, the 32-year-old newly elected mayor facing his first major test in running a large city. Arreguin has been accused of supporting left-wing violence because he is a member of the Facebook group of By Any Means Necessary, or BAMN, a far left group that has incited violent protests across the country.

Yvette Felarca, a BAMN national organizer, was unapologetic last June after her group shut down a Neo-Nazi protest in Sacramento that sent 10 people to the hospital.

"We will do it again,” she said. “The Nazis had to run and hide behind the police.”

In a statement to Fox News, Arreguin distanced himself from Felarca and BAMN.

"On social media, following a particular account does not mean you support that group or individual,” he said. “I was following this particular group so I could stay up to date on what they are up to. I condemn their violent actions in the strongest terms.”

But a source close to Berkeley city government accused Arreguin of bolstering leftist groups by quietly aligning himself with them.

“Mayor Arreguin is not representing all of Berkeley right now,” the source who wished to remain anonymous told Fox News, “he’s coming from a deep leftist position. We have some very radical elements on the police review commission. Jesse is emboldening them because he has a majority on the commission.”

SLOW LEARNERS UC BERKELEY LIBERALS GET SCHOOLED ON THE LAW

The mayor was criticized for basically handcuffing police officers who patrolled the April 15th tax day riot that resulted in 11 injuries, including a stabbing. Critics said he restricted police officers so much they could not do their job.

“If the police went in more aggressively, more people could’ve gotten hurt,” Arreguin was quoted as saying. “We have to balance how we respond with the goal of trying to keep as many [people] safe as possible.”

Arreguin said all protesters who commit violence will be arrested in Berkeley – no matter what side they are on the political spectrum.

“Unfortunately, extremists from both sides have come to Berkeley in recent weeks to engage in provocation,” he said.

But Heal would like to see a more proactive approach on Thursday, rather than a reactive one.

“There’s a disconnect from a realistic approach on how to deal with violent protests,” he said. “…The politicians need to understand they are representing the majority of the community, and their personal agendas may not meet the overall community.”

A city official told Fox News that she is receiving emails from concerned citizens fearing that police officers are not doing enough to protect them.

There have been at least three UC Berkeley free speech protests that have devolved into violence since February 1st – leading to 34 arrests, 39 injuries and property damage totaling at least $100,000.

There have been calls on Coulter to cancel her appearance to avoid further bloodshed.  But Arreguin and Heal say they support her for standing up for her First Amendment rights.

"I fundamentally disagree with everything someone like Ann Coulter stands for,” Arreguin said. “But in an open society, she has a right to speak and students and community members have a right to peacefully protest her.”

Besides, Heal said, protesters will still show up if she cancels her speech.

"It’s not going to make any difference if she cancels at this point,” Heal said. “The extremists are going to come here. It’s terrifying.”