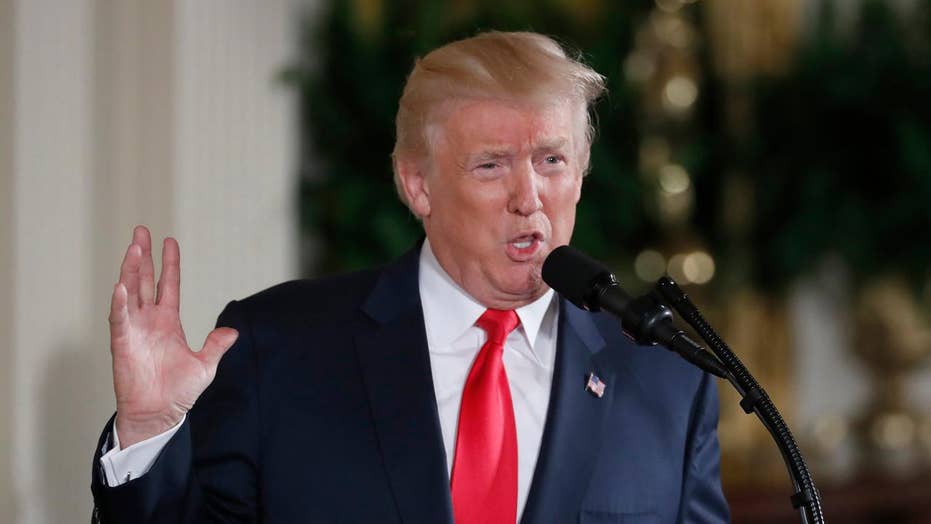 Has President Trump reached his limit with North Korea?

Missile-ready nuclear weapons are a game-changer in the nuclear crisis with the rogue state; reaction and analysis on 'The Fox News Specialists'

“Deterrence is really important,” Hoffman said on Fox News’ “Fox & Friends.” “It’s important for the United States to lay out very clearly how it would act in response to a North Korean attack.”

Kim's belligerence and continued testing of intercontinental ballistic missiles prompted the United Nations this past weekend to vote unanimously to impose sanctions on the rogue nation. But Kim responded to the global condemnation with more threats to the U.S.

"It’s important for the United States to lay out very clearly how it would act in response to a North Korean attack.”

Even after Trump said Tuesday that North Korea faces “fire and fury like the world has never seen,” Kim responded by threatening to create an “enveloping of fire” around the U.S. island of Guam, which has a large American military base.

Key Democrats were quick to find fault with Trump's warning.

“We need to be firm and deliberate with North Korea, but reckless rhetoric is not a strategy to keep America safe,” Senate Minority Leader Chuck Schumer, D-N.Y., said after Trump’s message late-Tuesday afternoon.

California Democratic Sen. Dianne Feinstein, a member of the Senate Intelligence committee, also criticized Trump’s words but acknowledged that isolating North Korea, through sanctions and other measures, has failed to stop the country’s nuclear pursuits.

“Isolating the North Koreans has not halted their pursuit of nuclear weapons,” Feinstein said in a statement. “And President Trump is not helping the situation with his bombastic comments.”

Sebastian Gorka, Trump's deputy adviser on national security affairs, said politicians should not publicly second guess the president on such a grave matter.

"Anybody, whether a member of Congress or a journalist, who thinks [their] politics trumps the national security of America, that's an indictment of you," Gorka said Wednesday on "Fox & Friends." "You need to ask yourself: what's more important? My political party or America. There's only one correct answer to that."

"It’s a funny thing when the American news media and other blue checkmarks on Twitter are more concerned with President Trump’s words than they are with North Korea obtaining nuclear ICBMs," he wrote. "But here we are."

Former CIA operative Mike Baker told “Fox & Friends” said diplomacy and sanctions are not enough, and a much stronger message must be sent.

“We’ve allowed this to get to here for years. …Now we have no options," Baker said. "Past (imposing) sanctions, we have to think about what are our military options short of war.”

Heritage Foundation fellow Bruce Klingner said Wednesday that the president’s statement was good but "the verbiage is concerning."

"The reaction of many was critical of the words, though not necessarily of the intent," he told Fox News. "Of course there’s always the political game of supporting or criticizing statements based on the political party that they came from."

"General Kelly and others on the NSC team were well aware of the tone of the statement of the president prior to delivery," Sanders said. "The words were his own. The tone and strength of the message were discussed beforehand."

Sanders added: "They [Gen. Kelly and the NSC team] were clear the president was going to respond to North Korea's threats following the sanctions with a strong message in no uncertain terms."