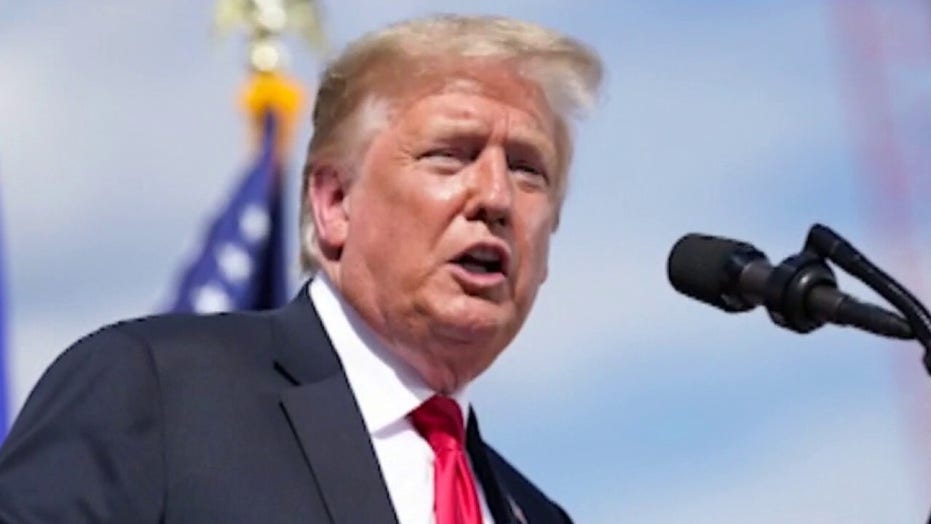 PORTSMOUTH, N.H. -- President Trump’s planned rally on Saturday in New Hampshire is being postponed to another day because of expected bad weather on the East Coast, officials said Friday.

“The rally scheduled for Saturday in Portsmouth, New Hampshire has been postponed for safety reasons because of Tropical Storm Fay. It will be rescheduled and a new date will be announced soon," said Tim Murtaugh, the Trump 2020 communications director

White House press secretary Kayleigh McEnany told reporters Friday it will be delayed by a week or two.

The president tweeted: "With Tropical Storm Fay heading towards the Great State of New Hampshire this weekend, we are forced to reschedule our Portsmouth, New Hampshire Rally at the Portsmouth International Airport at Pease. Stay safe, we will be there soon!"

TRUMP ACCUSES BIDEN OF ‘PLAGIARIZING’ HIM OVER 'BUY AMERICAN' PUSH

The rally -- the president's second since the coronavirus pandemic swept the nation in March -- was scheduled to be held outdoors on the tarmac at Portsmouth International Airport in the Seacoast region of New Hampshire, a key general election battleground state.

The first rally in Tulsa, Okla., was held indoors at an arena.

The Trump reelection campaign had said on Thursday that Air Force One – one of the most iconic symbols of the presidency and the power that comes with it – was going to be the backdrop for the president’s rally.

The planned taxiing of Air Force One up to rally site and the use of the plane as a backdrop may be a test run for future rallies as the president campaigns this summer and autumn for a second four-year term in the White House.

A long range view on Friday of the Trump campaign's site for Saturday night's rally with the president at Portsmouth International Airport in New Hampshire. The rally has been postponed due to severe weather concerns.

New Hampshire, which for a century has held the first primary in the race for the White House, has also for a generation been an important battleground state in general elections.

Four years ago Trump was edged out by less than 3,000 votes by Democratic nominee Hillary Clinton for the state's four electoral votes.

Ahead of the Oklahoma rally, the president and his campaign touted that they had received 1 million requests for tickets to the event. But the crowds never materialized, and large portions of the arena’s upper deck were empty as the president spoke.

Since announcing the New Hampshire rally at the beginning of the week, the Trump reelection team avoided making any crowd size forecasts.

But the president himself had no qualms making a prediction.

In the days after the Tulsa rally, the Trump campaign pushed back on suggestions that the president failed to draw a big enough crowd, noting that the event attracted over 4 million viewers “across all of the campaign’s digital media channels” and spotlighting that Fox News – which carried the event live – had its best Saturday night ratings in its history.

“One of the things that we obviously take away from Tulsa is that people can now look at these rallies and watch them through different platforms. And there will be many who want to come out and be a part of that energy,” he noted in a radio interview.

But with deep health concerns amid the coronavirus pandemic, he added, “If you happen to be someone who might be at high risk for a negative outcome with COVID or someone in our family is, we’d encourage you to stay home.”

Republican Gov. Chris Sununu of New Hampshire -- a supporter of the president who enjoys close ties with Vice President Mike Pence -- was planning on greeting Trump upon his arrival but said he wouldn't be attending the rally.

Sununu, who's running for re-election this year, told reporters on Tuesday that “I will not be in the crowd of thousands of people… As the governor, I try to be extra cautious for myself and the family.”