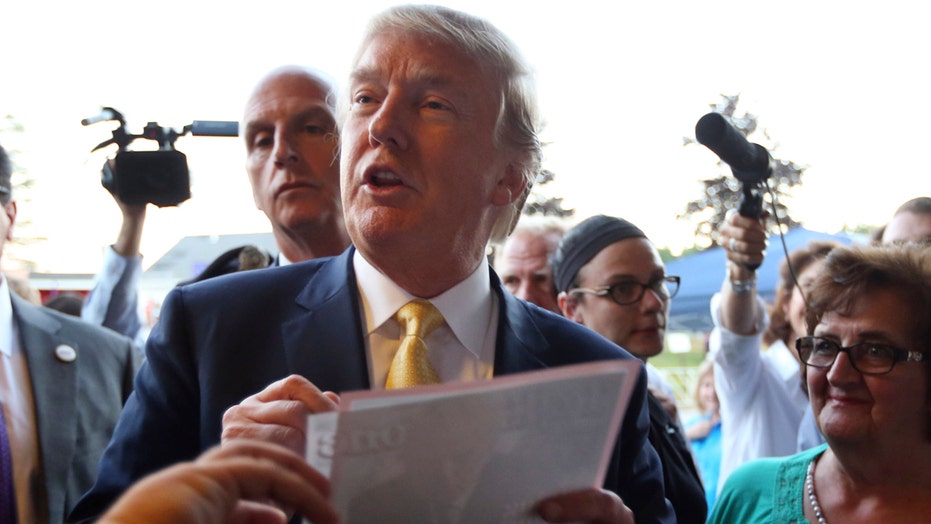 MANCHESTER, N.H. – Republican presidential candidate Donald Trump, who once advocated certain gun control measures, says he is a staunch supporter of the Second Amendment and that gun rights should not be infringed upon.

In his second policy announcement of his campaign, Trump argues against expanded background checks and says the government should not place any kind of limits on the types of firearms people can own.

"The Second Amendment to our Constitution is clear," he writes in the summary, released Friday on his website. "The right of the people to keep and bear arms shall not be infringed upon. Period."

The position paper is the second Trump has released so far and mirrors many of the National Rifle Association's talking points. There is little disagreement among the Republican field on the topic and appears aimed at firing up his conservative base.

In the paper, Trump, who has skyrocketed to the front of early GOP polls, offers several specific policy proclamations.

He says he wants members of the military stationed at bases and recruiting centers to be able to carry firearms and wants state-issued conceal carry permits, like the one he has, to be valid throughout the country.

He also argues against the expansion of the background check system, saying the current system must first be improved, and says he opposes all restrictions on magazine capacities and gun types.

"Law-abiding people should be allowed to own the firearm of their choice," he writes. "The government has no business dictating what types of firearms good, honest people are allowed to own."

The positions are at odds with the ones he expressed in his 2000 book, "The America We Deserve."

"I generally oppose gun control, but I support the ban on assault weapons and I also support a slightly longer waiting period to purchase a gun," he wrote then. "With today's Internet technology we should be able to tell within 72 hours if a potential gun owner has a record."

Trump has also shifted to the right in other policy areas, including abortion rights and health care.

More often, Trump sticks with vague talking points, like calling for better enforcement of laws already on the books, or describing problems without offering concrete solutions.

Under a section entitled, "Fix Our Broken Mental Health System," for instance, Trump declares, "Let's be clear about this. Our mental health system is broken. It needs to be fixed. Too many politicians have ignored this problem for too long."

But aside from calling for an expansion of treatment programs, Trump does not outline how he intends to do so.

"We need real solutions to address real problems. Not grandstanding or political agendas," he concludes.

The paper was released shortly after Trump cancelled a planned appearance at a candidate forum in South Carolina, citing a "significant business transaction" that needed his attention.