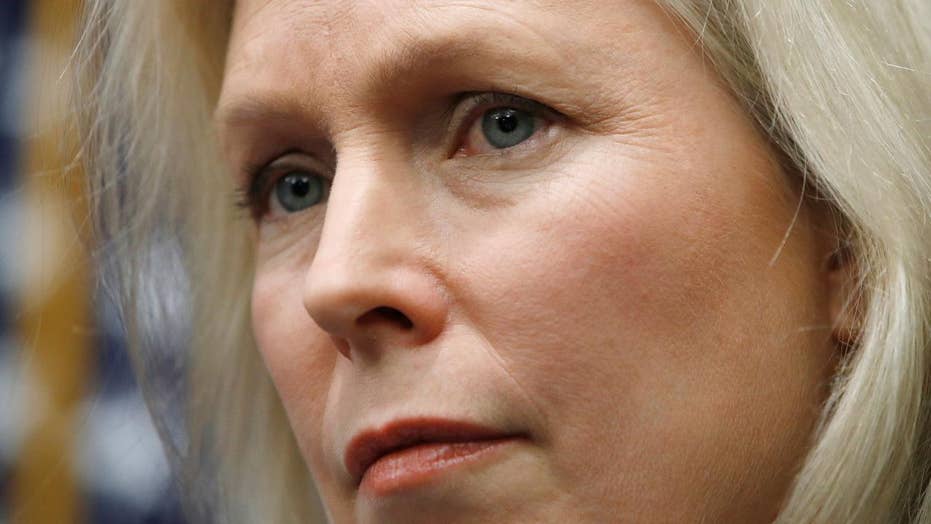 President Trump's suggestive tweet blasting Sen. Kirsten Gillibrand sets off media firestorm. But Gillibrand has aligned herself with scandal-plagued politicians when it suited her. #Tucker

President Trump sent shock waves through the mainstream media on Tuesday by attacking Sen. Kirsten Gillibrand with a cryptic tweet that was open to interpretation, although many people concluded Trump was making a sexual double entendre.

Trump tweeted, “Lightweight Senator Kirsten Gillibrand, a total flunky for Chuck Schumer and someone who would come to my office 'begging' for campaign contributions not so long ago (and would do anything for them), is now in the ring fighting against Trump. Very disloyal to Bill & Crooked-USED!”

Critics quickly assumed that Trump suggested Gillibrand traded sexual favors for campaign contributions because he put the word “begging” in quotes, but a quick search of the president’s Twitter history reveals that he has used similar language when attacking opponents who are men.

The New York Democrat had called for Trump’s resignation on Monday in connection with allegations of sexual misconduct -- claims the president called “false” and “fabricated.” Trump punched back, as he often does. While some analysts say he's proven to be an equal-opportunity attacker, that didn’t stop rival politicians, news organizations and other members of the media from assuming the worst in the current cultural landscape.

Sen. Elizabeth Warren, D-Mass., accused Trump of “trying to bully, intimidate and slut-shame,” while Gillibrand called it “a sexist smear.”

Journalist Kara Swisher accused him of committing sexual harassment “publicly” and CNN’s Jim Acosta has gotten into a public dispute with Press Secretary Sarah Sanders over the meaning of the tweet.

MSNBC’s “Morning Joe” co-host Mika Brzezinski, who has questioned if Trump is mentally fit for office in the past, said the tweet is “one of the worst things I’ve seen so far in this presidency.” “Morning Joe” aired in front of a live audience in Alabama on Tuesday and the crowd collectively gasped when Brzezinski read the tweet, emphasizing the “would do anything for them” part of the statement.

Slate’s headline read, “Trump Just Suggested Kirsten Gillibrand trades sex for campaign donations,” implying that it’s absolutely certain what the president was thinking when he pressed “send” on the tweet.

While Trump may or may not have had malicious intentions to imply Gillibrand used sex to her advantage, the same assumptions were not made when he used the same language about men.

Trump has put the word “begging” in quotation marks in the past. Back in 2013 he used it when tweeting about government leaker Edward Snowden in a situation that makes it questionable as to whether or not he simply thinks the word always gets quotes around it.

“The U.S. is now ‘begging’ Russia to give back Edward Snowden. In a letter they promised no death penalty for the traitor,” he wrote.

He has also used the phrase “do anything” when referring to male political opponents such as Texas Sen. Ted Cruz.

“Was there another loan that Ted Cruz FORGOT to file. Goldman Sachs owns him, he will do anything they demand,” Trump tweeted in early 2016. “Not much of a reformer!”

The same month, he used the phrase again, “Cruz lies are almost as bad as Jeb's,” referring to former Florida governor and fellow 2016 presidential contender Jeb Bush. “These politicians will do anything to stay at the trough!”

Another example occurred in June 2016 when Trump mocked the media, and he presumably wasn’t implying that media members would trade sexual favors to make him look bad.

“So I raised/gave $5,600,000 for the veterans and the media makes me look bad! They do anything to belittle - totally biased,” he tweeted.

White House Press Secretary Sarah Sanders was asked about the Gillibrand tweet during Tuesday’s press briefing and she defended her boss’ intentions.

“He's talking about way the system functions as it is - politicians beg for money, that's not something new” she said. “No way this is sexist at all.”

Sanders also said only people with their “mind in the gutter” would have interpreted the tweet as sexist.