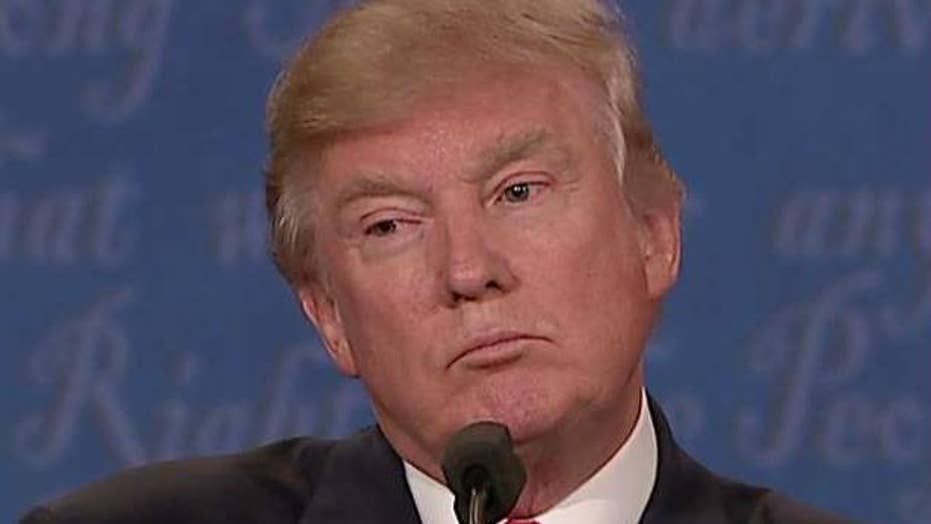 Trump on abiding by election: I'll look at it at the time

It’s unclear if Donald Trump has ever heard of Thucydides let alone read his 400 BC tome “The History of the Peloponnesian War.” But Thucydides certainly said something that would resonate with Trump should Hillary Clinton defeat the GOP nominee in November.

“Someone who fails to get elected to office can always console himself with the thought that there was something not quite fair about it,” proclaimed Thucydides.

“I will look at it at the time,” said Trump when asked by Fox News’ Chris Wallace if he could accept the election results. “I’ll keep you in suspense.”

“That’s horrifying,” countered Clinton. “He is denigrating – he’s talking down our democracy.”

Clinton countered Trump about his own bellyaching when he failed to capture an Emmy for “The Apprentice.”

“Should have gotten it,” Trump snapped.

You’d think the Palm Beach County Canvassing Board was involved in the perceived snub. Good thing Wallace didn’t ask Trump if the Dodgers’ Adrian Gonzalez was safe or out at home in last night’s playoff game.

Peaceful transfer of power on Jan. 20? Exercise in democracy? Transition of government? Those days are SO Bush v. Gore.

Will Trump respect the outcome of the election? The country’s future hangs in the balance … to say nothing of the chads. To Trump, election corruption is so rampant you’d need a big, red Ken Bone sweater to cover it up.

It’s hard to imagine how Trump could possibly make things more challenging for Republican House and Senate candidates prior to the final debate. But his remark undermining the electoral system did just that.

Republicans are fighting to maintain control of the Senate. Even the House may be in play. Trump’s “wait and see” approach automatically puts all GOPers on the defensive. Reporters will hound GOP candidates to determine if they support Trump’s suggestion. This contorts Republican candidates already waging nip-and-tuck campaigns to address conspiracy theories. That deprives those Republicans of precious opportunities to discuss bread and butter issues in the waning days of the campaign.

Does Trump’s stance present an opening for other candidates to argue the results are a sham? Will sitting members of Congress dispute the results? And if voters believe it is a sham, well, the whole shooting match is over…

This spells another headache for House Speaker Paul Ryan, R-Wis. Just days ago, Ryan spokeswoman AshLee Strong declared that the American system “relies on confidence in election results and the Speaker is fully confident the states will carry out this election with integrity.”

Voters may have their say on Nov. 8. But even when done by the book, this election is far from over. Trump has an opportunity to build “suspense” as he ponders the results.

Electors for the candidate who carried each state will huddle in early December to cast electoral votes. Results of that tally compose the Electoral College. Each secretary of state then certifies the results and ships multiple “Certificates of Vote” via registered mail to the U.S. Senate, the Archivist of the U.S. and the local federal court. In early January, the House and Senate convene a Joint Session of Congress to tabulate the Electoral College.

This is far from a fait accompli. All it takes is a sole House member and a sole senator to mutually contest a state’s electoral choice. The House and Senate then dissolve into their individual bodies to settle whether those electoral votes are valid.

Following the 2000 Florida election dispute, multiple members of the Congressional Black Caucus petitioned the Joint Session to challenge the Sunshine State’s electoral slate. But no senator joined the entreaty. Rep. Maxine Waters, D-Calif., protested that she didn’t “care” that no senator advocated a deeper review.

Vice President Al Gore – who ironically presided over the Joint Session in his role as president of the Senate – famously chastised the California Democrat.

“The chair would advise that the rules do care,” Gore lectured Waters.

This is why the integrity of all elections are crucial. The House and Senate are the ultimate arbiters of which candidate secures the presidency. Which party controls the House and Senate is already a coin flip. Imagine questions about the vote’s integrity if people don’t accept that one party holds the House or Senate by a handful of seats – exacerbated by Trump’s potential take on the outcome.

There are lots of opportunities for someone to create doubt at any of these stages, regardless of the Nov. 8 result. There’s a real problem if people don’t sign on.

These days, Trump orchestrates “suspense.” As Thucydides said, a candidate can “console himself with the thought there was something not quite fair” about an election. But what Thucydides didn’t say is that a candidate has the ability to stoke public opinion that the system is rigged.