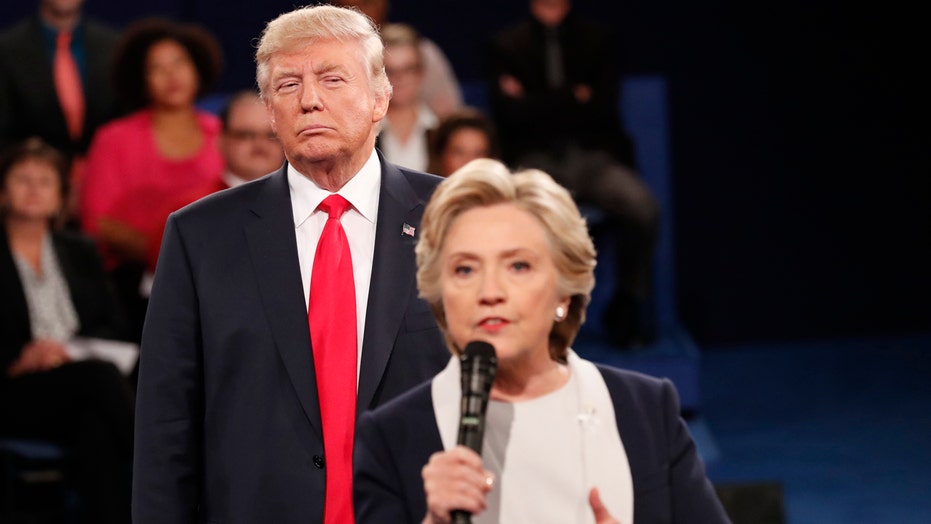 Was Donald Trump or Hillary Clinton able to alter views for better or for worse after the second presidential debate? Voters react to candidates’ debate performances, and Trump’s leaked audio. Rob Demetrious reports.

Donald Trump has a final chance in Wednesday night’s debate to change up his campaign playbook by making a persuasive appeal to undecided and swing voters before an audience of millions.

Whether the Republican nominee goes that route likely will become clear in a matter of minutes.

In the lead-up to the debate, Trump has opted to fire up loyalists with attacks on Hillary Clinton and even fellow Republicans who have crossed him. While Trump certainly will take advantage of their last prime-time face-off to play to his own base, he also is dealing with the political imperative to expand what polls indicate is a shrinking electoral map.

Some analysts, including Fox News contributor Michael Goodwin, suggest that appealing to swing and undecided voters Wednesday night might be the move he needs.

At the least, Trump is expected to continue to draw sharp contrasts between him and Clinton.

“Donald Trump is going to have to make the closing argument that if you’re ready for change, I’m your guy,” Republican National Committee chief strategist Sean Spicer told Fox News before the debate.

Spicer, like others, made clear that Trump will contrast his profile as a businessman and first-time candidate against that of Clinton, among the Washingtonians who “brag about how many offices they have held.”

To watch the Las Vegas debate, hosted by Fox News' Chris Wallace, tune in at 9 p.m. to Fox News Channel.

However, he trails significantly among such key voting blocs as Latino and female voters, a group Trump has found increasingly hard to reach since early October, when a 2005 audiotape surfaced revealing him bragging about making uninvited physical advances on women.

Meanwhile, other major polls show Trump trailing Clinton by double digits among Hispanic voters, with whom Republican candidates have struggled to connect for years, as they emerge as the country’s fastest-grown voting bloc.

Trump has apologized for his audiotape comments but has been forced in the aftermath to try to reassure and reconnect with his core supporters, which may have kept his slide in the polls from being any worse.

On social media and in battleground states across the country, Trump has railed against the liberal media for “rigging the election” by publishing or airing stories about the audiotape and about nine women who since the tape’s release have alleged Trump made unwanted sexual advances, which he denies.

“The press has created a rigged system and has poisoned the mind of so many of our voters,” Trump said at a rally Tuesday in Colorado.

In the debate Wednesday, Trump will almost certainly hammer on the stream of hacked Clinton campaign emails and other material recently released by WikiLeaks. The emails revealed infighting among Clinton associates, a cozy relationship with some in the press and internal uncertainty over some of Clinton's own policy positions.

Newly released FBI files also show a top State Department official tried to bargain with the bureau over classified Clinton emails during the agency’s investigation of her using a private server when secretary of state.

Democratic strategist Douglas Smith said Wednesday that Clinton’s debate strategy will be to talk to the audience, instead of reacting to Trump attacks.

“She needs to differentiate who she is, who she can be as president,” he said. “What she cannot do is make an unforced error.”

He also said Trump has no time left to slow the attacks and appeal to women, minorities and still-undecided voters. Roughly 13 percent of the electorate remains undecided or still supports third-party candidates.

“That ship has sailed so far away that we’ll never see it again,” said Smith, also a partner at Kent Strategies. “It will likely be hair on fire and fire up the base.”

Smith acknowledged not knowing exactly what Trump will try, amid reports that he’s invited Malik Obama, a supporter and President Obama’s half-brother, to the third and final debate.

In the second debate, Trump had as guests three women who have accused Clinton’s husband, former President Bill Clinton, of sexual assault and rape.

Trump, 70, has frequently questioned whether the 68-year-old Clinton is strong and healthy enough to be president, especially after she had pneumonia last month and needed help from assistants when hastily leaving a 9/11 memorial event.