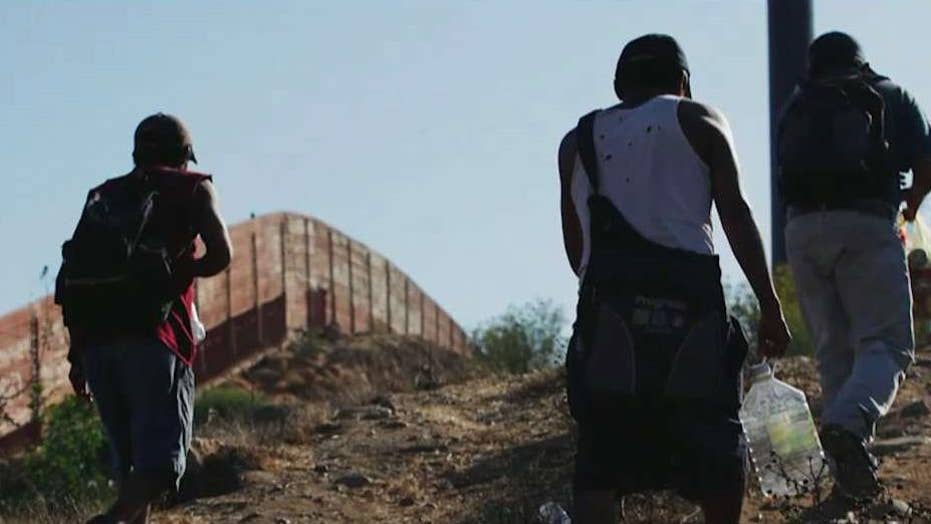 DHS secretary expects border wall to be built within 2 years

President Trump is setting an ambitious timetable for the construction of his promised “big, beautiful border wall.” But aside from potential funding and political complications, geologists and law enforcement officials are pointing to what could be a bigger challenge: the terrain.

Citing everything from bedrock depth to soil chemistry, experts say building a wall spanning the 2,000-mile border will be much tougher than erecting one of Trump's trademark skyscrapers.

The southern border between the U.S. and Mexico is made up of wetlands, grasslands, desert, rivers, mountains and forests – all of which could pose pitfalls for builders.

Swaths of the area also feature a thick layer of loose sediment – like dirt, sand and soil – on top. Some spots are packed with hydrophilic clay soil, which swells, moves and could destroy the foundation.

“In some places the bedrock will be too deep – you’ll never be able to reach the bedrock in an affordable fashion,” McKinnon told Smithsonian Magazine.

McKinnon says in order to make sure the wall itself doesn’t topple, builders need to survey the land first.

Trump in his executive order called for a study to be completed within 180 days that looks at, among other things, "all geophysical and topographical aspects of the southern border."

Such planning could entail assembling a team of scientists to test everything from clay particles to loose silt. The Trump administration continues to express confidence it can get the job done -- and quickly.

The timeline Kelly gave Fox News is different than one laid out in a U.S. Department of Homeland Security internal report obtained by Reuters last week. In it, Trump’s “wall” actually would be a series of fences and walls potentially costing taxpayers twice what the president quoted on the campaign trail. The report put the figure at $21.6 billion – higher than the $12 billion Trump regularly cites. Trump later tweeted that once he gets involved in negotiations, "price will come WAY DOWN!"

The report also said the wall would take longer to build.

It lays out three phases of construction covering more than 1,250 miles by the end of 2020. With 654 miles of the border with Mexico already fortified, the barrier would extend almost the length of the entire border.

The president’s vow to build a wall – and make Mexico pay for it – was a concept first introduced on the campaign trail. It gained momentum and support from like-minded immigration hawks, but drew denunciations from Democrats, immigrant activists and environmentalists.

In the Texas border city of Brownsville, Democratic Mayor Tony Martinez questioned the wall’s feasibility and purpose. He also believes the time frame the Trump administration is touting is “nearly impossible.”

Martinez accused the Trump administration of offering a quick fix in a difficult location that most Americans – and Washington lawmakers – know little about.

Allowances will need to be made in certain areas for flooding because the border crosses numerous floodplains. In New Mexico, engineers will have to carefully carve out areas near Big Bend National Park to keep in compliance with environmental regulations.

In some parts of California, they would have to build on sand dunes -- something that, while tricky, is doable.

To safely erect a wall in sand, geophysicists would have to conduct extensive seismic surveys to determine what lies beneath. Conducting such a survey would involve installing rows of 3D microphones that detect vibrations in the ground.

U.S. Rep. Will Hurd, R-Texas, whose district includes more than 800 miles of border, said it would be “impossible” to build a wall in many places and calls the wall “the most expensive and least effective way to secure the border.”

“Each sector of the border faces unique geographical, cultural and technological challenges that would be best addressed with a flexible, sector-by-sector approach,” Hurd said in a written statement. “What you need in San Diego is very different from what you need in Eagle Pass, Texas.”

Anfinsen told Fox News that while some sectors can support a wall, his in Del Rio, Texas, is “too hilly to feasibly make a wall on its entire stretch of border.”

Anfinsen said most border agents are in favor of some sort of wall or fence but stresses “a wall alone won’t make the country safer.”

He suggested combining a fence, wall or barrier with new technology and adding manpower to patrol the patchy parts of the border.

The original border barrier was authorized under the Secure Fence Act of 2006 which was signed by former President George W. Bush. The legislation OK’d hundreds of miles of fencing along the Mexican border. Over the years, it’s been tweaked and in some areas hastily redrawn, cheating homeowners and businesses out of their own land.

When the border wall was first authorized, then-Texas Sen. Kay Bailey Hutchison pushed a measure that would give the Department of Homeland Security the authority to decide what type of fence should go up in different areas – the reason why there are so many different types of border barriers in place today.