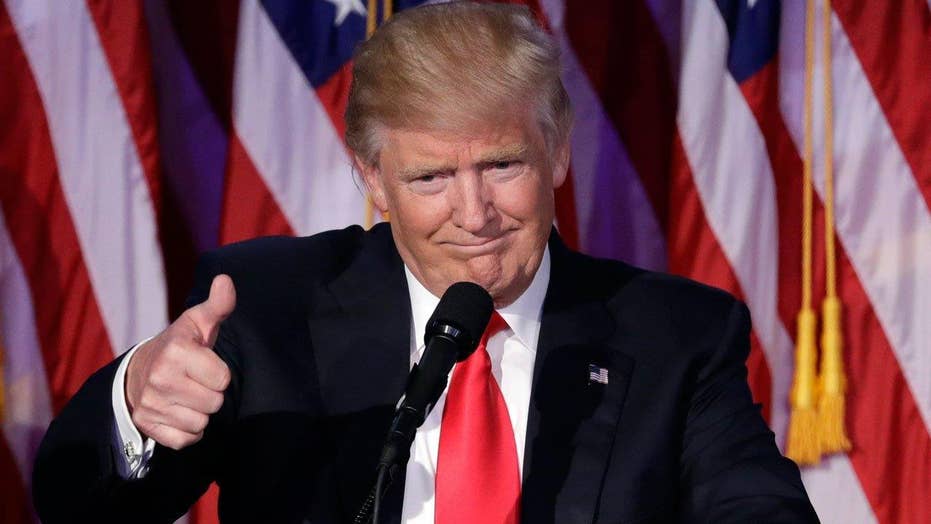 Donald Trump: I will be president for all Americans

President-elect speaks to the nation from New York City

Latinos turned out in high numbers, early exit polls showed, in a development expected to give Hillary Clinton an important edge in various battleground states in the presidential election.

But real estate mogul Donald Trump, who alienated the fast-growing electorate more than any other presidential nominee, clinched the presidency nonetheless.

The GOP tough-talking candidate won in states like Florida, where an energized Latino electorate was expected to boost Clinton’s odds of winning.

Analysts theorized that white voters who formed a major part of Trump’s base also turned out in significant numbers, negating the impact of Latinos and handing the billionaire, who has never served in public office, a remarkable victory.

“It is a crushing disappointment for Latinos,” Frank Argote-Freyre, a professor at Kean University in New Jersey, told Fox News Latino. “The analysis seems clear that the large Latino vote was offset by larger than expected votes among white voters for Trump.”

Exit polling conducted by Fox News Channel found that, nationwide, 70 percent of the electorate who voted on Tuesday was white – with 55 percent of them casting their ballots for Trump – while only 12 percent were African-American and 11 percent were Latino.

Latino turnout was up slightly on Tuesday over that of the 2012 presidential election, while the white and black turnout was slightly lower.

Latino early voters in Florida went overwhelmingly for Clinton, but Trump won the state by a narrow margin. Some 19 percent of Florida voters on Tuesday were Latino, 62 percent were white.

Whites went overwhelmingly went for Trump over Clinton, 64 to 33 percent.

Trump had an edge over Clinton among Cuban-Americans in Florida, however, with 52 percent saying they supported him – a jump from 33 percent who said so in September, according to the New York Times. Several times, Trump had cited Cuban-Americans as evidence that he enjoyed the support of some Latino groups.

“The people of Florida have spoken, and they have chosen a new way forward and rejected the status quo,” said Republican Party of Florida Chairman Blaise Ingoglia in a statement.

“They have said no to big government and corruption, and yes to restoring America's greatness at home and abroad,” Ingoglia said. “We congratulate Donald Trump on a Florida victory, and we congratulate the people of our great state for choosing prosperity over institutional corruption. Floridians understood what was at stake in this historic election, and it is because of their votes that we made Florida red again!”

Latinos did respond to the sweeping nationwide effort by numerous groups to get them to vote. Of the 27 million eligible Hispanic voters, 16 million are registered, and 13 million were expected to cast ballots.

The mobilization of Latinos in the 2016 presidential election comes four years after the Republican Party saw the alienation of the electorate over hardline immigration rhetoric during the primaries as a factor in GOP nominee Mitt Romney’s loss to President Barack Obama.

After Romney received only 27 percent of the Latino vote, compared with 71 percent for Obama, the GOP conducted a so-called autopsy that concluded it had to make dramatic efforts to connect with Latinos and other minorities if it was going to succeed in national elections.

But from the outset when he announced his candidacy last year, Trump took a hardline on immigration, vowing to push for tough enforcement and accusing Mexico of dumping rapists and drug dealers on the United States.

Republicans, nonetheless, urged Latinos not to discount their party, which, they argued, more clearly reflects the work and family values of the community.

After announcing her candidacy, Clinton sought to distinguish her approach to immigration from the restrictive one of Trump by saying that she would not deport undocumented immigrants who had not committed crimes, and that she would go beyond Obama in giving a relief from deportation to those here illegally who had been brought as minors.

In an interview with Fox News Latino before the polls closed, a Republican National Committee official conceded that Trump could have addressed Latinos and their concerns with more sensitivity.

Helen Aguirre Ferré, director of Hispanic communications for the Republican National Committee, said the Trump campaign’s lack of outreach to Latinos and the nominee’s tough talk about immigration and other topics important to the electorate likely hurt his relationship with Hispanics.

But, that tough talk obviously endeared him to other groups.

“There’s no question that Donald Trump speaks in a way that some people would say that’s part of what has attracted them to him,” she said. “He speaks very frankly, sometimes in harsh terms. He says what many people are thinking but aren’t saying.”