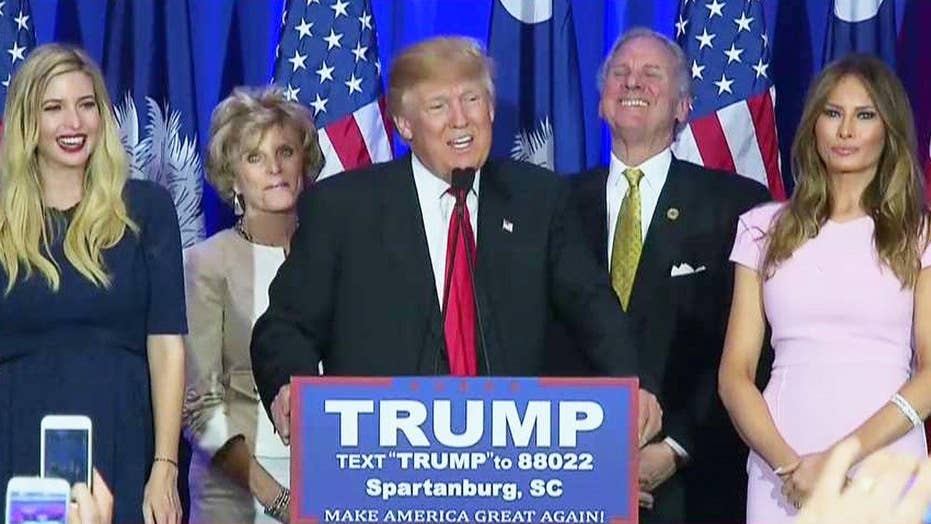 Trump: We are going to start winning for the country

Donald Trump charges into Nevada and the mega-March primaries with a commanding lead over the GOP field after sweeping to victory Saturday in the South Carolina primary – while Hillary Clinton can breathe a sigh of relief that her firewall held just enough to beat back Bernie Sanders in Nevada, as they head to Palmetto State territory.

The outcome of Saturday’s contests helps both 2016 “front-runners” regain their footing after going one-for-two in the leadoff contests. But there are potential hurdles ahead.

The big question now looming over the GOP race is: With Jeb Bush suspending his campaign on the heels of a distant finish Saturday, where will his supporters go?

At his victory rally, Trump challenged pundits who say such votes will gravitate to his rivals. The billionaire businessman sounded a booming note of confidence as he previewed the race ahead.

Reflecting on the rough-and-tumble primary, which gave him a 10-point margin of victory, Trump also said, “When you win, it’s beautiful. “

Clinton heads into the next round in a more fragile – albeit improved – position.

Clinton has watched her lead in national polls essentially evaporate after losing big in New Hampshire. Her showing in Nevada marks a crucial victory, and she enjoys a significant advantage heading into next weekend’s South Carolina primary.

“I am so, so thrilled and so grateful to all of my supporters,” Clinton said at her Las Vegas victory rally.

But her 5-point margin of victory may not be enough, at this stage, to significantly blunt Sanders’ momentum. The Vermont senator maintained he has an “excellent chance” to score some big wins in the upcoming Super Tuesday contests.

The Palmetto State, meanwhile, delivered a huge victory Saturday night on the Republican side to Trump -- while Marco Rubio and Ted Cruz were locked in a tight race for second.

Cruz nevertheless gave a fiery speech to supporters, as the senator touted his campaign’s ability to defy “expectations” and maintained that he’s the best candidate to go up against Clinton or Sanders “or whatever other socialist they nominate” on the Democratic side.

“Indeed, the screaming you hear now from across the Potomac is the Washington cartel in full terror that the conservative grassroots are rising up,” Cruz said, while suggesting he’s the only candidate who can beat Trump.

Rubio, for his part, declared: “After tonight, this has become a three-person race, and we will win the nomination.”

Rubio was in need of a recovery after stumbling in New Hampshire following a rough debate performance earlier this month. He had vowed to bounce back, and was buoyed in South Carolina by support from the state's popular governor, Nikki Haley, and other state leaders.

With Bush now out of the race, Ohio Gov. John Kasich is the only governor left standing on the GOP side. It remains unclear where his supporters will go. The only other candidate left is retired neurosurgeon Ben Carson, who vowed to press on.

The GOP race heads next to Nevada and after that to Super Tuesday, representing a delegate gold mine. Even South Carolina, with 50 delegates, is the most valuable GOP primary to date. As the winner, Trump would get the lion's share.

South Carolina, historically, also is a prized contest for Republican candidates as it has a knack for picking the eventual nominee – the primary winner has gone on to claim the nomination in every race since 1980, except for 2012 when Newt Gingrich won.

The race tightened in the final days, but not enough to shake Trump's long-time advantage there. Fox News exit polls indicate significant numbers of late-deciding voters ended up supporting Cruz and Rubio, causing both candidates to perform more strongly than pre-election polling suggested.

Clinton’s Nevada win comes just a week-and-a-half after she lost to Sanders by double-digits in New Hampshire.

"To everyone who turned out in every corner of Nevada with determination and heart: This is your win. Thank you," Clinton tweeted after the race was called.