President Trump on Saturday made his first public appearance at the White House since returning from Walter Reed National Military Medical Center earlier this week -- paying tribute to law enforcement and warning of socialism if Democrats win in November.

“We support you, we honor you, it’s a dangerous profession,” he said of law enforcement in what the administration described as a “peaceful protest for law and order. “They’ve been doing an incredible job and I just want to thank them on behalf of everyone here today because that’s why we’re safe.

Trump tested positive Oct. 1 and was transported to Walter Reed National Military Medical Center with serious symptoms the next day. He returned to the White House Monday, and has since made a number of virtual appearances on TV and radio, and in videos.

President Donald Trump removes his face mask to speak from the Blue Room Balcony of the White House to a crowd of supporters, Oct. 10, in Washington. (AP Photo/Alex Brandon)

Trump spoke to hundreds of supporters from the White House balcony, during a speech in which he encouraged the crowd them to vote, while hitting Democrats on what he called a calamitous approach to crime and poverty.

He warned of disaster, both in cities and on issues such as fracking, energy and school choice, if Democrats win the White House in November.

“We cannot allow our country to become a socialist nation, we cannot let that happen, and that's what would happen...or worse,” he said.

The event is likely to be scrutinized over whether it adheres to Centers for Disease Control and Prevention guidelines. It was near the location of the Sept. 26 celebration for Trump's nomination of Amy Coney Barrett for the Supreme Court - now considered a “superspreader” event after a number of attendees tested postive.

Attendees for the balcony speech were required to bring masks to the event, or were given one. They also had to fill out a health questionnaire and have their temperatures checked. They were encouraged to follow CDC guidelines, including wearing masks and keeping social distance. 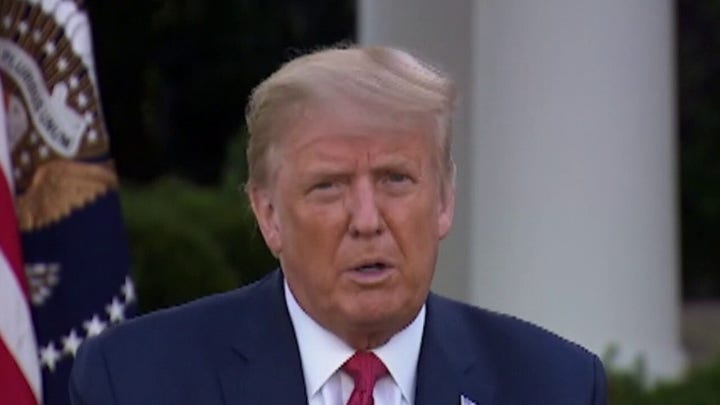 In Washington, restrictions prohibit gatherings of more than 50 people and masks are mandatory -- but such rules do not apply on federal land.

Trump thanked the crowd for its support during his hospitalization and made reference to the controversail drive-by visit he made to those gathered near Walter Reed.

“In that hospital I was watching down over so many people, and I went out to say hello to those people and I took a little heat for it, but I’d do it again, let me tell you”

The event is in line with one of Trump’s central messages to voters: He is a law and order candidate who will protect police and restore order where there have been riots and a rise in violent crime.

He has attempted to paint Democratic opponent Joe Biden as beholden to calls to defund police coming from the far left of the party -- a claim denied by Biden, who has instead accused Trump of pulling resources away from police.

Saturday’s event marks the beginning of a return to public events for Trump, with Election Day just over three weeks away. Trump plans to follow the White House event with a Monday rally in Florida, originally scheduled for last week.

However, not everything is back on schedule. A debate next week between Trump and Biden was canceled after the Commission on Presidential Debates said it would shift to a virtual format -- a proposal Trump described as a “waste of time.”

Both candidates have agreed to participate at an Oct. 22 in-person debate at Belmont University in Nashville, Tenn., the commission said.