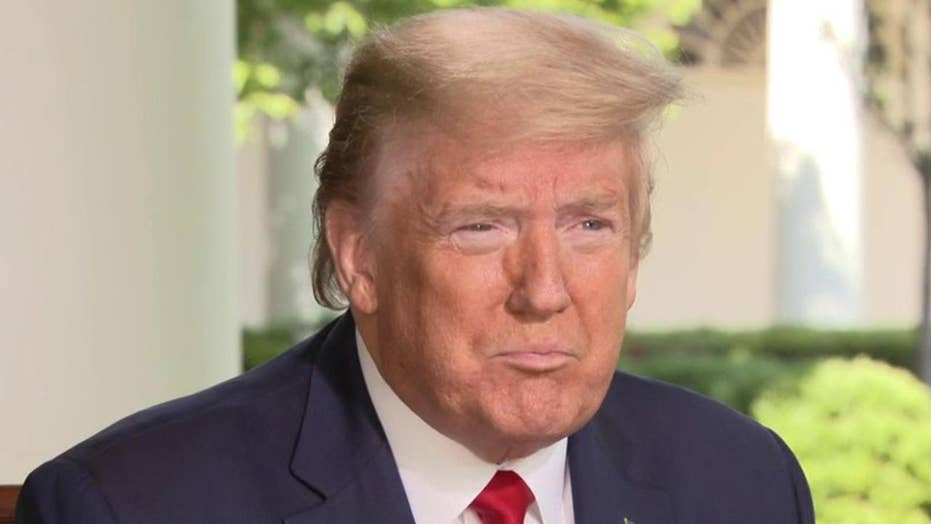 Trump on reopening of America from coronavirus: We will transition to greatness 'fast'

President Trump on reopening America, disagreements with Dr. Fauci, and bringing the economy back from the coronavirus pandemic.

President Trump weighed in Thursday in an interview with Fox Business Network on the former Obama officials – including former Vice President Joe Biden and former FBI Director James Comey – who requested to "unmask" former national security adviser Michael Flynn during the transition period between the Trump and Obama administrations.

A list of the then-President Obama officials who made these requests – while an investigation into Russian interference in the 2016 presidential election and alleged Trump campaign collusion in such efforts was ongoing – was made public Wednesday by Sens. Chuck Grassley, R-Iowa, and Ron Johnson, R-Wis., after it was declassified by acting Director of National Intelligence Richard Grenell.

"It was the greatest political crime in the history of our country," Trump said in an interview with Fox Business' Maria Bartiromo that aired Thursday morning. "If I were a Democrat instead of a Republican, I think everybody would have been in jail a long time ago, and I'm talking with 50-year sentences. It is a disgrace what's happened. This is the greatest political scam, hoax in the history of our country."

Trump sits down with Fox Business' Maria Bartiromo for an interview that aired Thursday morning.

Trump continued: "People should be going to jail for this stuff and hopefully, a lot of people are going to have to pay. No other president should have to go through, and I'll tell you, Gen. Flynn and others are heroes, heroes, because what's happened to them. They weren't after Gen. Flynn. They wanted him to lie about me. Make up a story."

Flynn's case returned to the national spotlight after the Department of Justice moved to dismiss charges against him of lying to the FBI about conversations with then-Russian Ambassador Sergey Kislyak, despite a guilty plea that Flynn later sought to withdraw. Trump allies claim Flynn was wrongly targeted, and have suggested high-level involvement in an effort to bring him down. Democrats, however, claim the DOJ's decision to abandon the case shows how it has become politicized.

Attorney General Bill Barr has stood behind the decision, and defended it in an interview with CBS.

Both the DOJ and Grenell had been discussing these "unmasking" files after Grenell appeared to have delivered those files to the department last week. There were some tensions between the two offices over who would actually pull the trigger to release them — ultimately, the publication came from Capitol Hill after Grenell sent lawmakers the files.

The declassified list specifically showed officials who “may have received Lt. Gen Flynn’s identity in response to a request processed between 8 November 2016 and 31 January 2017 to unmask an identity that had been generically referred to in an NSA foreign intelligence report,” the document, obtained by Fox News, read.

The Trump campaign slammed Biden over the fact his name appeared on the list of officials who requested Flynn's unmasking.

“Joe Biden’s limp claim that he doesn’t know anything about the railroading of Gen. Michael Flynn just got even more unbelievable. Biden is listed among the Obama administration officials who requested the unmasking of Flynn," campaign manager Brad Parscale said in a statement. "We already knew Biden was briefed on the Flynn case before President Trump took office and now we know that he wanted Flynn unmasked."

The Biden campaign, however, accused the Trump campaign of lying and defended the conduct of the former vice president.

"These documents have absolutely nothing to do with any FBI investigation and they confirm that all normal procedures were followed — any suggestion otherwise is a flat out lie,” Biden Rapid Response Director Andrew Bates said. “What's more, it's telling that these documents were selectively leaked by Republicans abusing their congressional powers to act as arms of the Trump campaign after having them provided by a partisan official installed for this very purpose."

Flynn's name was picked up in calls with Kislyak during the presidential transition. Flynn urged the Russian ambassador to not respond to sanctions imposed by the Obama administration over Russian election interference.