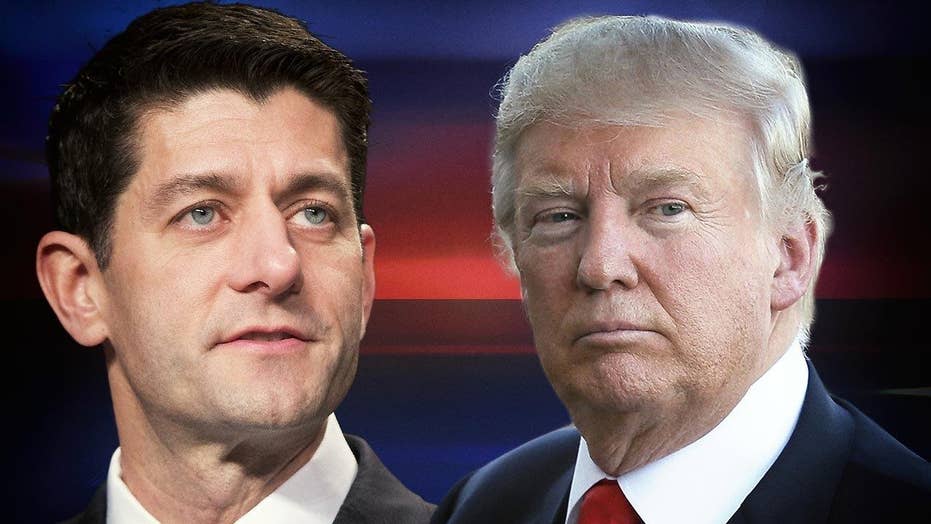 Has Donald Trump declared “war” on the GOP?

That phrase, trumpeted in a Politico headline, might be a tad overstated. But the verbal battle taking place between the Republican presidential nominee and the speaker of the House is something we haven’t seen in modern American history—and is threatening to define the campaign’s final weeks.

I’ve never thought that Ryan’s support was crucial for Trump. He won the nomination without the backing of the Wisconsin congressman, Mitch McConnell and other establishment stalwarts. The very essence of Trump’s candidacy is taking on the system.

But the sniping going on right now is a big-time distraction, not least because the media love civil wars, especially Republican civil wars. And it certainly isn’t helping Trump to expand the base and close the gap with Hillary Clinton.

For a brief moment, it looked as though Trump had turned a corner. He was battered by waves of negative media coverage over that 11-year-old “Access Hollywood” tape in which he described trying to seduce a married woman and said celebrities like him were able to grab women by the crotch.

Trump apologized, first on video and then in Sunday’s debate in St. Louis. He went on to a much stronger debate performance than at Hofstra, and some pundits declared him the winner. (A Politico/Morning Consult poll, though, said Clinton won the debate, 42 to 28 percent.)

But just as Trump was drawing some decent Monday morning write-ups, Ryan told a GOP conference call that he would spend the next month concentrating on preserving the party’s House majority—withdrawing his support for Trump without explicitly yanking his endorsement. For Ryan, the vulgar talk about women—also criticized by Trump’s top surrogates, his running mate and even his wife—was one step too far.

Trump did what he usually does: counterattacked.

“Despite winning the second debate in a landslide (every poll), it is hard to do well when Paul Ryan and others give zero support!” Trump tweeted yesterday. Then he wrote that “our very weak and ineffective leader, Paul Ryan, had a bad conference call where his members went wild at his disloyalty.”

He was just warming up. The billionaire soon broadened his indictment to the entire party.

“With the exception of cheating Bernie out of the nom the Dems have always proven to be far more loyal to each other than the Republicans!” And: “Disloyal R's are far more difficult than Crooked Hillary. They come at you from all sides. They don’t know how to win - I will teach them!”

The upside, according to The Donald: “It is so nice that the shackles have been taken off me and I can now fight for America the way I want to.”

And he told Bill O'Reilly last night: "I think I'm better off, maybe, without their support."

So there you have it, the unshackled, unvarnished Trump. And that kind of talk revs up his base, which has little use for the Paul Ryan brand of bipartisan governing.

But Trump has to appeal to suburban women, among others. He has to win Florida and Ohio and Iowa and New Hampshire and maybe even Pennsylvania to get to 270. The risk here is the Republican feuding takes him off his core message of tax cuts, immigration, terrorism and even child care, sending the message of a party in disarray.

Win or lose, Trump has decided to go down fighting—as himself.