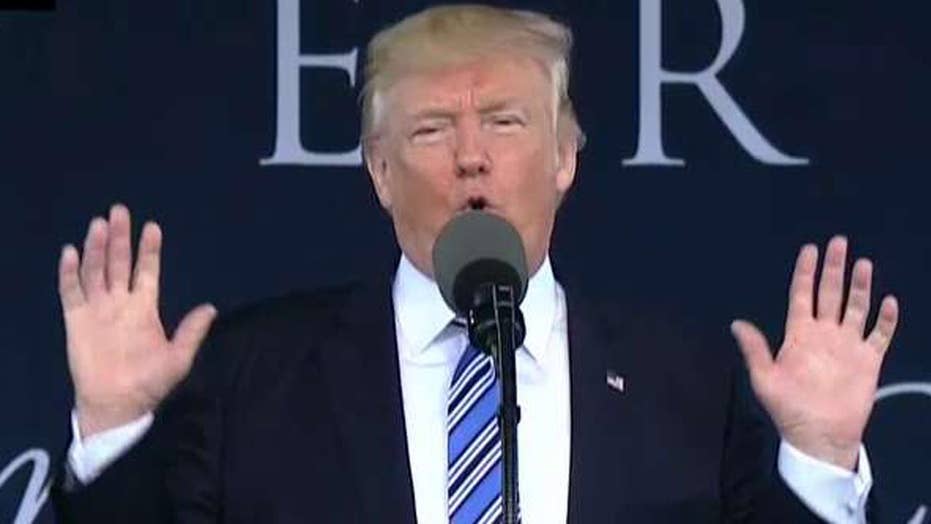 President Trump on Saturday urged graduates of Liberty University to “never give up” and find the courage to challenge the establishment and critics, much like he has done in Washington.

"In my short time in Washington, I've seen firsthand how the system is broken," he said. "A small group of failed voices, who think they know everything … want to tell everybody else how to live,” Trump said in his commencement speech at the Christian school, in Lynchburg, Va.

“But you aren't going to let other people tell you what to believe, especially when you know that you're right. … We don't need a lecture from Washington on how to lead our lives."

Trump, a businessman and first-time elected official, made three previous visits to Liberty but none likely as important as his January 2016 trip in which he asked and received the support of evangelical Christians.

"Nothing worth doing ever, ever, ever came easy," Trump said Saturday, in his first college commencement speech as president. "Following your convictions means you must be willing to face criticism from those who lack the same courage to do what is right. And they know what is right, but they don't have the courage or the guts or the stamina to take it and to do it."

Former Presidents Barack Obama, Jimmy Carter, Ronald Reagan and George W. Bush did so during their first year in office. But this year, Vice President Mike Pence will speak at Notre Dame's graduation, becoming the first vice president to do so.

Notre Dame spokesman Paul Browne declined to say whether Trump had been invited to the May 21 ceremony, saying it was against school policy to reveal who had turned down offers.

Trump's remarks in Virginia marked his first extended public appearance since he fired James Comey as FBI director on Tuesday.

The president on Saturday didn't talk about Comey. And he has largely stayed out of public view since Tuesday, when he removed the head of the agency investigating Russia's role in the 2016 election, along with possible ties between Trump's campaign and the Russian government.

Aboard Air Force One, en route to Liberty, Trump said he could appoint a new FBI director by Friday, before departing on his first overseas presidential trip.

Several candidates were interview Saturday at Justice Department headquarters in Washington, D.C. Whoever is appointed would have to be confirmed by the Republican-led Senate.

A recent Pew Research Center survey marking Trump's first 100 days in office, a milestone reached on April 29, found three-quarters of white evangelicals approved of his performance as president while just 39 percent of the general public held the same view.

“I’m thrilled to be back at Liberty University,” said Trump, who repeatedly thanked the stadium-filled crowd for helping him get elected. “Boy did you come out and vote.”

Christian conservatives have been overjoyed by Trump's appointment of Justice Neil Gorsuch to the Supreme Court, along with Trump's choice of socially conservative Cabinet members and other officials, such as Charmaine Yoest, a prominent anti-abortion activist named to the Department of Health and Human Services.

But they had a mixed response to an executive order on religious liberty that Trump signed last week. He directed the IRS to ease up on enforcing an already rarely enforced limit on partisan political activity by churches.

He also promised "regulatory relief" for those who object on religious grounds to the birth control coverage requirement in the Affordable Care Act health law. Yet the order did not address one of the most pressing demands from religious conservatives: broad exemptions from recognizing same-sex marriage.

"I really don't think any other president has done more for evangelicals and the faith community in four months than President Trump has," Falwell said.

Falwell became a key surrogate and validator for the thrice-married Trump during the campaign, frequently traveling with Trump on the candidate's plane and appearing at events. Falwell often compared Trump to his later father, the conservative televangelist Jerry Falwell, and argued that while Trump wasn't the most religious candidate in the race, he was the man the country needed.

"The more that a broken system tells you that you're wrong, the more certain you must be that you must keep pushing ahead," added Trump, who often complains about being underestimated during the presidential campaign.