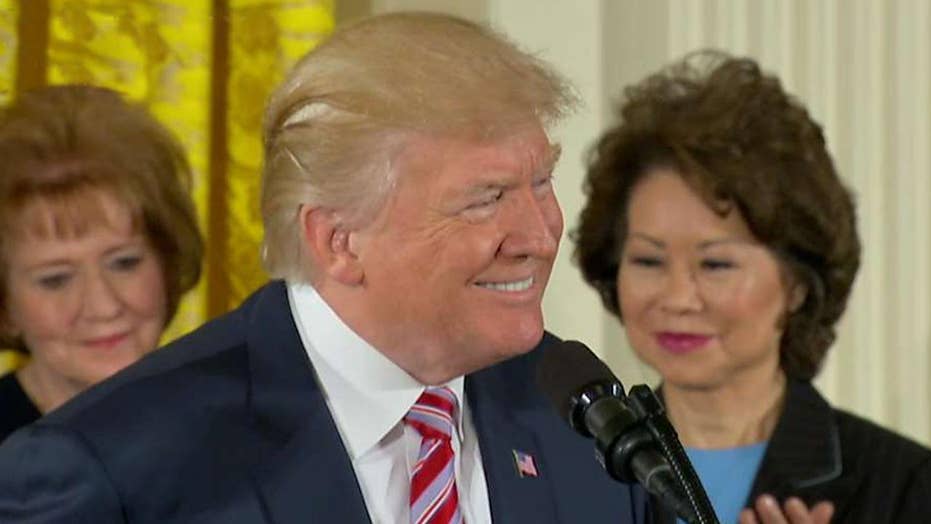 President Trump announced his plan Monday to privatize America's air traffic control system and separate it from the FAA -- arguing the federal agency is too “antiquated” to innovate and casting the overhaul as an initial step toward improving the country’s infrastructure.

Trump wants to turn the air traffic control system into a modernized non-profit organization that operates on fees paid by airlines and others that use U.S. airspace, instead of taxes.

“We are prepared to enter a great new era in American aviation,” Trump said, in announcing the plan at the White House. “It’s time to join the future and make flights quicker, safer, more reliable.”

Trump argues the changes are necessary because the existing system has been unable to keep pace with the fast-changing aviation industry that now includes commercial space flights and unmanned aircraft systems, also known as drones.

The changes also would save fuel, improve safety and lower operations costs, according to the administration.

There are about 50,000 airline and other aircraft flights a day in the United States. Trump said Monday that the existing system was created when the country had about 100,000 annual airline passengers, compared to nearly 1 billion today.

Both sides of the privatization debate say the system is one of the most complex and safest in the world. And winning congressional approval would still be an uphill battle for Trump.

Democrats have largely opposed the changes, warning that the proposed board overseeing the estimated 300 air traffic facilities and around 30,000 employees would be dominated by airline interests.

“By privatizing our nation’s air traffic control system, Trump is once again putting the interests and the pocketbooks of airline executives before the safety and well being of American workers and passengers," the Democratic National Commitee said after the announcement, part of a renewed White House focus on infrastructure.

On the campaign trail, Trump touted plans to improve the country’s aging roads, bridges and airports. He was expected to announce a plan shortly after taking office, considering it had bipartisan support. However, fellow Republicans on Capitol Hill were wary about a plan that would add billions to the deficit or increase taxes.

In addition, the president’s overall legislative agenda has been slowed by efforts to overhaul ObamaCare and investigations into whether the Trump campaign colluded with Russia in the 2016 White House race.

"Since the first days in office, the president has been working tirelessly to fulfill the campaign promises he made to America," Vice President Mike Pence said in introducing Trump at the East Room event. "Starting today, the president will take historic steps to rebuild America."

In his privatization push, Trump has at least preliminary support of major aviation groups including the Southwest Airlines Pilot Association.

“We've supported privatization,” said Jon Weaks, a pilot and president of the Southwest pilots association, who attended the event Monday.

“We just want a stabilized stream of funding for air traffic control,” said Weaks, echoing what airlines and the controllers union have said for years.

Weaks also said major airlines already have the next generation technology that Trump says the FAA has yet to bring into service.

And he agrees with the president in that fees will be more efficient than the patchwork of taxes that now support the aviation system.

However, Weaks said his group must see the final legislation before giving its full support.

Mark Baker, CEO of the Aircraft Owners and Pilots Association, said in a separate statement that his group has some concerns with the plan. He said his organization is "open to proposals aimed at making the air traffic control system more efficient and delivering technology in a timely and cost effective manner" but will not back policies that impose user fees on general aviation.

"We applaud President Trump’s calls to invest and improve our nation’s infrastructure including our airports. However, the U.S. has a very safe air traffic system today and we don’t hear complaints from our nearly 350,000 members about it," he said.

The changes, if approved by Congress, would take about three years to fully implement and bring the United States in line with the recommended practices of other major countries, according to the White House.

The plan is similar to a bill proposed last year by New York GOP Rep. Bill Shuster, chairman of the House Infrastructure and Transportation Committee, which also calls for a non-government, non-profit agency.

U.S. airlines have been campaigning for decades to separate air traffic control operations from the FAA and have also argued that FAA efforts to modernize the air traffic system is taking too long and has produced too few benefits.

Such efforts gained momentum when the union that represents air traffic controllers agreed to support Shuster’s plan, in exchange for guarantees that controllers would retain their benefits, salaries and union representation.

The proposed technology changes include moving from the current system based on radar and voice communications to one based on satellite navigation and digital communications.

"After billions and billions in taxpayer dollars spent and way too many years of delay, we're still stuck with an ancient, broken, antiquated system," Trump said Monday.

Union officials have also complained that the FAA has been unable to resolve chronic controller understaffing at some of the nation's busiest facilities and pointed to the modernization effort's slow progress.

But FAA Administrator Michael Huerta has said the agency has made progress during the past decade in updating its computers and other equipment in order to move from a radar-based to a satellite-based control system.