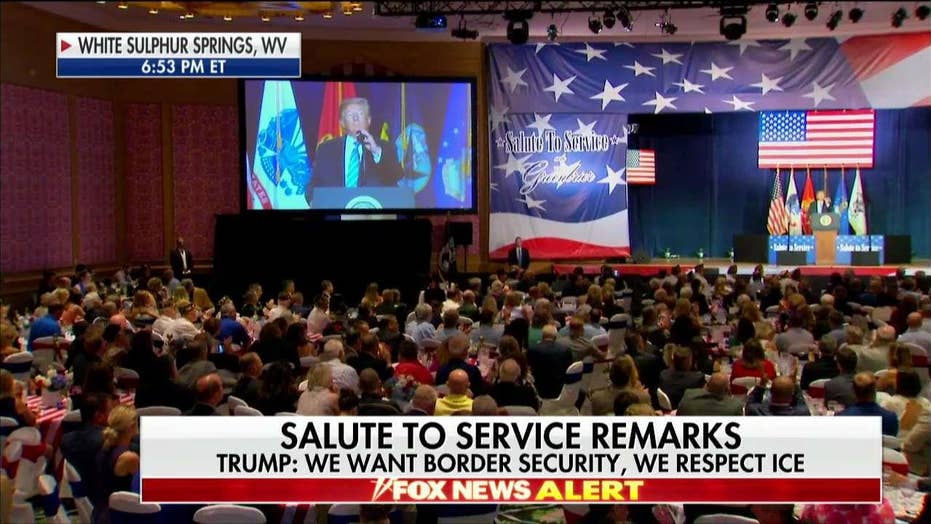 President Trump touted his administration's accomplishments for the military and veterans at a charity dinner in West Virginia on Tuesday, honoring what the president called the "sweat, blood, and sacrifices" of the armed forces.

The event, on the eve of Independence Day, was a prelude to the rebranded PGA golf tournament "A Military Tribute at the Greenbrier" -- and Trump made sure to mention a few of the golf pros in attendance.

“I like Phil, and Phil I think likes me,” Trump said, referring to golf legend Phil Mickelson.

The president also heaped praise on "Big Jim" Justice, the governor of the deep-red state who switched parties to become a Republican last year, as well as West Virginia Senate hopeful Patrick Morrisey.

Morrisey, who Trump said had "incredible energy," pulled off an upset in the Republican primary for Senate earlier this year.

"He went right into the machine gun nests -- John Daly wouldn't do that, and he's a pretty tough cookie."

But Trump soon turned to the centerpiece of the event -- military families and the White House's work on their behalf.

The president specifically praised Hershel "Woody" Williams, a "legendary" veteran of the World War II Battle of Iwo Jima, noting that he had voluntarily charged into machine gun nests to clear a path for U.S. troops.

"He went right into the machine gun nests -- John Daly wouldn't do that, and he's a pretty tough cookie," Trump said, noting Daly's presence in the audience. "John would you do that? I don't think so. It would definitely hurt your golf game, John. That's the end of golf."

Trump noted that his administration has improved medical care for veterans and boosted resources and training for the military.

"We are restoring American security by rebuilding our great military," Trump said. "We have secured, this year ... a record $700 billion for our military. And next year, $716 billion.

"We are building it so big -- so powerful, stronger than we've ever been," Trump added. "And hopefully, we'll never have to use it. As the golfers can tell you, the stronger we get, the less likely it is we will have to use it." 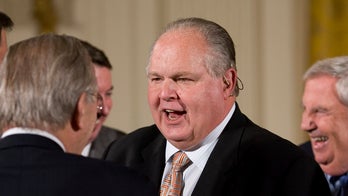