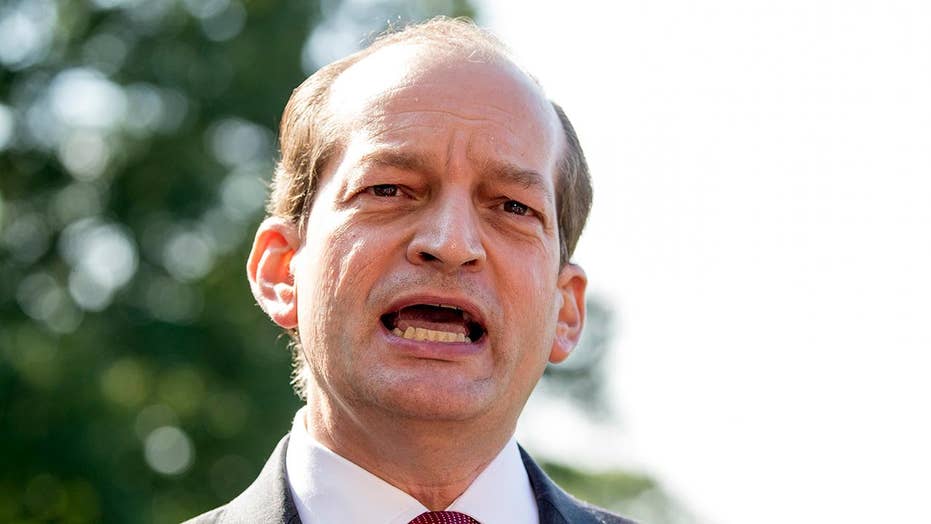 The surprise move -- which top Republicans privately supported -- was a visible manifestation of the close personal bond Trump has forged with the Scalia family in recent years. The confirmation process for Justice Neil Gorsuch, who ultimately filled Justice Scalia's seat, sparked the connection.

Acosta stepped down as head of the Labor Department last Friday over his past involvement in a cushy 2008 plea deal for financier Jeffrey Epstein, who is now facing federal sex trafficking charges.

Acosta's resignation is to become official on Friday, when his deputy, Patrick Pizzella, will take over as acting Labor secretary pending Scalia's confirmation, officials said.

Scalia, 55, has been a partner in the Washington office of the international law firm Gibson, Dunn & Crutcher. He's expected to face headwinds from Democrats in his Senate confirmation hearings, in part because he routinely has represented major corporations in key cases involving workers' rights.

"President Trump is missing an opportunity to nominate a fighter for workers, like a union member, to be America’s next Labor Secretary," Schumer said. "Instead, President Trump has again chosen someone who has proven to put corporate interests over those of worker rights. Workers and union members who believed candidate Trump when he campaigned as pro-worker should feel betrayed.”

In 2005, Walmart hired Scalia to defend against whistleblower lawsuits by employees who alleged wrongdoing in the company. Scalia also helped overturn a Maryland law in 2006 that would have required big companies such as Walmart to spend more on employee health care in the state. That law ran afoul of a federal statute aimed at reducing red tape for certain national employers, who otherwise would have had to afford significantly different benefits to employees depending on their state of employment.

The Wall Street Journal wrote in 2012 that Scalia "has emerged as one of the industry's go-to guys for challenging financial regulations."

In some of his biggest cases, according to the Journal, Scalia "focused on how regulators analyze the cost of new rules, building a legal strategy that echoes a political argument of Republican [then-] presidential candidate Mitt Romney—that added regulations are holding back the economy."

The appointment would be something of a homecoming for Scalia, who served as the chief legal officer, or Solicitor, for the Labor Department under President George W. Bush.

Justice Antonin Scalia, who died in 2016, reportedly was 'enthusiastic' about a Trump presidential run. (Reuters, File)

In that role, he oversaw not only all Labor Department litigation, but also provided "legal advice on rulemakings and administrative law," according to his biography on Gibson Dunn's website.

Additionally, Scalia was a special assistant to Attorney General Bill Barr -- when he was the attorney general for the first time, in President George H.W. Bush's administration. Scalia also was a speechwriter for Education Secretary William Bennett.

In 2018, Scalia secured a win for the U.S. Chamber of Commerce by convincing a judge to overturn the Labor Department's Obama-era 2016 fiduciary rule governing retirement account advisers, which Scalia said had "very serious problems." A judge agreed with conservatives who said the Obama administration had "overreached" in how it classified advisers as fiduciaries, who were therefore obligated to act in their clients' best interests -- and put clients' interests ahead of concerns for their own compensation.

The Fifth Circuit Court of Appeals found fatal problems in how the rule defined advisers and "financial advice," and critics said the rule made it harder to charge commissions and earn profit from advising smaller accounts.

He added, "I’m confident he’ll be a champion for working Americans against red tape and burdensome regulation as Labor Secretary."

In announcing Scalia's selection, Trump sounded notes of praise not only for the nominee, but also for his own administration.

"I am pleased to announce that it is my intention to nominate Gene Scalia as the new Secretary of Labor," Trump wrote in a tweet late Thursday. "Gene has led a life of great success in the legal and labor field and is highly respected not only as a lawyer, but as a lawyer with great experience working with labor and everyone else."

Maureen Scalia, the widow of the late Supreme Court Justice Antonin Scalia, acknowledging applause after being mentioned by President Donald Trump during a speech to Congress. (REUTERS/Kevin Lamarque, File)

And, at a Medal of Freedom ceremony honoring the late justice at the White House last year, Trump joked about the fact Maureen and her husband, who died in 2016, had nine children together.

"You were very busy," Trump said, to laughter. "Wow. Wow. I always knew I liked him."

And in 2017, at his first address to a joint session of Congress, Trump recognized Maureen, and remarked that her husband would "forever be a symbol of American justice."