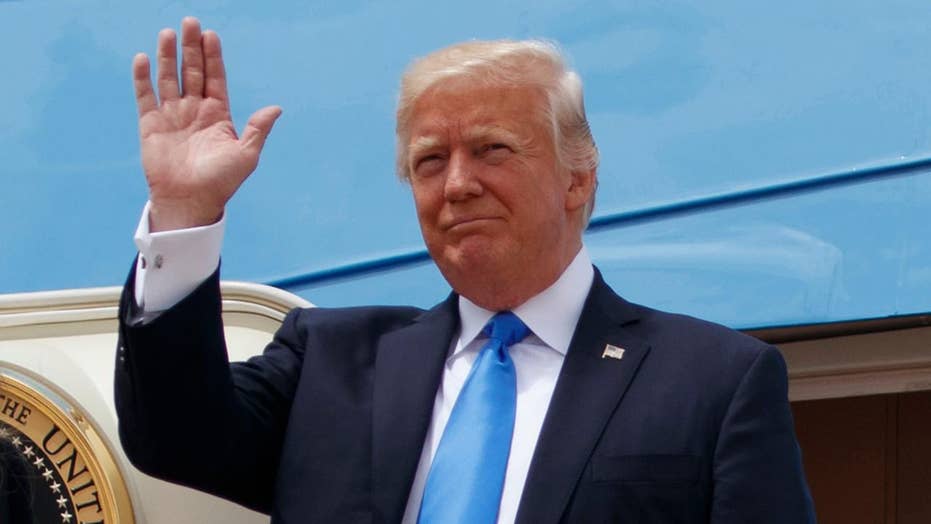 President Trump Sunday in a highly-anticipated speech to Muslim leaders during his first foreign trip is expected to call for unity in the fight to “stamp out extremism.”

During his second day of his first trip abroad, Trump’s speech in Riyadh, Saudi Arabia will address the leaders of 50 Muslim-majority countries to cast the challenge of extremism as a “battle between good and evil” and urge Arab leaders to “drive out the terrorists from your places of worship,” according to a draft of the speech.

“Our goal is a coalition of nations who share the aim of stamping out extremism and providing our children a hopeful future that does honor to God,” Trump is expected to say according to excerpts of his speech. “Our friends will never question our support, and our enemies will never doubt our determination.”

Trump will tell Muslim leaders that the only way to combat radical terrorism is “if the forces of good are united” and calls for countries to do their “fair share” in the fight.

“America is prepared to stand with you – in pursuit of shared interests and common security,” he will say.

Trump’s centerpiece speech of his two-day visit to Saudi Arabia comes after he joined leaders of the Gulf Cooperation Council in an effort to counter the financing of terrorism. The U.S. has joined leaders from Bahrain, Kuwait, Oman, Saudi Arabia and the United Arab Emirates.

“This is not a battle between different faiths, different sects, or different civilizations,” Trump will say. “And it means standing together against the murder of innocent Muslims, the oppression of women, the persecution of Jews, and the slaughter of Christians.”

In his first overseas trip as president, Trump pledged to work with Saudi Arabia leader King Salman to bring peace to the Gulf region and forge stronger economic ties, in large part through a roughly $10 billion arms deal.

The arms deal is part of large, $350 billion economic packages between the ally nations.

Trump and first lady Melania Trump were greeting in Saudi Arabia at the airport by 81-year King Salman, in a red carpet ceremony that also included a military flyover in which several jets left a red, white and blue streamers.

Trump called his visit to Saudi Arabia "a great honor" joined the king in a brief coffee ceremony at the airport terminal before heading to his hotel and the official events of the day.

The next stop in the president’s nine-day trip will be Israel and then the Vatican where he will have an audience with Pope Francis. Next, Trump will meet with allies at a NATO summit in Brussels and the Group of 7 wealthy nations in Sicily.

“Great to be in Riyadh, Saudi Arabia,” Trump tweeted upon landing in Saudi Arabia aboard Air Force One. “Looking forward to the afternoon and evening ahead.”

The first lady wore a black pantsuit with a golden belt and did not cover her head for the arrival, consistent with custom for foreign dignitaries visiting Saudi Arabia.

Trump shook hands with the king, compared to then-President Barack Obama in 2009 appearing to bow before then King Abdullah, a move some viewed as a sign of American weakness.

Trump, during his winning presidential campaign and in the first several months of his presidency, has argued that the United States can no longer be the world’s police officer and that other nations must become more self-sufficient in efforts to combat such terror networks as al Qaeda and the Islamic State and in protecting themselves against rogue nations like Iran and North Korea.

After two days of meetings in Riyadh, Trump will travel to Israel and then the Vatican to meet with Pope Francis. Next, Trump will meet with allies at a NATO summit in Brussels and the Group of 7 wealthy nations in Sicily.

The multi-billion dollar arms deal “in the clearest terms possible” shows the United States’ commitment to Saudi Arabia and other Gulf partners and expands economic opportunities, the White House said.

The deal will include tanks, combat ships, missile defense systems, radar and communications and cybersecurity technology. And it will support tens-of-thousands of new jobs in the U.S. defense industrial base, the White House said.

Jubeir said Trump "certainly has the vision and, we believe, strength to bring about Middle East peace.”

He also called the Trump’s trip a “truly historic visit.”

He also took a question about a recent news report about somebody within the White House being a person of interest amid ongoing investigations into whether Trump and his associates colluded with Russia to help Trump win the 2016 presidential race.

Tillerson said he had “no knowledge” about such a person of interest.

White House officials hope the trip gives Trump the opportunity to recalibrate after one of the most difficult stretches of his young presidency. The White House badly bungled the president's stunning firing of FBI Director James Comey, who was overseeing the federal government’s investigation into possible Russia collusion.

Trump on Sunday will also hold meetings with more than 50 Arab and Muslim leaders converging on Riyadh for a regional summit focused largely on combating the Islamic State and other extremist groups.

Still, the centerpiece of Trump's visit to Saudi Arabia will likely be the speech Sunday at the Arab-Islamic-American summit.

White House aides view the address as a counter to Obama's 2009 speech to the Muslim world, which Trump criticized as too apologetic for U.S. actions in the region.

Trump will call for unity in the fight against radicalism in the Muslim world, casting the challenge as a "battle between good and evil" and urging Arab leaders to "drive out the terrorists from your places of worship," according to a draft of the speech obtained by The Associated Press. The draft notably refrains from mentioning democracy and human rights — topics Arab leaders often view as U.S. moralizing — in favor of the more limited goals of peace and stability.

It also abandons some of the harsh anti-Muslim rhetoric that defined Trump's presidential campaign and does not contain the words "radical Islamic terror," a phrase Trump repeatedly criticized Hillary Clinton for not using during last year's campaign.