Trump: Largest tax cut in the history of our country

President Trump speaks after the passage of tax reform.

A jubilant President Trump on Wednesday celebrated Congress' passing of a sweeping tax-reform bill by heaping praise on Republican lawmakers and referring to them as his fellow “warriors.”

In his less than one year in office, the president memorably has sparred with Senate Majority Leader Mitch McConnell, House Speaker Paul Ryan and other lawmakers in his party.

But hours after the House handed Trump his first major legislative victory by sending a $1.5-trillion tax package to his desk, Trump expressed his thanks to the GOP legislators and portrayed the party as unified.

“All friends -- I look at these people,” the president said during a celebration on the south lawn of the White House. “It's like we're warriors together.”

Surrounded by these Republican members of Congress, Trump called the effort to pass tax reform “an amazing experience,” boasting that it “hasn't been done in 34 years.” 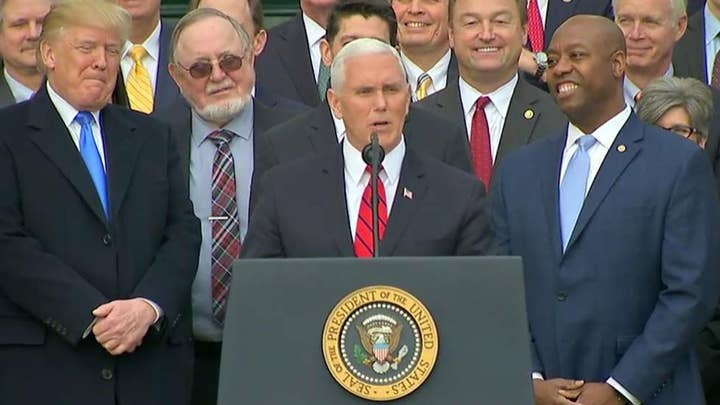 He added, “It’s the largest tax cut in the history of our country.”

Trump singled out several Republicans who were helpful in getting the bill passed, including McConnell and Ryan.

“Paul Ryan and Mitch, it was a little team,” Trump said. “We just got together and we worked very hard, didn't we?”

Both Republican leaders praised Trump for his efforts.

“This has been a year of extraordinary accomplishment for the Trump administration,” McConnell said, also citing the president’s judicial appointments and efforts to cut regulations. 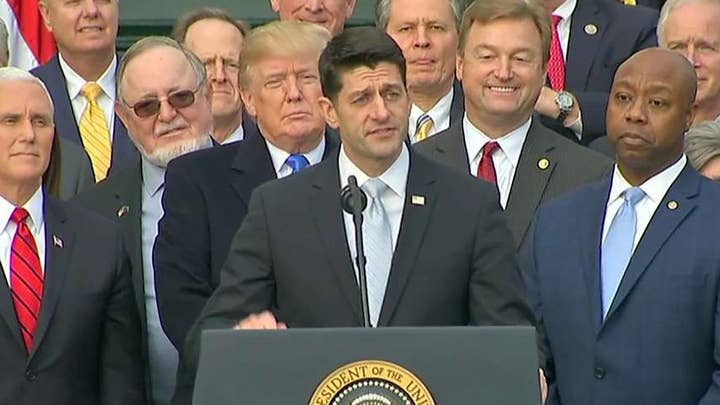 The passage of the bill, just before the end of the year and the looming congressional recess, gives Trump a long-sought Capitol Hill victory, after repeated attempts to overhaul ObamaCare failed in the face of internal Republican divisions and unified Democratic opposition. The tax bill does include one major rollback of the Affordable Care Act, repealing the individual mandate requiring Americans to buy health insurance or face a penalty.

While Democrats uniformly opposed the package, the White House and GOP leaders have been triumphant, vowing that the bill’s popularity would improve once taxpayers see the effects.

The Tax Policy Center estimates that 80 percent of taxpayers will see a tax cut next year.