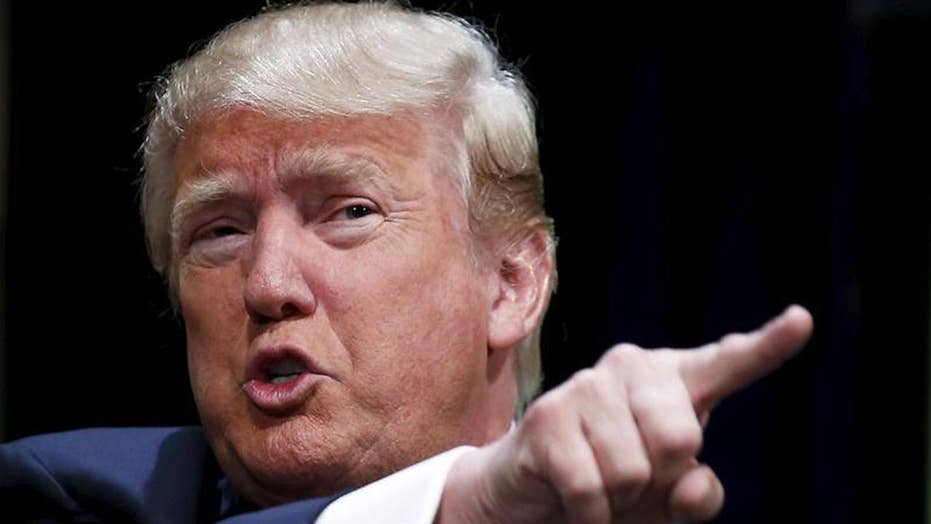 Trump continues to put pressure on lawmakers on health care

President Trump, hoping to prod reluctant lawmakers to once again try for an ObamaCare overhaul deal, has zeroed in on a benefit that could serve as a powerful piece of leverage for the negotiator-in-chief.

The president's ultimatum to Congress: Figure out a way forward on health care, or lose a valuable insurance carve-out for you and your staff. The benefit allows part of their ObamaCare premium costs to be covered by taxpayers.

“The president will not accept those who said it is, quote, time to move on,” White House Counselor Kellyanne Conway said on "Fox News Sunday."

The president has twice threatened to target the benefit in the wake of Senate Republicans failing to pass their so-called ‘skinny repeal’ health care plan on Friday.

“If ObamaCare is hurting people, & it is, why shouldn’t it hurt the insurance companies & why should Congress not be paying what public pays?” Trump tweeted on Monday. Over the weekend, Trump similarly warned he would "end" the "BAILOUTS" for members of Congress if they don't pass a health bill soon.

The president issued the warning both to the insurance industry (referring to controversial payments that could be in jeopardy) and to Congress. But his threat to end the benefit for the latter, the subject of a long-running Washington battle, could grab lawmakers' attention -- considering allies say he has the authority to follow through.

“I think the president would be absolutely within his rights to cancel the Obama rule that conferred this subsidy on Congress,” Rep. Ron DeSantis, R-Fla., said.

The carve-out itself dates back to 2013.

Under the Obama administration, the Office of Personnel Management decided to grant what is often described as an exemption under the Affordable Care Act allowing lawmakers and their staff to keep getting a government subsidy for health care.

The decision has drawn criticism from Republicans for years.

DeSantis said killing the exemption would give lawmakers an incentive to get a health care plan approved.

“I applaud the president for raising this issue and I think if he moves swiftly on it, I think you’d see a lot of these members and senators would want to work to repeal ObamaCare very quickly,” DeSantis said on “Fox & Friends” Monday, adding that he personally declines the "subsidy."

DeSantis, who introduced legislation in January to end these exemptions, referred to the rules that apply to small businesses with 50 employees or less. Congress, by contrast, employs over 20,000. Sen. Chuck Grassley, R-Iowa, and Sen. Ron Johnson, R-Wis., have been outspoken on the exemptions as well, pushing to repeal payments for members of Congress.

“Other Americans who are in these exchanges are not getting employer subsidies—it’s illegal and yet somehow Congress gets a work-around,” DeSantis said.

But in a tweet storm on Saturday, Democratic Connecticut Sen. Chris Murphy slammed Trump for his “threat.”

“This is a clear threat to Congress: pass my health bill or as punishment I will end health care for you, your staff, & your constituents,” Murphy tweeted. “Trump isn’t saying these things will happen naturally. He has the power to cut off health care for leg branch employees & crater exchanges.”

Murphy added moments after, “I would argue this is a very serious moment. President making personal threats to us and our constituents if we don’t pass his bill.”

“This fraud of instructing Congress to masquerade as a small business was the key to the scheme, because if members of Congress and their staff had signed up for ObamaCare under the individual exchange—as any other American losing employer coverage has to—they would have had to pay their own premiums,” the letter stated, telling Trump he has “the power to end the scheme by directing OPM to rescind the Obama rule.”

White House Director of Legislative Affairs Marc Short said this policy is a “perfect example of the swamp-like atmosphere in D.C.”

“OPM and the Obama administration put out a special ruling that said that members of Congress and staffs don’t have to live by this law,” he told "Fox & Friends."

“You are forcing us to live with this, but you are getting an exemption,” Short said.