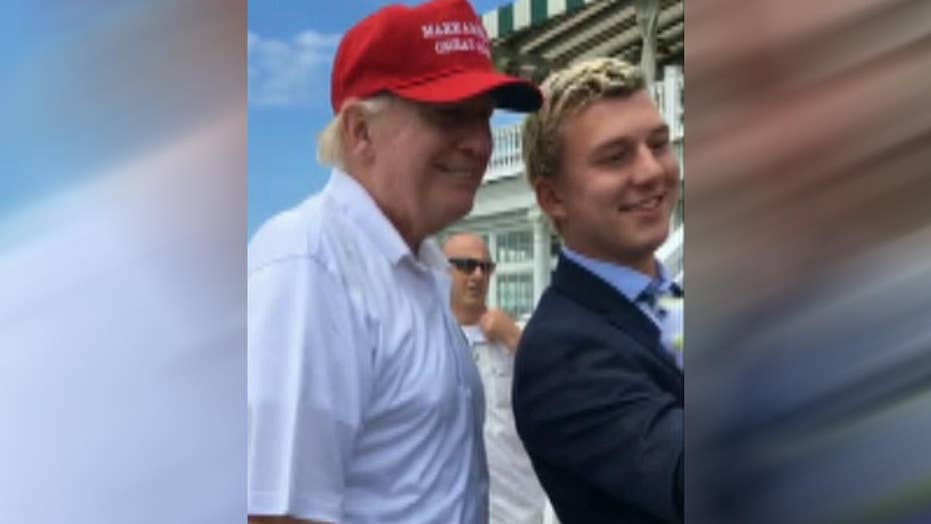 The president talks to guests at his Bedminster, NJ golf club

President Trump took a break from his “working vacation” Saturday by surprising a handful of wedding guests at Trump National Golf Club in New Jersey.

Dressed in golf attire and a “Make America Great Again” hat, Trump asked, “Everyone having a good time?” while taking a moment to smile for a selfie with a supporter, before walking back to a golf cart at his Bedminster resort.

TRUMP SET TO EMBARK ON FIRST VACATION SINCE INAUGURATION

Trump has been known to “crash” weddings before. In June, the president surprised newlyweds at his New Jersey club, reportedly giving the bride a “hug and a kiss.”

The president is currently taking a 17-day “working” vacation at his Bedminster country club while the West Wing undergoes ventilation renovations, a trip away from the White House that the president insisted on Twitter is “not a vacation.”

A White House official told Fox News that Trump will be having meetings with new Chief of Staff John Kelly, White House advisers and lawmakers during his vacation throughout the next two weeks.