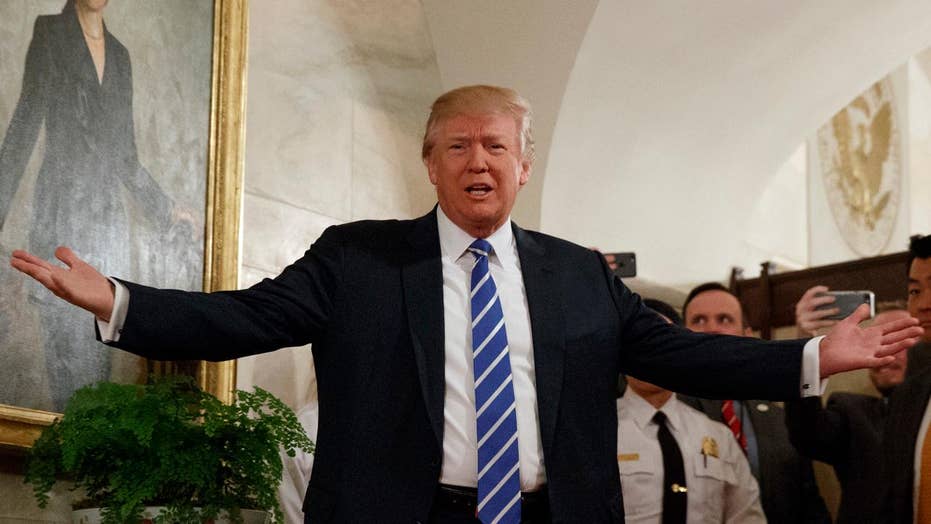 With a portrait of then-first lady Hillary Clinton looming over his right shoulder, President Trump surprised a group of visitors Tuesday on the first public tour of the White House since the inauguration.

Trump was greeted with boisterous applause and cheers from the group of about 50 tourists, mostly children, who were gathered in the basement of the White House residence.

Shortly after 9:30 a.m., the president dropped in on the tour and then motioned for some of the children to join him for a picture. Only 10-year old Jack Cornish from Birmingham, Ala., was brave enough to take Trump up on his offer.

After taking a picture with Cornish, a 5th grader at Briarwood Christian School, the president left the group to resume their 45-minute tour, according to the White House pool report.

First lady Melania Trump announced the reopening of the White House, after it was closed to tours for several weeks, in a statement last month.

“I am excited to reopen the White House to the hundreds of thousands of visitors who come each year. The White House is a remarkable and historic site and we are excited to share its beauty and history. I am committed to the restoration and preservation of our Nation’s most recognizable landmark,” she said.

It is common for public tours to be briefly suspended during a presidential transition, but the hiatus took longer as the Trump administration hired staff and performed routine maintenance.

The first lady's chief of staff, Lindsay Reynolds, said the White House Visitors Office was "using this time to tend to routine maintenance, updates and renovations along the tour route to ensure the guest experience is top notch."

The tours are self-guided and requests for public tours are made through one's member of Congress. They are available from 7:30 a.m. to 11:30 a.m. Tuesday through Thursday and 7:30 a.m. to 1:30 p.m. Fridays and Saturdays, except for federal holidays.