President Trump lashing out at his attorney general because of recent cases brought against Hunter and Collins. Peter Doocy reports.

President Trump lashed out at Attorney General Jeff Sessions in a string of tweets on Monday, accusing him of hurting Republican chances in the upcoming midterm elections with a series of Justice Department investigations.

The president apparently was referring to the current investigations into GOP Reps. Duncan Hunter of California and Chris Collins of New York. Fox News has reached out to the White House for additional clarification, and the Justice Department did not immediately respond.

Hunter and his wife, Margaret, were indicted last month on charges of illegally converting $250,000 in campaign funds for personal expenses and filing false records, while Collins was indicted earlier in August on insider-trading charges. Prosecutors pinpointed the alleged insider trading to June 2017, after Trump took office.

Trump also tweeted: “The Democrats, none of whom voted for Jeff Sessions, must love him now. Same thing with Lyin’ James Comey. The Dems all hated him, wanted him out, thought he was disgusting - UNTIL I FIRED HIM! Immediately he became a wonderful man, a saint like figure in fact. Really sick!”

Monday’s tweets continued a long-running gripe Trump has had with Sessions ever since the attorney general recused himself last year from the Russia investigation. Last month, the president tweeted that Sessions "doesn't understand what is happening underneath his command position" and told "Fox & Friends" that his attorney general had "never taken control of his department."

The president also said the only reason he named Sessions to one of his most important Cabinet-level positions was the former Alabama senator's early support in the 2016 presidential election. 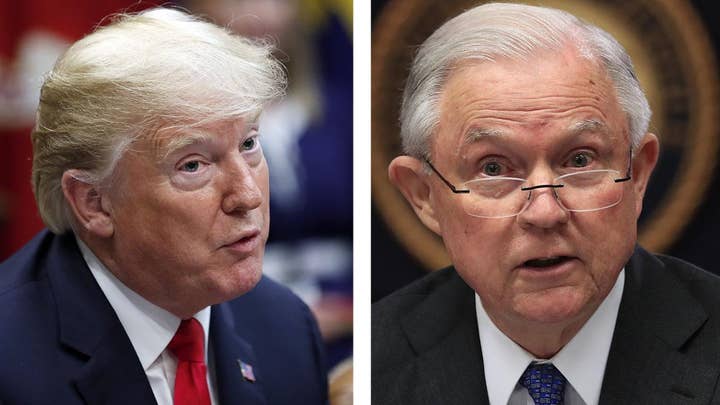 In an interview with Bloomberg on Thursday, Trump said Sessions would remain in his job at least until the November midterm elections. The president did not elaborate on whether he would keep Sessions on as attorney general following the election.