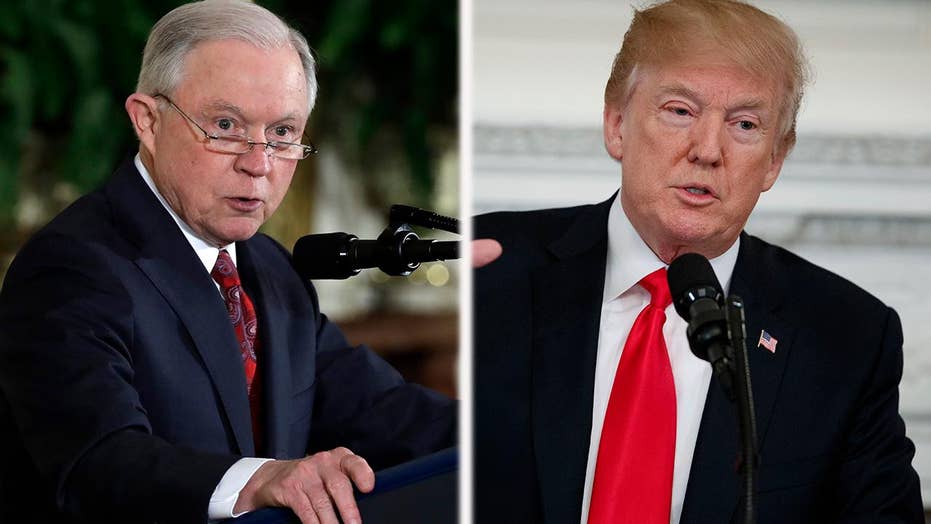 Sessions says in a statement 'as long as I am the attorney general, I will continue to discharge my duties with integrity and honor'; chief intelligence correspondent Catherine Herridge reports from Washington.

President Trump put Attorney General Jeff Sessions back in his political crosshairs on Wednesday, blasting him for tapping an “Obama guy” to investigate allegations of government surveillance abuse.

The president was reacting to Sessions revealing a day earlier that the Justice Department’s inspector general will investigate the allegations, in light of memos released on Capitol Hill about FBI and DOJ efforts to obtain FISA warrants to spy on a former Trump campaign adviser.

“Why is A.G. Jeff Sessions asking the Inspector General to investigate potentially massive FISA abuse. Will take forever, has no prosecutorial power and already late with reports on Comey etc. Isn’t the I.G. an Obama guy? Why not use Justice Department lawyers? DISGRACEFUL!” Trump wrote.

Sessions confirmed on Tuesday, in response to a question from Fox News’ Catherine Herridge, that the abuse accusations would be investigated at the IG level.

“The inspector general will take that as one of the matters he'll deal with,” he said, in reference to DOJ IG Michael Horowitz. 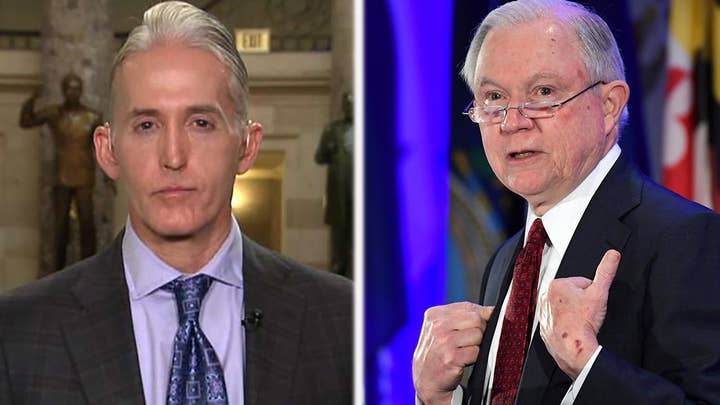 In a brief statement issued Wednesday following the president's tweet, Sessions vowed to press on.

"We have initiated the appropriate process that will ensure complaints against this Department will be fully and fairly acted upon if necessary," he said. "As long as I am the Attorney General, I will continue to discharge my duties with integrity and honor, and this Department will continue to do its work in a fair and impartial manner according to the law and Constitution."

Horowtiz for months has been investigating the FBI and DOJ’s actions related to the probe of Hillary Clinton’s private email use while secretary of state.

A final report is expected soon, though Trump seemed to complain Wednesday about the amount of time it has taken. Horowitz has publicly said that the report could be completed this spring.

Horowitz was confirmed to the post during the Obama administration, in 2012. However, while Trump labeled him as an “Obama guy,” he also served as commissioner on the U.S. Sentencing Commission during the George W. Bush administration. His generally enjoys a solid reputation – though his work on the Clinton case, and now surveillance abuse, could make him a target for both sides of the aisle.

"I have had a number of interactions with Inspector General Horowitz, including as recently as earlier this month. He has been fair, fact centric, and appropriately confidential with his work. He was confirmed by the U.S. Senate without a single dissent,” he said in a statement. “I have complete confidence in him and hope he is given the time, the resources and the independence to complete his work.”

For the past several weeks, lawmakers on Capitol Hill have been at war over those allegations.

Republicans on the House Intelligence Committee released a memo in early February detailing the surveillance of Trump campaign adviser Carter Page, saying an infamous, unverified dossier funded by Democrats "formed an essential part" of the application to spy on him.

Democrats released a rebuttal memo on Saturday, downplaying the role of the dossier.

The White House responded to the GOP memo by saying it “raises serious concerns about the integrity of decisions made at the highest levels of the Department of Justice and the FBI to use the government’s most intrusive surveillance tools against American citizens.”

Sessions said earlier this month on Fox News’ "Sunday Morning Futures" that that there would be an investigation into how the FBI used the dossier to secure the surveillance.

“Let me tell you, every FISA warrant based on facts submitted to that court have to be accurate,” he said. “That will be investigated and looked at, and we are not going to participate at the Department of Justice in providing anything less than the proper disclosure to the court before they issue a FISA warrant.”

The involvement of the IG was not clear until Tuesday.

This is hardly the first time Trump has gone after his attorney general, who was among Trump’s earliest supporters during the 2016 presidential campaign.

An updated edition of the book, “The Gatekeepers: How the White House Chiefs of Staff Define Every Presidency,” revealed that former Chief of Staff Reince Priebus had to intervene last year to dissuade Sessions from resigning.

This was reportedly after Trump personally excoriated Sessions, calling him an “idiot” and blasting him for recusing himself from the Russia investigation.