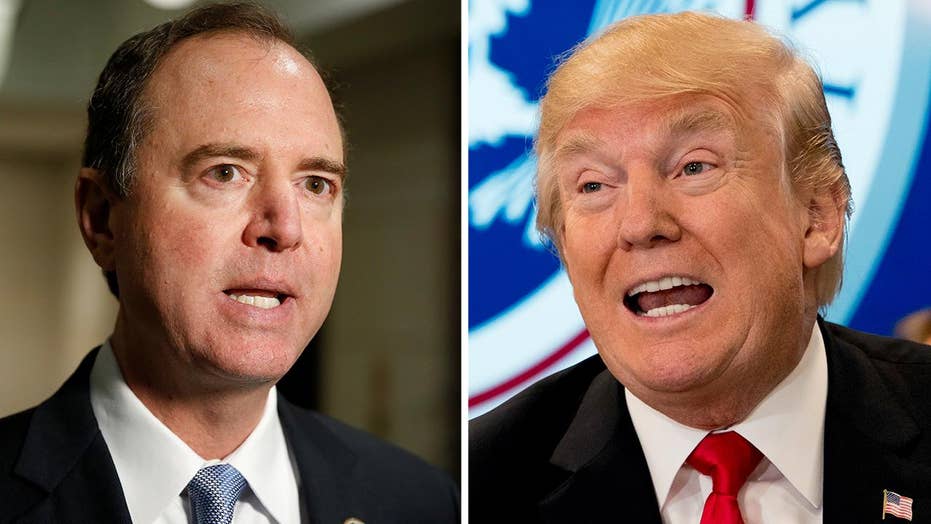 Schiff swings back at Trump in Twitter war over memo

Kevin Corke reports from the White House on the war of words between the president and ranking Democrat.

President Trump blasted the top Democrat on the House Intelligence Committee Monday amid the mounting fight over the panel's 'surveillance' memo, calling “Little Adam Schiff” one of the “biggest liars and leakers in Washington.”

The president's early Monday tweet came as Democrats, led by Schiff, continued to condemn majority Republicans for publishing the memo claiming authorities used a salacious anti-Trump dossier to obtain a warrant to monitor a Trump associate.

“Little Adam Schiff, who is desperate to run for higher office, is one of the biggest liars and leakers in Washington, right up there with Comey, Warner, Brennan and Clapper!” Trump tweeted. “Adam leaves closed committee hearings to illegally leak confidential information. Must be stopped!”

Schiff, D-Calif., fired back within minutes, tweeting: "Mr. President, I see you’ve had a busy morning of 'Executive Time.' Instead of tweeting false smears, the American people would appreciate it if you turned off the TV and helped solve the funding crisis, protected Dreamers or...really anything else."

Schiff sits as the ranking member on the intelligence committe. He is expected Monday to officially request the committee release Democratic members’ own 10-page memo, with the promise to send it to the Justice Department for redactions.

FISA MEMO: STEELE FIRED AS AN FBI SOURCE FOR BREAKING 'CARDINAL RULE' --LEAKING TO THE MEDIA

“That’s it? Dishonest and misleading memo wrecked the House intel committee, destroyed trust with Intelligence Community, damaged relationship with FISA court, and inexcusably exposed classified investigation of an American citizen. For what? DOJ & FBI must keep their jobs,” Comey tweeted on Friday.

“I think it, it really underscores just how partisan Mr. Nunes has been,” Brennan said on NBC’s “Meet the Press” Sunday. “He has abused his office of the chairmanship of HPSCI. And I don’t say that lightly.”

The memo showed what Republicans describe as government surveillance abuse under the Obama administration. It included purported testimony from former FBI deputy director Andrew McCabe that the FBI and the Justice Department would not have sought surveillance warrants to spy on former Trump campaign adviser Carter Page without the dossier.

The memo stated that information on the dossier also was “omitted” when seeking a FISA warrant for Page. The dossier was written by ex-British spy Christopher Steele, who was hired by research firm Fusion GPS. The Clinton campaign and the Democratic National Committee paid for the opposition research through law firm Perkins Coie.

“Neither the initial application in Oct. 2016, nor any of the renewals, disclose or reference the role of the DNC, Clinton campaign, or any party/ campaign in funding Steele’s efforts, even though the political origins of the Steele dossier were then known to senior DOJ and FBI officials,” the memo read.

The memo stated that on Oct. 21, 2016, the Justice Department and the FBI “sought and received” a FISA probable cause order authorizing “electronic surveillance” on Page.

According to the memo, the FBI and DOJ obtained “one initial FISA warrant” targeting Page, and three FISA renewals from the FISA court. The statute required that every 90 days, a FISA order on an American citizen “must be renewed.”

Later Monday, Trump tweeted that Nunes is “a man of tremendous courage and grit” and “may someday be recognized as a Great American Hero for what he has exposed and what he has had to endure!”