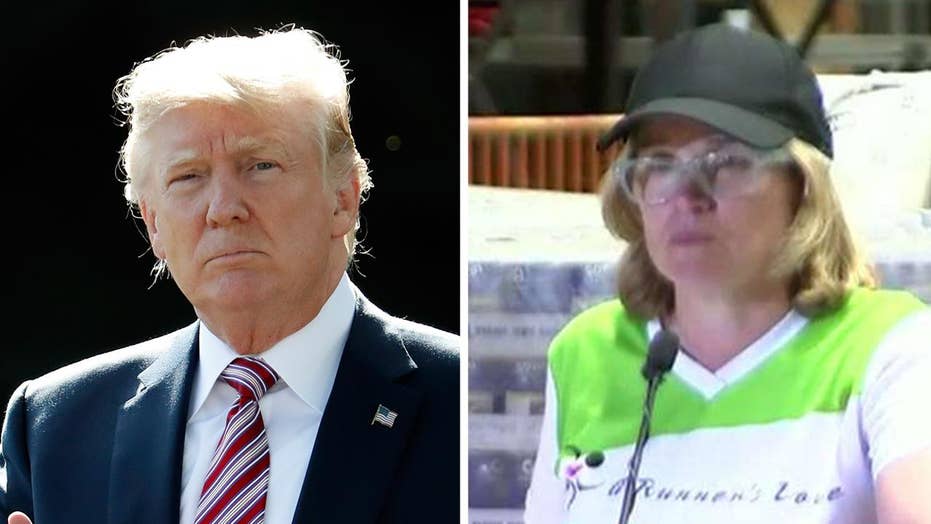 President Trump on Sunday slammed “fake news” and “ingrates” as he continued to defend his administration’s hurricane relief efforts in Puerto Rico.

“We have done a great job with the almost impossible situation in Puerto Rico,” Trump said over three, 140-character maximum tweets. “Outside of the Fake News or politically motivated ingrates … people are now starting to recognize the amazing work that has been done by FEMA and our great Military. All buildings now inspected … ...for safety.

“Thank you to the Governor of P.R. and to all of those who are working so closely with our First Responders. Fantastic job!”

Trump resumed tweeting on the issue after roughly a dozen tweets Saturday on the matter.

They followed San Juan Mayor Yulin Cruz on Friday criticizing the president's effort to get supplies, electricity and other relief to the U.S. island.

Cruz also suggested residents were “dying” as a result of the slow response.

“Such poor leadership ability by the Mayor of San Juan, and others in Puerto Rico, who are not able to get their workers to help,” Trump responded in one of the Saturday tweets. "They want everything to be done for them when it should be a community effort. 10,000 Federal workers now on Island doing a fantastic job.”

He also tweeted: "Results of recovery efforts will speak much louder than complaints by San Juan Mayor. Doing everything we can to help great people of PR!"

Earlier Sunday, FEMA Director Brock Long defended the federal response, citing highways and pharmacies being reopened amid an already “fragile” infrastructure of roads, ports, bridges and airports badly damages by hurricanes Irma, then Maria. He also pointed out that just 16 reported deaths, compared to more than 1,800 in Hurricane Katrina in New Orleans in 2005 and urged people to focus on results, not Cruz when she “spouts off.”

Also on Sunday, the White House said President spoke in the early morning to Puerto Rico Gov. Ricardo Rosselló to reaffirm his administration’s commitment to providing an “unprecedented federal response” to widespread hurricane damage and thank Rossello for his leadership.

The call to Rossello, a Republican, and another to Independent Gov. Kenneth Mapp of the U.S. Virgin Islands, also impacted by the hurricanes.

The White House summary -- known as a “readout” -- of the Sunday phone calls twice included the word “leadership.”

“President Trump thanked the governors for their leadership in responding to and recovering from these catastrophic events,” read one line.

“President Trump pledged his administration’s continued commitment to provide an unprecedented federal response in helping the people of Puerto Rico and the U.S. Virgin Islands. Both governors were very appreciative and complimentary of the administration’s effort, including the president’s leadership,” the summary also stated.

He also tweeted Saturday: "Results of recovery efforts will speak much louder than complaints by San Juan Mayor. Doing everything we can to help great people of PR!"

Cruz, in response, said later Saturday morning that she’ll “continue to do whatever I have to do” to get federal hurricane assistance.

Trump later tweeted: “The Governor of Puerto Rico, Ricardo Rossello, is a great guy and leader who is really working hard. Thank you Ricky!”

He also tweeted: “Just spoke to Governor Kenneth Mapp of the U.S. Virgin Islands who stated that #FEMA and Military are doing a GREAT job! Thank you Governor!”