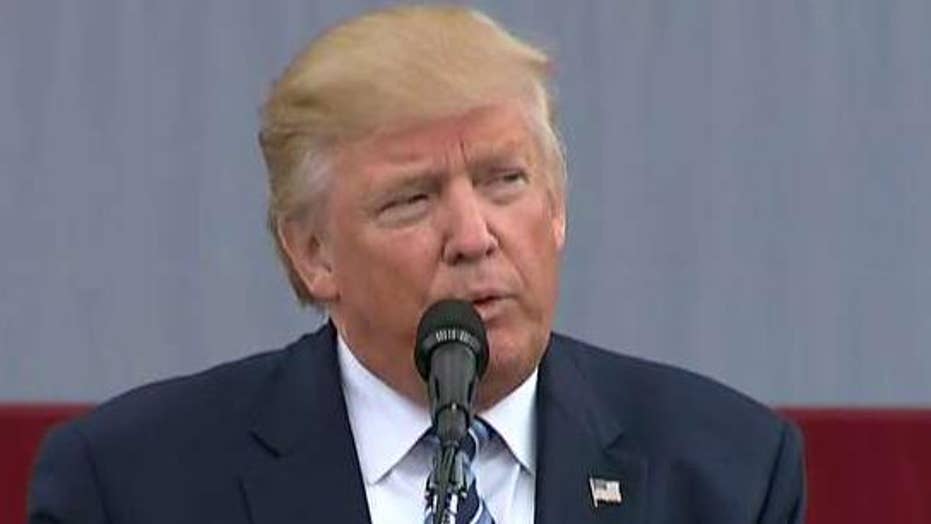 Donald Trump: This whole election is being rigged

The Republican nominee says the election is one big ugly lie

Two more women accused Republican nominee Donald Trump of sexual assault Friday, with a relative of one of them saying that the allegation was "an attempt to regain the spotlight."

Summer Zervos, a former contestant on Trump's NBC reality show "The Apprentice," said the real estate mogul kissed her and groped her after meeting at a Beverly Hills hotel in 2007 to discuss a potential job. Zervos, accompanied at a Los Angeles press conference by attorney Gloria Allred, said she was later offered a lower-paying job at a Trump golf course.

“You do not have the right to treat women as sexual objects just because you are a star,” Zervos said at the press conference, addressing Trump.

Late Friday, the Trump campaign released a statement purporting to be from statement in which a cousin of Zervos said he was "shocked and bewildered" by her account.

John Barry of Mission Viejo, Calif., said in the statement that Zervos spoke glowingly of Trump until the real estate mogul rebuffed an invitation to visit her restaurant during the primary campaign.

"I think Summer wishes she could still be on reality TV, and in an effort to get that back she’s saying all of these negative things about Mr. Trump," Barry said. "That’s not how she talked about him before."

Trump himself issued a statement saying that he "never met [Zervos] at a hotel or greeted her inappropriately a decade ago. That is not who I am as a person, and it is not how I’ve conducted my life." He added that Zervos had emailed Trump's office this past April 14 to ask if he could visit her restaurant in California.

Allred, who frequently represents women bringing sexual harassment and assault claims, said “many more women” have contacted her regarding the Republican nominee after a video emerged of Trump making lewd comments about women in 2005 – comments Trump apologized for, but dismissed as “locker room talk.”

Allred said Zervos is not filing a suit at this time.

Earlier Friday, The Washington Post reported on a woman’s claim that Trump put his hand up her skirt and groped her at a Manhattan nightspot in the early '90s.

According to the Post, Kristin Anderson claimed that while she was at the Manhattan nightspot in the early 1990s, Trump slid his fingers under her miniskirt and fondled her.

Campaign spokeswoman Hope Hicks called Anderson's claim a "total fabrication." She said in a statement, "It is illogical and nonsensical to think Donald Trump was alone in a nightclub in Manhattan."

The new allegations capped a tumultuous week on the campaign trail for Trump, who has faced a daily drip-drip of allegations even as he has tried to focus on Bill Clinton's female accusers -- and the massive leak of Clinton campaign emails by WikiLeaks.

As Zervos was making her accusations Friday, Trump was at a rally in Greensboro, N.C., rejecting all the allegations against him as “total fiction.”

“I have no idea who these women are,” Trump said. “The stories are total fiction. They’re 100 percent made up.”

He continued to expand on his argument that the claims are part of a conspiracy involving the Clinton campaign and what he calls “the corrupt media” – in particular the New York Times, which kick-started the reports of sexual misconduct earlier this week. Trump previously threatened to sue the Times over allegations they published from two women who claim Trump groped them.

On Friday, Trump went after the Times again, suggesting the reporters were acting at the behest of billionaire Carlos Slim, the largest shareholder in the Times.

“Now, Carlos Slim, as you know, comes from Mexico. He’s given many millions of dollars to the Clintons and their initiatives,” Trump said. “Reporters at The New York Times, they’re not journalists. They’re corporate lobbyists for Carlos Slim and for Hillary Clinton.”

Trump then claimed the controversy was “a total setup” consisting of “lies spread by the media” as a way to undermine his campaign. He went so far as to mock his accusers, making fun of one who told the Times he groped her on an airplane in the early 1980s.

“The only way they can figure they can slow it down is to come up with people that are willing to say ‘Oh I was with Donald Trump in 1980,’” he said, putting on a voice mocking his accusers. “'I was sitting with him on an airplane and he went after me on the plane.’ Yeah, I'm gonna go after you…”

“Believe me,” he added. “She would not be my first choice, I can tell you.”

One of the accusers who came forward earlier this week, Mindy McGillivray of Palm Springs, Fla., told the Palm Beach Post Friday that she was planning to leave the United States because she feared for her family’s safety. She told the paper cars had been driving around her house.

As Trump ratched up his attacks Friday on the media and his accusers, Democrats have been seizing on the accounts as proof that Trump is unfit for office. On Thursday, first lady Michelle Obama launched a scathing attack on the billionaire and the comments he made on the 2005 tape.

On Friday, President Obama followed up, saying Trump was determined to “drag this election as low as he can possibly go” and warned that “democracy is on the ballot” in November.