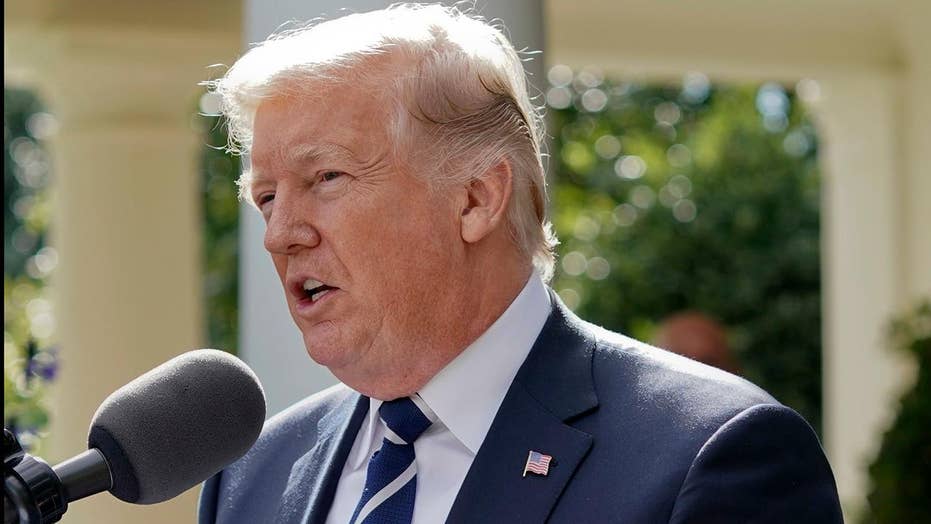 The president says he fully understands why Clinton didn't win.

President Trump hammered Hillary Clinton on Monday for her defense of NFL players protesting the national anthem, saying that kind of “thinking” is why she lost the election.

He also repeated his early-morning call on Twitter for Clinton to run again. “Oh, I hope Hillary runs. Is she going to run? I hope. Hillary, please run again,” Trump said.

Clinton, in an interview Sunday during her overseas tour promoting her new campaign memoir, said kneeling during the national anthem is a “reverent” position that is not against “our anthem or our flag.” Clinton warned that people should resist “what are very clear dog-whistles” to excite the Trump base, citing the NFL-White House feud.

HILLARY DEFENDS KNEELING NFL PLAYERS, SAYS 'THAT'S NOT AGAINST OUR ANTHEM OR FLAG'

“That’s what black athletes thought kneeling was all about,” she said in response to a question about ways to resist the White House. “That’s not against our anthem or our flag. Actually, kneeling is a reverent position. It was to demonstrate in a peaceful way against racism and injustice in our criminal system.”

“I mean, look, there are a lot of reasons that she didn’t win, including the fact that she was not good at what she did,” Trump said Monday. “But I will tell you, that is something that I had just heard about and I think her statement, in itself, is very disrespectful to our country.”

The former secretary of state has given little indication that she has plans to launch a third White House bid.

The White House-NFL feud has dominated the headlines for weeks. Trump spurred the controversy during a rally in Alabama last month, when he called for players to be fired if they disrespected the flag, drawing criticism from NFL players and even NFL Commissioner Roger Goodell.

Trump seemed to soften his tone during the press conference on Monday, suggesting suspension, rather than termination, as a proper punishment.

“The NFL should have suspended some of these players for one game –not fire them—suspend them for one game. And then if they did it again, it could have been two games, then three games, then for the season,” Trump suggested. “You wouldn’t have people disrespecting our country right now.”