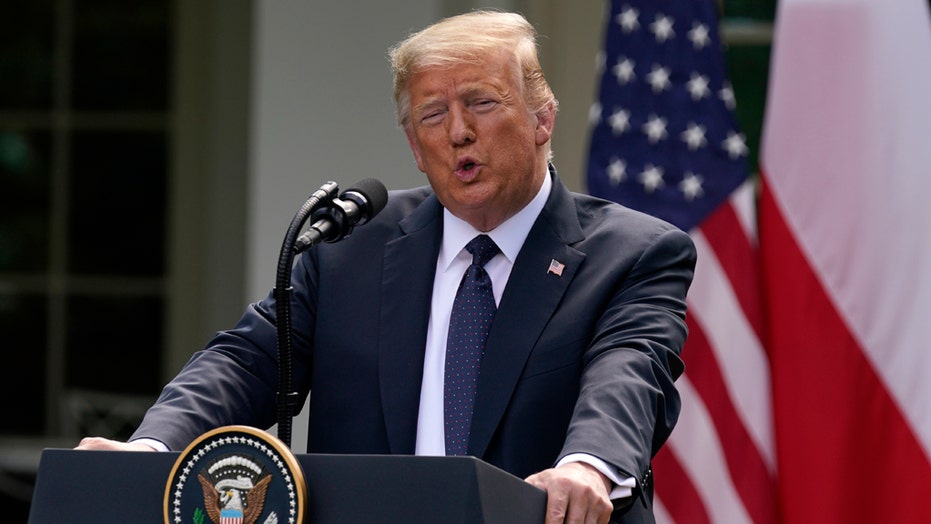 President Trump announced Friday that he signed an executive order to protect American monuments, memorials and statues and threatened those who try to pull them down with “long prison time.”

“I just had the privilege of signing a very strong Executive Order protecting American Monuments, Memorials, and Statues - and combatting recent Criminal Violence,” Trump tweeted. “Long prison terms for these lawless acts against our Great Country!”

The new order enforces laws prohibiting the desecration of public monuments, the vandalism of government property, and recent acts of violence, withholds federal support tied to public spaces from state and local governments that have failed to protect public monuments, and withdraws federal grants for jurisdictions and law enforcement agencies that fail to stop their desecration.

It also provides assistance for protecting the federal statues.

Meanwhile on Friday evening, Attorney General Bill Barr directed the creation of a task force to counter anti-government extremists, specifically naming those who support the far-right “boogaloo” movement and those who identify as Antifa.

The task force will be headed by Craig Carpenito, the U.S. Attorney for the District of New Jersey, and Erin Nealy Cox, U.S. Attorney for the district of Northern Texas, and will be composed of U.S. Attorneys’ Offices, the FBI and other relevant departments, according to a press release. The group will share information with local and state law enforcement and will provide training on identifying anti-government extremists, according to an internal Justice Department memo.

The president has been teasing his order related to memorials all week, as historic monuments and statues have become the targets of anger and vandalism during Black Lives Matter protests in the wake of George Floyd's police custody death in Minneapolis at the end of May.

On Friday night, protesters plan to try to tear down the Emancipation Statue of Abraham Lincoln in Lincoln Park. The statue shows the 16th president holding the Emancipation Proclamation next to a kneeling, shackled slave. Protesters say it does not depict the role slaves had in securing their own freedom.

Last weekend protesters tied ropes and tried to topple a statue of former president Andrew Jackson in Lafayette Square Park, but were stopped by law enforcement.

This week McConnell listed the monuments that have been defaced in recent days—noting that in Portland, Ore., a mob “graffitied a statue of our first President, pulled it down, and burned an American flag over his head. This is George Washington.”