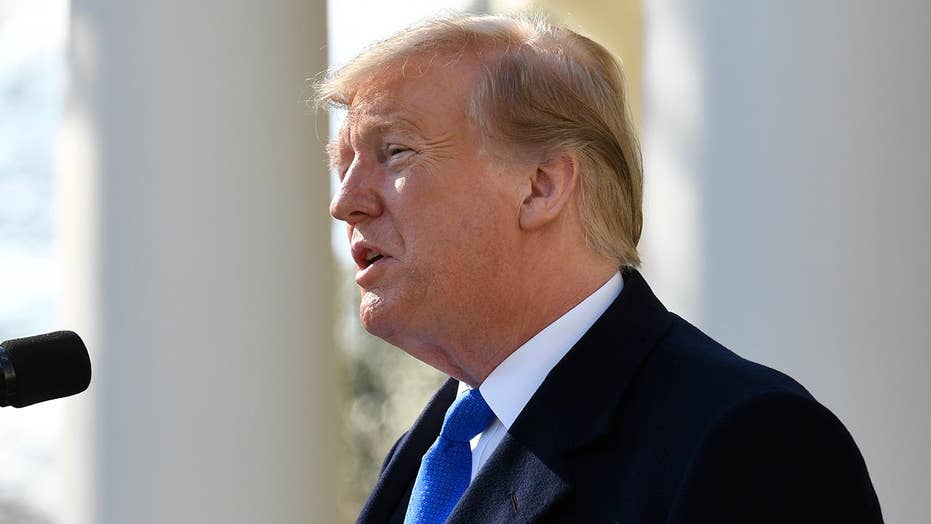 What comes next once President Trump has declared a national emergency?

President Trump on Friday shared a highlight reel of Democratic lawmakers looking less than pleased at the State of the Union, with the track of R.E.M.'s melancholy "Everybody Hurts” echoing in the background.

Trump, after declaring a national emergency on the Southern border Friday, shared the video, originally created by pro-Trump Twitter user Carpe Donktum, who is a self-described “Eternally Sarcastic Memesmith.”

The video begins with Trump walking into the House Chamber on the night of his State of the Union address last week. The video cuts from Rep. Eric Swalwell, D-Calif.; to Sen. Elizabeth Warren, D-Mass.; to Rep. Ilhan Omar, D-Minn., while she holds her head in her hands; back to the president shaking hands with lawmakers as he walks down the aisle to the lectern.

The video then goes to Sen. Kamala Harris, D-Calif., pans down a row of Sens. Ron Wyden, D-Ore., Cory Booker, D-N.J., and Bob Menendez, D-N.J.—none of them look happy---and goes back to the president.

“Madame Speaker, members of Congress, the state of our union is strong,” Trump says, the video first zooming in on Sen. Bernie Sanders, I-Vt., with a blank stare; and cutting to Sen. Kirsten Gillibrand, D-N.Y., who seemingly lets out a large sigh and eye roll when listening to Trump.

The video cuts to Sen. Mazie Hirono, D-Hawaii, and over to the only Republican featured in the video—Sen. Mitt Romney, R-Utah.

The video, which lasts for 2 minutes and 20 seconds, concludes with an extended zoom-in on Romney’s face as he applauds.

R.E.M. has previously demanded that Trump stop using their songs at his events and rallies. During the 2016 presidential campaign, after Trump used one of their songs at a rally, Mike Mills, a founding member of the band, tweeted: "Cease and desist." The band's lead singer, Michael Stipe, also demanded that neither Trump, nor Sen. Ted Cruz, R-Texas, use their songs.

"Do not use our music or my voice for your moronic charade of a campaign," Stipe said in a quote to The Daily Beast in 2016.

The Twitter user who created the video has created several similar pro-Trump videos.

"I am very honored that [the president] has taken the time to see my work and I am glad that he enjoyed it," the Twitter user said in a message to Fox News. "I have been making memes in support of his presidency and in support of MAGA for 2+ years and I will continue to do so. Thank you President Trump!"

The president shared the tweet just hours after he signed a border security spending package for $1.4 billion, and declared a national emergency at the U.S.-Mexico border. The White House plans to move $8 billion in currently appropriated or available funds toward construction of the wall. Of that, $3 billion could be diverted with help from the emergency declaration.