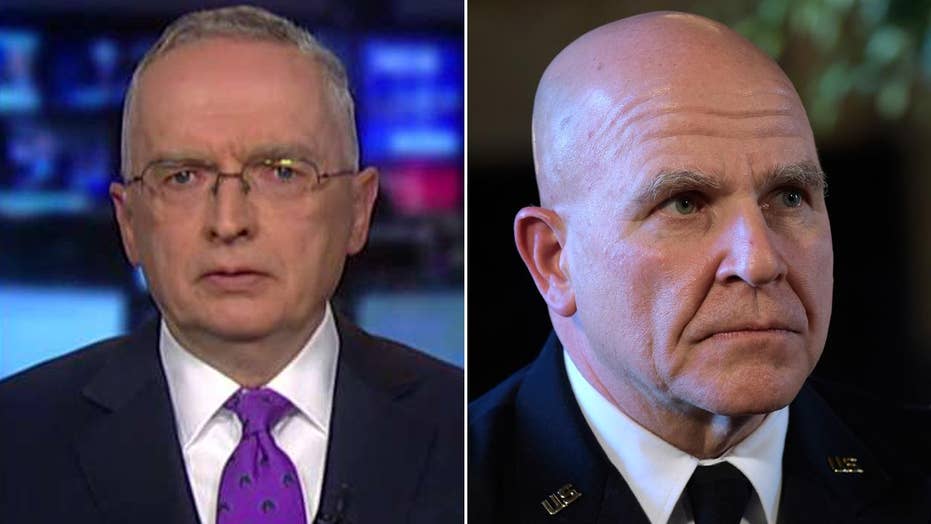 President Trump on Monday tapped Army Lt. Gen. H.R. McMaster, a warrior-scholar deemed an expert in counter insurgency, to be the director of the White House's National Security Council.

The 54-year-old McMaster replaces retired Army Lt. Gen. Michael Flynn as the president’s national security adviser. Flynn was forced to resign after lying about talking to Russia, before he officially took the NSA post, about recently imposed sanctions.

“He is a man of tremendous talent and experience,” Trump said in announcing McMaster’s appointment. “He’s highly respected in the military, and we're lucky to have him.”

Trump also announced that Lt. Gen. Keith Kellogg will remain as the NSC’s chief of staff.

“I’m proud to continue my service to the nation,” said McMaster, sitting next to Trump inside the president’s Florida resort home Mar-a-Lago.

Trump on Sunday interviewed several NSC candidates, in an attempt to solidify the intelligence team, days after calling for Flynn’s resignation.

McMaster is a Philadelphia native and West Point graduate who fought in the Persian Gulf War and served in Iraq and Afghanistan.

“This is a great team,” Trump said. “The country is honored to have two people like this, and after having met so many people in the military, we're lucky to have all of them.”

Trump also thanked the others he interviewed this past weekend including former U.S. Ambassador to the United Nations John Bolton.

The president said Bolton has “a good number of ideas that I agree with very much" and that he will work for him in a “different capacity.”

McMaster is currently director of the Army Capabilities Integration Center. He joined the Army in 1984 and distinguished himself seven years later during the Gulf War in what would become known as the Battle of 73 Easting.

As captain of the 2nd Armored Cavalry Regiment's Eagle Troop, McMaster led a force of just nine tanks that took out more than 80 Iraqi Republican Guard tanks and armored vehicles.

He is the author of the 1997 book, "Dereliction of Duty," which criticized the U.S. government's handling of the Vietnam War.

In his latest role, McMaster was tasked with gauging the U.S, military capability against future threats. When he addressed lawmakers in April of last year, he warned that years of military cuts have left the U.S. vulnerable.

“We are outranged and outgunned by many potential adversaries,” McMaster said. “[And] our army in the future risks being too small to secure the nation.”