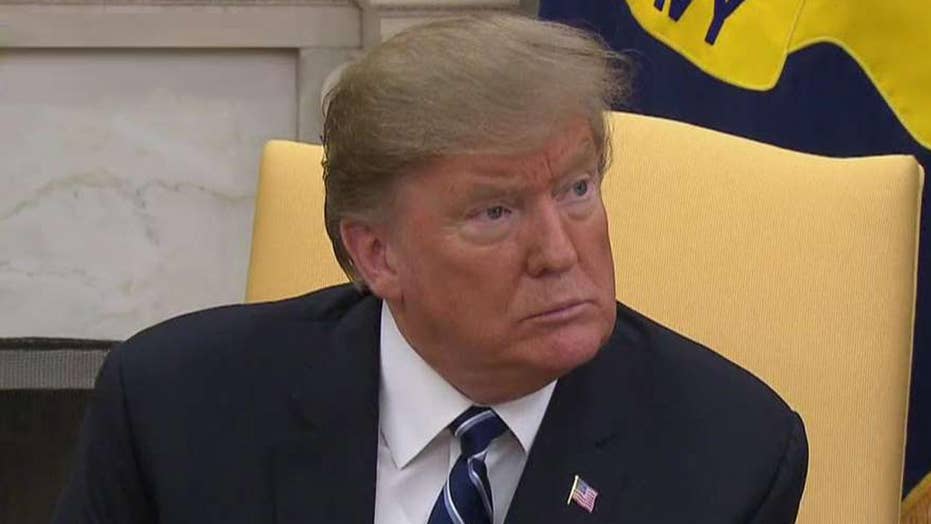 Trump meets with Austrian Chancellor Sebastian Kurz and answers questions from the press.

President Trump declared Friday that “there should be no Mueller Report,” blasting the special counsel's Russia investigation as “illegal” and “conflicted” following the release of new details about the early days of the probe.

“So, if there was knowingly & acknowledged to be ‘zero’ crime when the Special Counsel was appointed, and if the appointment was made based on the Fake Dossier (paid for by Crooked Hillary) and now disgraced Andrew McCabe (he & all stated no crime), then the Special Counsel should never have been appointed and there should be no Mueller Report,” Trump tweeted Friday morning.

“This was an illegal & conflicted investigation in search of a crime. Russian Collusion was nothing more than an excuse by the Democrats for losing an Election that they thought they were going to win,” he continued. “THIS SHOULD NEVER HAPPEN TO A PRESIDENT AGAIN!”

The president’s tweets come as speculation mounts over when Special Counsel Robert Mueller’s team will complete the investigation and submit a report to Attorney General William Barr.

The latest signal that the investigation could be coming to a close is the expected departure of top prosecutor Andrew Weissmann, who led the charge on the case against former Trump campaign chairman Paul Manafort. As of this week, Manafort will face 81 months in prison.

ANDREW WEISSMANN, A TOP PROSECUTOR ON MUELLER TEAM, TO LEAVE SPECIAL COUNSEL'S OFFICE 'IN NEAR FUTURE'

The special counsel’s office confirmed to Fox News on Thursday that Weissmann will be leaving Mueller’s team “in the near future.” A spokesman for New York University Law School also told Fox News Thursday that they were in talks with Weissmann, who had done work with the university in the past, to return to the Law School.

Whenever Mueller does submit his report, Barr will review it and is expected to create his own report to send to Republican and Democratic leaders of the Senate and House Judiciary Committees to explain the special counsel’s findings. The attorney general is ultimately the official who decides what, if anything, in the report can become public.

In her testimony, Page confirmed that FBI officials had little evidence at the start of the investigation in August 2016.

Page said that the FBI “knew so little” about whether the allegations were “true or not true,” and had a “paucity of evidence because we are just starting down the path” of vetting the allegations.

Strzok and Page, who came under fire after it was revealed they exchanged numerous anti-Trump text messages, both worked on the FBI’s initial investigation into Russian meddling and potential collusion with Trump campaign associates during the 2016 presidential election. The two also served, for a short period of time, on Mueller’s team.