President Trump says White House chief of staff John Kelly will leave his job at end of the year.

President Trump on Saturday said that White House Chief of Staff John Kelly will leave his position at the end of the year -- after swirling rumors that Kelly's 17 month-long tenure in the Trump administration was nearing its end.

Trump spoke to reporters outside the White House, called Kelly a "great guy" and said his replacement will be announced in the next few days.

"John Kelly will be leaving at the end of the year, we will be announcing who will be taking John's place, it might be on an interim basis, I'll be announcing that over the next day or two," he said.

"I appreciate his service very much," he added.

Kelly, who previously served as Department of Homeland Security secretary, was widely reported to have been considering leaving his post. Trump had previously said Kelly would stay until 2020. The announcement comes amid a wider shakeup of staff by President Trump. On Friday, he announced that he had picked William Barr for attorney general and Heather Nauert for U.N. ambassador.

Nick Ayers, currently Vice President Mike Pence's Chief of Staff, is understood to be President Trump's choice to take over. A source close to Ayers told Fox News that Ayers and Trump have been in discussions for months about him stepping into the role, but Trump wants a two year commitment -- something that Ayers, who has three children at home under the age of six, is unable to commit to.

Kelly, 68 moved over to the White House in July 2017 to replace former Republican National Committee Chairman Reince Priebus as chief of staff. 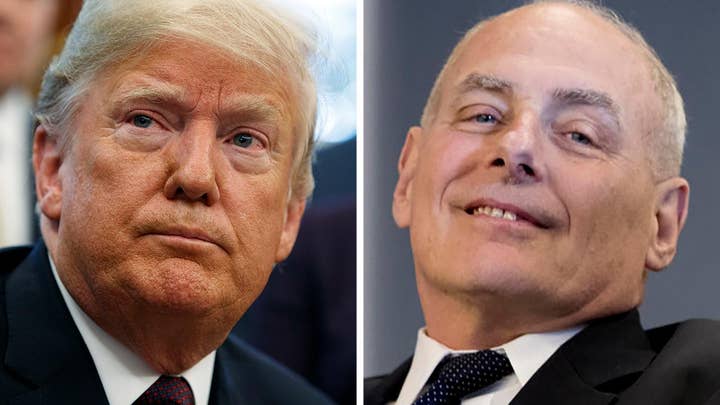 The retired four-star Marine Corps general has joked publicly that working for Trump is the hardest job he’s ever had, including those on the battlefield.

Kelly has brought order to a chaotic White House, which has seen a historically fast turnover in multiple high-profile jobs—like White House communications director, national security adviser, and more. Kelly’s role, though, has lessened in recent months as the president has instead followed his own counsel, and added like-minded aides to his staff.

Over the summer, the president said that he and Kelly were “getting along very well,” and called his chief of staff “a wonderful man,” amid reports and rumors that Kelly’s White House departure was imminent as the relationship between the two had deteriorated.

The president, at the time, said that he didn’t know whether Kelly would leave, but said “I like John a lot. I like him and I respect him.”

"Service to America is part of his DNA, and our country is better for his duty at the White House. During this time he has become a dear friend and trusted partner. He was a force for order, clarity, and good sense. He is departing what is often a thankless job, but John Kelly has my eternal gratitude,” Ryan said in a statement.

But after the midterm elections in November, Trump said “let’s see what happens,” about Kelly’s future at the White House, during an interview on “Fox News Sunday.”