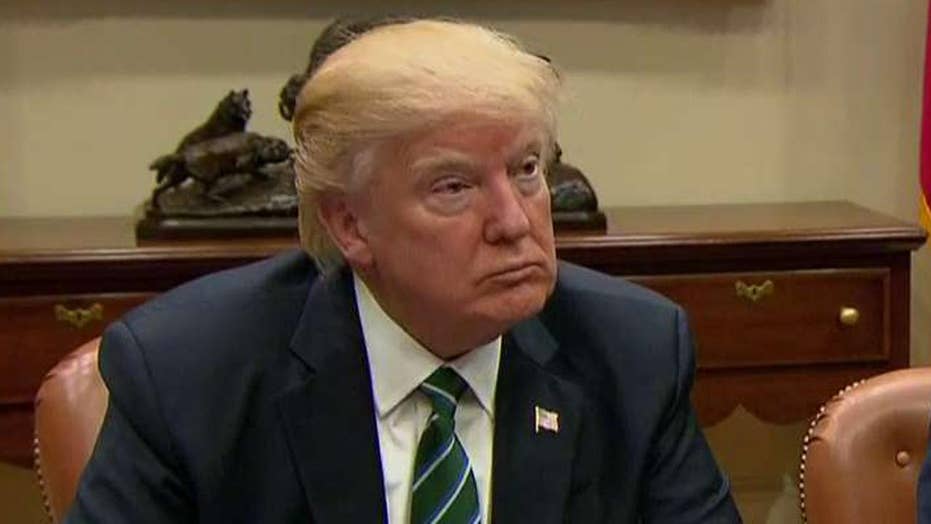 President Trump says plan to fix VA is ahead of schedule

President Trump said Saturday that he had a “great” meeting with German Chancellor Angela Merkel, dismissing as “fake news” reports about a difficult first visit, while continuing to criticize the country for its limited support of NATO.

“Despite what you have heard from the FAKE NEWS, I had a GREAT meeting with German Chancellor Angela Merkel,” Trump said in a two-part tweet. “Nevertheless, Germany owes vast sums of money to NATO & the United States must be paid more for the powerful, and very expensive, defense it provides to Germany!”

The Saturday morning tweets have become a familiar part of Trump’s media strategy. And with 26.7 million followers, he has found a way to sidestep traditional media to challenge stories that he considers unfair, incorrect of simply “fake.”

News reports that Trump and Merkel struggled during her White House visit Friday is in part the result of the world leaders not shaking hands before reporters during a photo op in the Oval Office.

And later, during a joint news conference, Trump pushed back against the notion in Europe that his "America First" agenda means he's an isolationist, calling such a suggestion "another example of, as you say, fake news."

Merkel maintained her composure even when Trump repeated his contention that former President Obama may have tapped his phones in Trump Tower. He sought to turn the explosive charge into a light joke when he said to Merkel, “At least we have something in common, perhaps," referring to 2013 reports that the U.S. was monitoring Merkel's cellphone conversations.

As a candidate, Trump frequently accused the chancellor of "ruining" Germany for allowing an influx of refugees and other migrants from Syria and accused his campaign rival, Hillary Clinton, of wanting to be "America's Angela Merkel."

Trump also reaffirmed the United States’ "strong support" for NATO but reiterated his position that NATO allies need to "pay their fair share" for the cost of defense.

Though he said many countries owe "vast sums of money," Trump declined to identify Germany as one of them.

When the topic moved to trade, Trump said the U.S. would do "fantastically well" in its trade relations with Germany. The president has been deeply critical of foreign trade and national security agreements but suggested he was only trying to revise trade deals to better serve U.S. interests, rather than pull back from the world entirely.